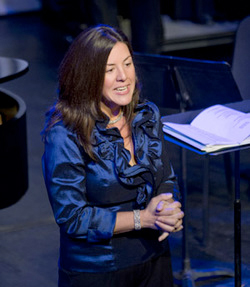 Founded in 1892 and now the oldest continuing performing organization in town, the all-male Singers’ Club of Cleveland has continued to make history by recently appointing Natalie Mallis as its first woman director. “They’ve had female guest conductors before, but no one has been around for the whole rodeo,” Mallis noted in a recent telephone conversation.

Mallis, who holds degrees from Kent State and Bowling Green State Universities and is a doctoral candidate in choral conducting at the University of North Texas, began meeting with the leadership of the Singers’ Club at the beginning of June.

“It was interesting to get to work with the board of the organization even before getting to work with the singers,” she said. “It was essential for planning a good transition. We got to know each other in terms of style and communication. Concerns came up and were talked about and people were very honest. It’s gone very well. They’ve been open and accepting throughout a lengthy audition and interview process.”

Mallis spent the summer digesting the history of the club, a process she described as a learning curve. The organization is one of a number of historic male choruses operating outside of colleges and universities in the United States — links to 15 of them are displayed on the Club’s web page. “At least three-quarters of the group is constant,” Mallis said, “people who have sung with the Club for 30 to 40 years.” Because the average age of its current membership is 50 and above, attracting young singers is high on Mallis’ list of priorities. “We don’t want tradition to become routine.”

One initiative is a scholarship program. “College students can sing with us and experience the social benefit of the Singers’ Club, which offers a male camaraderie that can’t be ignored.” Other techniques being explored are the repertoire the Club presents, “and how we educate the audience. We don’t just want to sing at them, but bring them into what we do,” Mallis said.

Over a century and a quarter, the Singers’ Club has developed a loyal following. “I’ve been told that the first concert is already sold out, which is a good problem to have,” Mallis said. That program, on December 10 at the Breen Center in Ohio City features music that Mallis said conveys the “sights, sounds, and smells of Christmas” in traditional Boar’s Head and Wassail carols, including an audience sing-along. It also throws a few challenges at the singers in pieces like Charles Gounod’s Veni Creator, “an unaccompanied piece in a less-familiar genre.”

Fans of the Singers’ Club who were too late to buy tickets to the December performance have two more opportunities to enjoy male chorus music this season.

On March 4, the chorus will present a program called “There’s No Place Like Home.” Mallis describes the concept of the concert as an attempt to blend the familiar with the old and find common ground in folk music from around the world and in music by Stephen Foster, Aaron Copland, Franz Schubert, and Russian composers. “We’ll include songs about being homeward-bound from wars, and about what home means to people — a place where you can be your authentic self,” she said.

“Rock Around the Clock,” may seem an unlikely title for the May 20 program, but Mallis explains that it refers to a list of composers who were the Rock Stars of their respective generations: Josquin, Palestrina, J.S. Bach, Brahms, the Beatles, and Queen. “That concert will celebrate our 125th birthday and begin our anniversary season. We have committees already working on that celebration,” Mallis said. “We’re commissioning a piece by a yet-to-be-revealed Cleveland-based composer, and we’ll bring back pieces from the Singers’ Club’s very first concert.”

What did the men sing back in 1892? “A lot of Mendelssohn, and bigger works by well-known composers,” Mallis said. “They usually programmed fewer pieces in the first few seasons, and included guest artists, soloists, and additional pianists. That provided a contrast to the great wall of sound a men’s chorus can produce.”

END_OF_DOCUMENT_TOKEN_TO_BE_REPLACED

Concerts cancelled in 2020 may have put a brief gap in Ling’s record with the Orchestra (a program every season since 1984-1985), but the ensemble’s former resident conductor more than made up for it Sunday with a performance both commanding and personal. END_OF_DOCUMENT_TOKEN_TO_BE_REPLACED