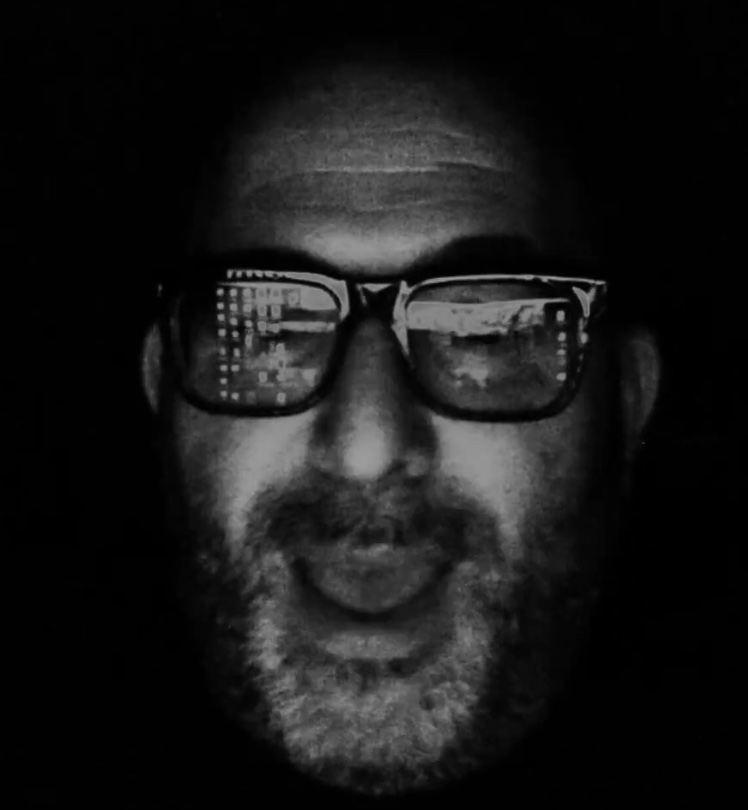 Appearing on-screen as a talking head, artistic director Timothy Beyer delivered an opening monologue worthy of Saturday Night Live. “It might come as a surprise that avant-garde music ensembles are not particularly well-funded,” he drolly said, while periodically a cute, colorful kitten flashed by.

As a dim light cast shadows across a grand piano, Nicholas Underhill introduced William Grant Still’s mystical-sounding Seven Traceries. The pianist brought wonderful phrasing and an even, burnished sound to “Cloud Cradles,” while “Mystic Pool” was defined by even more exquisite phrasing and subtle dynamic contrasts. The fast, dancing passages during the brief “Muted Laughter” twinkled, and his interpretation of “Out of Silence” was appropriately romantic, while “Woven Silver” conjured up visions of fairies in the forest. Underhill found an attractive simplicity in “Wailing Dawn,” and flawlessly negotiated the dancing scale passages during the concluding “A Bit of Wit.” 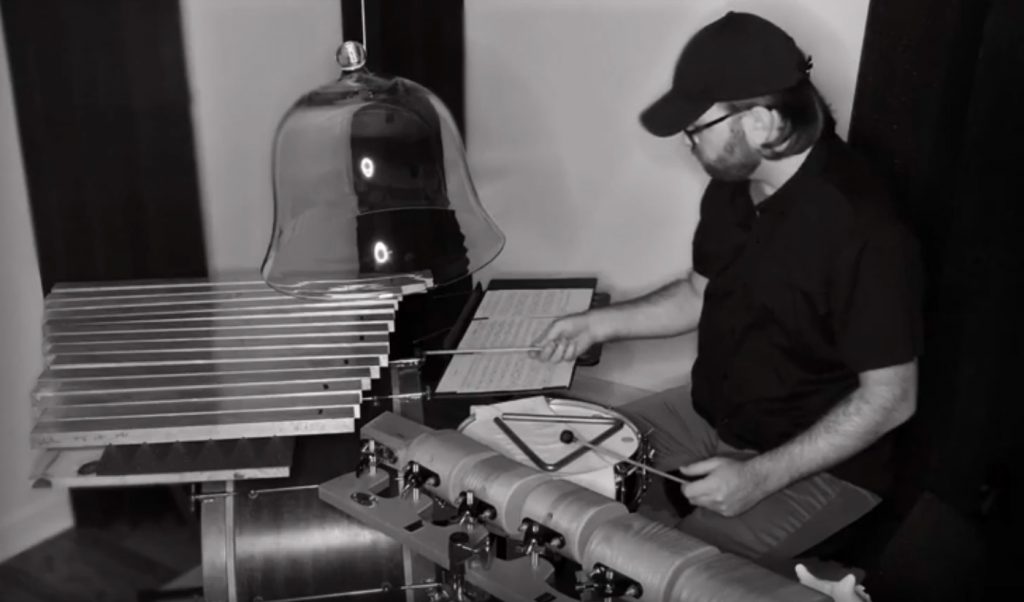 Without introduction, No Exit percussionist Luke Rinderknecht launched into the world premiere of his Downfall (a collage). The compelling eight-minute work is a demonic re-imagining of London Bridge Is Falling Down. The sound of a conch shell and single, soft strikes on the bass drum open the piece. Tapping rhythms on its rim gradually expand into a syncopated, off-kilter march. Rinderknecht introduces a minor-keyed London Bridge played on a set of tuned metal bars, repeated on the temple blocks. Tapping on a hanging lampshade provides a color change, while snare drum adds accents to the rhythm. Repeated conch shell drones and single bass drum notes bring the commentary on the current state of world affairs to a somber conclusion.

From a wood-paneled room, Sean Gabriel introduced Harald Genzmer’s Sonata for solo flute, noting that he first heard the composer’s music while in high school. Playing with a clear, unblemished tone and impeccable intonation, Gabriel highlighted the semi-improvisatory nature of the opening “Andante.” He was clearly having fun during the energetic “Vivace amabile” and in the slow, translucent third movement, the short flourishes sparkled. The final “Presto” is in the vein of Hindemith, with whom Genzmer studied. Gabriel played the catchy melody — along with quick, short, articulated passages that make their way across the full range of the instrument — with aplomb.

The screen during the brief intermission featured the silent, motionless face of No Exit associate director/composer James Praznik — or was it Charles Manson? 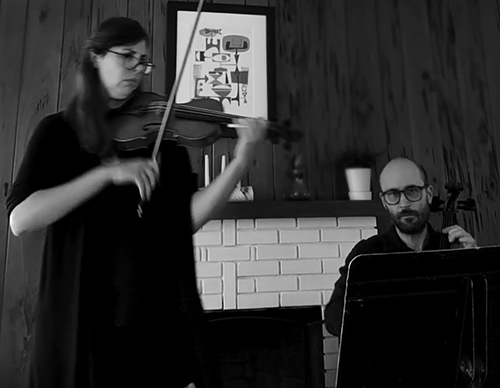 The only duo of the concert came from cellist Nicholas Diodore and violinist Cara Tweed. Performing from their living room, the players’ innate sense of rhythm and abundant technique served them well during Heitor Villa-Lobos’ Deux Chôros. During the work’s two movements, “Moderé” and “Lent-animé,” the composer brilliantly juxtaposes folk idioms with modernism, which Diodore and Tweed presented with authority, spontaneity, and passion.

Speaking from a park in Columbus, Ohio, composer Adam Roberts said that he wrote the solo viola work Bell Threads for Garth Knox around the time of his own grandmother’s passing. The piece is both an elegy for her and “a tribute to the beautiful instrument that is the viola.”

The alluring work contrasts soft, melodic lines with a range of harmonics and glissandi that create a kaleidoscope of sound. Throughout the piece, the viola remains muted, adding a darker tone to the ethereal feel. James Rhodes’ performance was magically subdued. Not a note or musical gesture was out of place, creating a smooth, seamless flow from beginning to end.

No Exit’s marketing materials have for a long time featured black and white photos of the players in stoic, emotionless poses, so the film noir concept is a natural progression — one that succeeded brilliantly in providing a unified look and feel to the production.