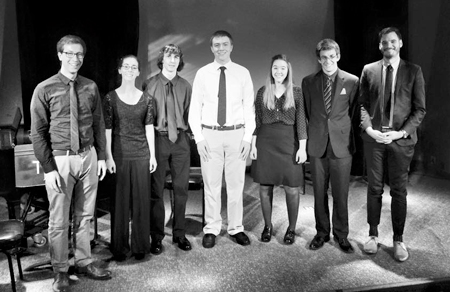 Hearing a concert featuring six premieres is not unusual. However, when those new works are all written by high-school age composers, that is a reason to take note. On Sunday afternoon, May 15, a capacity crowd gathered at the Bop Stop to hear an impressive concert that featured works by students in the Northern Ohio Youth Orchestra Young Composers Program. The concert also included performances by ensembles from NOYO’s Chamber Music Extension.

Introducing his Quintet for Piano, Cello, Clarinet, Violin, and Flute, David Coy said that the instruments represent a group of people, with the piano acting as the authority figure. The well-structured, engaging work is full of triplet figures and lush harmonies. A piano cadenza leads nicely into the concluding section.

Maggie Butler’s The Forest in Springtime for cello duo evokes emotions she felt while playing in the woods as a child. Butler, also a cellist, joined Ultan for the performance. The work begins with a baseline in the lower voice, and an inventive, folk-sounding melody joins in. 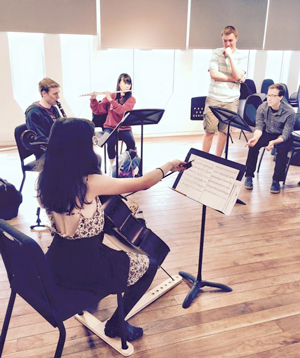 Like an exchange between people meeting for the first time, Brian Pinter’s Conversations Among Strangers for violin and cello unfolds slowly, beginning with an ostinato bass line. But as the people get to know each other, the conversations pick up and quickly become animated with double stops and pizzicatos.

Angeline Monitello’s Duet for Flute and Clarinet is a lovely work in three movements: the very melodic “Rainfall,” “Snowfall” — an elegy depicting a snowy morning — and the lilting “Sunrise.”

Speaking about her work, Claire Dyson said that Serendipity for violin and cello had many incarnations, and the fact that the piece came together at all is serendipity. The piece contains some beautiful lyrical writing for both instruments, the lines weaving in and out of one another.

“I didn’t know this was a horrible key for the cello, so give her a break,” Jake Jordan told the audience while introducing his Piano Trio in E-flat, a well-written work early classical in style. Jordan has obviously studied the music of Haydn and Mozart. 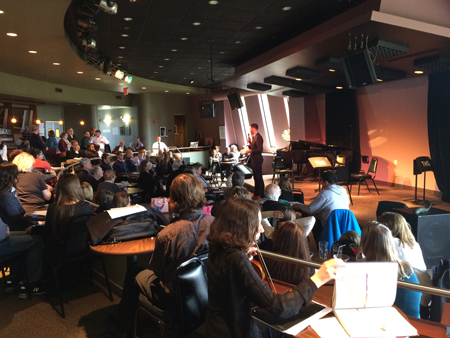 There was some very good playing by violinists Alison Chan and Karah Chapel, violist Stephanie Vento, and cellist Hannah Ross during the four movements of Variations on a Russian Folk Song (no composer identified).

With its many technical challenges, Rossini’s Sonata No. 1 in G is not an easy piece, but violinists Ruby Niemojewski and Emily Reyes, cellist Cecelia Ross, and bassist Cade Grant admirably rose to the occasion.

Maya Shane and Jessica Tonclear, violins, Natalie Brennecke, viola, and Maggie Butler, cello, brought a full sound along with nice mood and tempo changes in the “Intermezzo” from Grieg’s String Quartet No. 1 in g, Op. 27.

Published on ClevelandClassical.com May 25, 2016.

END_OF_DOCUMENT_TOKEN_TO_BE_REPLACED

Rodgers & Hammerstein’s Cinderella was originally produced for television in 1957 — seven years after the animated Disney film was released — and starred Julie Andrews. According to the Rodgers & Hammerstein website, it was viewed by over 100 million people. END_OF_DOCUMENT_TOKEN_TO_BE_REPLACED

The story line has its origin in an 1855 play and an 1842 farce that Thornton Wilder mined for his 1938 play The Merchant of Yonkers. When that turned out to be a flop, in 1954 Wilder made the crucial decision to re-center the show around the character of the legendary marriage broker Dolly Gallagher Levi and renamed it The Matchmaker. END_OF_DOCUMENT_TOKEN_TO_BE_REPLACED

The Dodero Center for the Performing Arts at the Gilmore Academy in Gates Mills is one feature of an impressive campus. The auditorium is shallow, the stage is deep, and the ensemble played without a shell. Throughout the program, the sound, especially in instruments’ lower registers, tended to disappear. END_OF_DOCUMENT_TOKEN_TO_BE_REPLACED