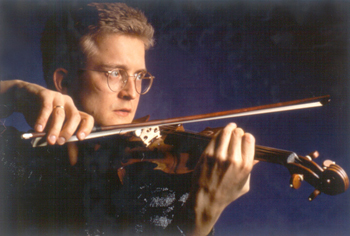 German violinist Christian Tetzlaff never shies away from a challenge. He made his debut with The Cleveland Orchestra at the age of 22, playing the daunting concerto by Arnold Schoenberg. Tetzlaff’s most recent area performance in May of this year, also with The Cleveland Orchestra, featured the violinist in Jörg Widmann’s concerto, a physically taxing work written for him in 2007.

Tetzlaff will return to Northeast Ohio on Friday, October 30 at 8:00 pm in Finney Chapel on the campus of Oberlin College for a performance of challenging works for solo violin. The concert, presented as part of Oberlin’s Artist Recital Series, now celebrating its 138th season, will include Eugène Ysaÿe’s Sonata, Op. 27, No. 1 in g, Johann Sebastian Bach’s Sonata No. 3 in C, BWV 1005, selections from György Kurtág’s Signs, Games and Messages, and Béla Bartók’s Sonata for Unaccompanied Violin.

“There are only a few great composers for the solo violin, so making a program out of Bartók, Ysaÿe, and Bach is a very obvious choice,” Tetzlaff said during a telephone conversation from California, where he was performing Shostakovich’s first concerto with the San Francisco Symphony. “The real beauty of these works is that we have three pieces that are very different, and the biggest of them, the Bartók sonata, looks back to both of the composers before.” In his programming Tetzlaff also tries to make tonal connections between the pieces. “The Bach C-major sonata, unlike the dark, d-minor partita, goes over to the brighter, more joyous side. The Bartók is in g minor like Bach’s first solo sonata, and the Ysaÿe returns to the key of g minor.”

Tetzlaff said that when people see a name they don’t know on the program, they often become worried, but no one should be afraid of Kurtág’s Signs, Games and Messages because Kurtág is such a great communicator. “This is a set of diverse pieces. The first one is a hommage to J.S. Bach. Even though the Kurtág  was written many years later, it is like an introduction to the Bartók solo sonata. There in a nutshell you will find the characters and ideas of the Bartók. I think the set should work nicely on this program.”

I mentioned that the Bartók is about half an hour long and demands great concentration and physicality. “I hope I will be able to do it in 26 minutes,” Tetzlaff responded quickly. “It is a heart and muscle piece that’s fiendishly difficult. I’ve been playing it regularly for 33 years, and I feel that I’m getting a little more on top of the piece than I did in the previous decades. I’ll never manage to conquer it completely, but I’m proud to get close.”

Similarly, Tetzlaff has taken a step-by-step approach to building his career. At the age of eighteen he was awarded the second prize in a major German competition which included professional management. Instead of embarking on a solo career, the young violinist chose to attend the Cincinnati Conservatory to continue his studies with the renowned teacher Walter Levin. “I was so young, what else should I have done but study? It never makes sense to rush things. Parents and teachers often think that students should embark on a performing career when they are very young. That doesn’t make sense. I think you need experience and a life before you can really talk about music. I had a very nice and quiet time in Cincinnati. I lived with a wonderful guest family who are coming to Oberlin for the recital.”

At the other end of Ohio, The Cleveland Orchestra played an important role in launching Tetzlaff’s career. At the age of 22 he auditioned for Christoph von Dohnányi with the Tchaikovsky concerto. “After he heard me Dohnányi said ‘yes, let’s do something’, but then he saw the Schoenberg on my repertoire list, so that’s what I ended up playing. But my next gig in Cleveland was with the Tchaikovsky.”

Tetzlaff said that his most recent appearance at Severance Hall in the Widmann concerto was an amazing experience. “His violin concerto is a deep piece, and while it may take a while to thoroughly enjoy the darkness of it, I find that many people do get a deep and strong impression from it. I always find that Widmann’s music communicates with an audience, and without that communication my job is not so fun.” Indeed, Tetzlaff appeared to have great fun with the piece. As ClevelandClassical reported,

Beginning with a dramatic solo gesture, Tetzlaff launched into a lengthy and animated colloquy with the orchestra that explored a vast range of emotional affect from the wistful to the deranged. Dancing from foot to foot and eventually traversing the entire range of the instrument, the violinist continually proposed new topics, some of which were pursued by the orchestra.

As passionate as he is about music in general, Tetzlaff becomes especially ardent when discussing music education. In an interview, the violinist once proposed the idea of creating a music education project entitled “Love” in which children would compare the music of Freddie Mercury, Tchaikovsky, Schubert and Bach. It’s a fantastic idea, I said, but what would it look like? “You would start with listening,” he quickly responded.

Tetzlaff explained that music needs to be approached differently from other subjects, and he would argue that instead of starting by learning scales, notes, and harmony — which is of no interest to children in the beginning — we should begin by discussing why are we doing it, and what it means. Tetzlaff added that he would focus more on how music creates emotion.

“First you start with the emotional confrontation, then after a while that you can look into the how. If you go right to the core, that would make the subject of music more important than almost any other subject in school. It would allow young people to open up and acknowledge that they have difficult feelings, and that being together and talking about these things with other people is a social skill that will be very important for their whole life.

“It would show why music is important in the life of humans, and I think that’s not very difficult to do. Play Schubert songs for a class with the text in front of them, and you see how devastatingly beautiful this simple music can be. In popular music, you have to look for the five or six pieces that can really come close to that, but play those songs and mix them with others so that ears and hearts are open and we can avoid prejudice. Children who listen to Dvořák, Tchaikovsky and some very modern contemporary music can say ‘oh, this hits me right away.’”

On Saturday, October 31 at 10:00 am in Stull Recital Hall, Christian Tetzlaff will present a masterclass featuring Francesca Fetten (Shostakovich first concerto), Kah Yan Lee (Nielsen Concerto), Greg Gennaro (Franck Sonata), and Sophie Davis (Saint-Saëns Sonata No. 1). A second masterclass at 2:30 pm will focus on chamber music. Both events are free and open to the public.