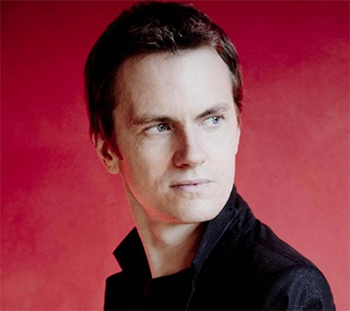 It’s a near-sacred tenet of the concert business that the show must go on. Happily for the Oberlin Artist Recital Series, French pianist Alexandre Tharaud made that happen when he stepped in on very short notice — and soon after an international flight — to replace Piotr Anderszewski in Finney Chapel on April 3. And with J.S. Bach’s daunting “Goldberg” Variations, no less.

Tharaud made learning that monumental work a mission when he decided to take it on a decade ago. He proclaimed a sabbatical and spent the better part of a year incorporating it into his mind, soul, and fingers to the point where — as he alluded in a post-concert Q&A — he wasn’t sure if he was playing the piece or it was playing him.

Performing from the score, Tharaud captivated a good-sized audience for over an hour, drawing them intimately into a relationship with Bach’s alternately brilliant and meditative music with a number of winning techniques.

His voicing of the expressive little Sarabande whose bass line is the subject of the vastly inventive variations that follow established his approach at the very beginning. Subtleties of touch and articulation, a wide palette of dynamics and colors, and the pianist’s skill at teasing out inner details of the music were all on display in the first three minutes of his recital.

Tharaud’s improvisatory decisions to take or omit repeats, his groupings of the thirty variations into meaningful episodes with breathing room in between, and his penetrating exploration of the elaborated solo lines of Bach’s slow movements — in which time seemed momentarily suspended — all added to the sense of mastery and conviction that Tharaud put across on Wednesday evening.

Add to that the transparency he achieved in complex textures, the ease with which he adapted some of the thornier variations that are native to a two-manual harpsichord but foreign to a single-keyboard piano, and the case of jet lag he must have been experiencing, and Alexandre Tharaud’s performance was all the more remarkable. By the time the Sarabande appeared again, it felt like homecoming after an eventful journey.

Tharaud responded to a thundering ovation (Oberlin students like to stamp their feet European-style) with a brilliant Scarlatti sonata that sounded just as fresh as the Variations themselves.

The pianist was, in fact, making a second appearance on the Artist Recital Series this season, having appeared with Franz Welser-Möst and The Cleveland Orchestra last September in Hans Abrahamsen’s concerto for left hand, Left Alone. On that occasion, Northeast Ohio greeted him with a wilting heat wave, so happily, the temperature in Finney Chapel was more agreeable this time.

In that post-concert Q&A moderated by piano professor Robert Shannon, Tharaud said that he was already mentally preparing for his next “Goldberg” performances, which would take place in identical programs the following two evenings in Fort Worth. We were lucky he had a one-day gap in his schedule so this show could go on in Oberlin. Not only was his recital memorable in itself, it added yet another chapter to the exciting chronicle of rescued performances.