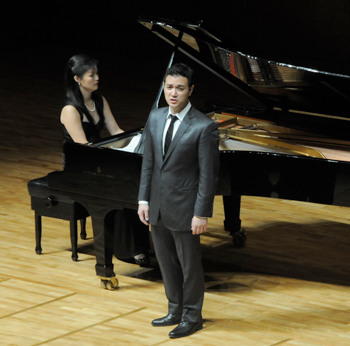 Two song cycle masterpieces formed the framework of the recital: Robert Schumann’s Dichterliebe, Op. 48 (1840) and Benjamin Britten’s Winter Words, Op. 52 (1954), a work Nicholas Phan has recorded and that has become one of his calling cards. Sets of songs by 20th-century Americans Ned Rorem and Jake Heggie filled out the program.

In his detailed program notes, Phan laid out the theme of the recital, an exploration of what it means to be an artist. Phan and Huang opened with Ned Rorem’s lyrically simple setting of William Butler Yeats’ “O Do Not Love Too Long,” set almost in the style of a folksong. Its warning to the listener that romance and love can change over time was the perfect introduction to Schumann’s settings of sixteen poems by Heinrich Heine.

The texts depict a young poet madly in love with a woman, only to have her spurn his affection to marry another man. In true Romantic spirit his emotions are heightened, both in joy and in sorrow. The breakup occurs in the seventh song (“I bear no grudge, even when my heart is breaking”). The rest of the cycle traces the poet’s downward slide into grief and depression, until at the end of the 16th song there are no more words. The piano is left to provide the final cadence after a lengthy unsung postlude. The duo gave a fluent performance with subtle phrasing, Phan singing with precise German diction. At a few points here and in the Britten songs, the tenor pushed his voice to the maximum.

Phan adjusted the order of the printed program after intermission, placing the Heggie and Rorem sets first, with the Britten cycle to close. Jake Heggie’s songs, which are well-crafted, conservatively modern, and tuneful, have become popular in recent years with many well-known singers. (I confess to finding them not in the same league as those of the other composers on this program.) This cycle, Friendly Persuasions, was written in 2008 as part of a celebration of Francis Poulenc’s songs at London’s Wigmore Hall.

The texts, by poet and librettist Gene Scheer, imagine encounters between Poulenc and four of his friends: baritone Pierre Bernac (the first performer of many Poulenc songs), harpsichordist Wanda Landowska (for whom Poulenc wrote a concerto), Raymonde Linoissier (a woman for whom Poulenc professed having a romantic interest, despite his homosexuality), and the World War II poet Paul Éluard (whose poetry Poulenc set as an act of resistance during the war). The texts are humorous and conversational, imagining Poulenc’s quirky personality. The songs might be described as novelties to charm and entertain. Phan and Huang made them as convincing as they can be.

Ned Rorem has set many poems by Walt Whitman. The four brief songs on this program deal with the poet as a person, with youth and old age, whether his public persona really reflects his true self, and with the physical aspects of his love for other men. Rorem’s songs are simultaneously simple and complex. The word-setting is direct (kudos to Phan for his excellent English diction), yet the musical structures and the accompaniments behind the scenes are varied. These four songs were a highlight of this concert.

Benjamin Britten wrote Winter Words to texts by Thomas Hardy for his professional and life partner, Peter Pears. Composer and tenor performed them frequently, often pairing them with Schumann’s Dichterliebe, so combining the two cycles on this program was a natural. Although Pears’ and Phan’s voices are quite different, both share a sensitivity to text, tuning, and phrasing.

The eight songs of Winter Words describe scenes from life, from the banal (a creaking old table in “The Little Old Table”) to the fantastic (a heavenly throng singing and playing around a choirmaster’s grave in “The Choirmaster’s Burial (Or The Tenor Man’s Story).” Britten was a master of creating atmosphere with the simplest of musical means. In a song about a convict in custody meeting a boy with a violin on the train station, Britten evokes the tuning of the violin with a series of open fifths in the piano. In the final song, eternity is depicted by the slow pace of repeated chords building to the climactic question “how long,” until earth is restored to primeval balance. Nicholas Phan and Myra Huang have clearly made these songs their own. Theirs was a fluent performance, nearly perfect in interpretation and musicality — a fitting capstone to a fine concert.

As an encore the artists offered the appreciative audience one of Britten’s many folksong arrangements, “The Plough Boy” — timely in its humorous political references.