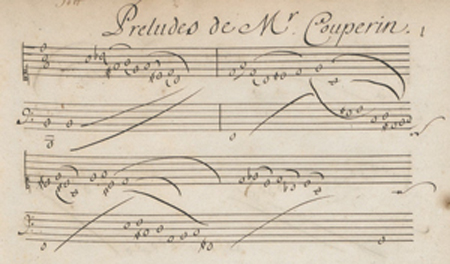 Rhythm is right up there with harmony as a pillar of Baroque music. So it’s curious that French composers like Louis Couperin, Élisabeth Jacquet de la Guerre and Jean-Henri D’Anglebert invented the concept of “unmeasured preludes” and notated them as shown here.

The calligraphy is beautiful on the page, but how do you rhythmicize those notes at the keyboard? Mitzi Meyerson devoted much of Thursday morning’s harpsichord master class to that topic, beginning as always with student performances.

The secret in Louis Couperin’s d-minor Prelude, she said, is to seek out the harmony — determining the essential chord progressions by playing them in basso continuo style. Then you can add the other notes and structure the music to express whatever emotion you’re feeling at the moment of performance (“My dog died,” or “My lover left me” — with happier emotions possible in major keys).

Meyerson ended the class by drawing a second harpsichord up to the first, cheek to cheek, and queuing students up in double lines to play a communally improvised piece. Each player took up from where the previous one left off. Fun! 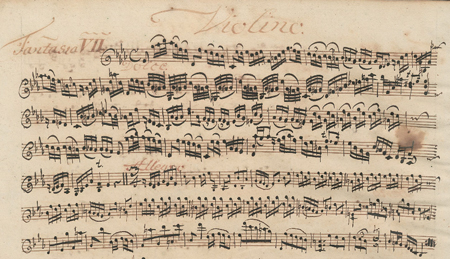 This year being the 275th anniversary of Georg Philipp Telemann’s death, BPI marked the occasion with a 2:00 pm concert of the composers’ unaccompanied fantasies. Fifteen students played tag-team performances of solo works for viol, violin, viola, flute, harpsichord, oboe, and voice flute (a recorder pitched between the normal alto and tenor instruments). That mini-marathon recital was perhaps a logistical warm-up for Saturday’s student recital, a performance by 22 different ensembles who have been coached every afternoon this week at 3 pm.

Three of those ensembles, like mine, featured organ continuo, which complicated rehearsing. Not that Oberlin has any dearth of organs, but its continuo instrument was stuck on the third floor of Bibbins, the main Conservatory building, designated a hard-hat zone due to the second major construction project in two years. Organ curator David Casimir donned a helmet and liberated the instrument (similar to the one below) just in time for Thursday’s coaching session. 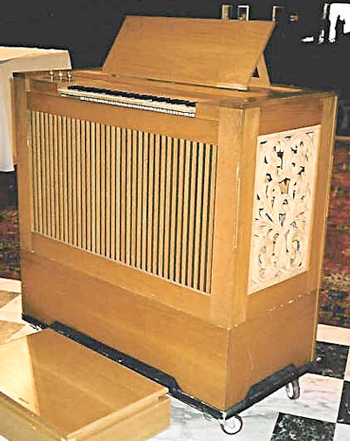 Then we squeezed Peter Maddigan the oboist, Luka Stefanović the cellist, Bob Brooks and Florence Peacock the singers, Lucas Harris the coach, me and the continuo organ into a practice room already occupied by a larger organ, a clavichord and a stack of dollies. Arias by Graupner and Telemann continued to get polished under the sensitive ear of coach Harris, with a little intermission to find something for the organist to stand on. Situated on a dolly and lacking the platform in the photo, the instrument is too tall to play comfortably — you have to stand on tiptoe to get your hands in a good position. That search went on into Friday!

Franz Schmidt’s Symphony No. 4 showcased the ensemble, under guest conductor Jonathan Berman, in the standard conventions of a not-so-standard piece. But at the start of the program, the musicians were equal partners to pianist Cédric Tiberghien, whose playing could be as bold as the full orchestra or as intimate as any instrumental solo. END_OF_DOCUMENT_TOKEN_TO_BE_REPLACED

END_OF_DOCUMENT_TOKEN_TO_BE_REPLACED

Jackson began the program with a recitation of Langston Hughes’ poem “Helen Keller” — the first of five poems by Hughes that served as interludes between each piece on the first half. END_OF_DOCUMENT_TOKEN_TO_BE_REPLACED

Pianos with pins and tape on strings, a bass drum and tam tam, crotales, Almglocken, and vibes. Microphones were hooked up all around the instruments. The feed was sent to speakers around the room. Lighting designer Nicholas Houfek hung incandescent globes over the arrangement of instruments from thin black wires stretching across the beams. END_OF_DOCUMENT_TOKEN_TO_BE_REPLACED

From the podium, Elim Chan set an ambitious tone for the evening. The rising star conductor, here in her Cleveland Orchestra debut, has a commanding style, and every twist and turn in Saturday’s performance tracked closely with her baton. END_OF_DOCUMENT_TOKEN_TO_BE_REPLACED