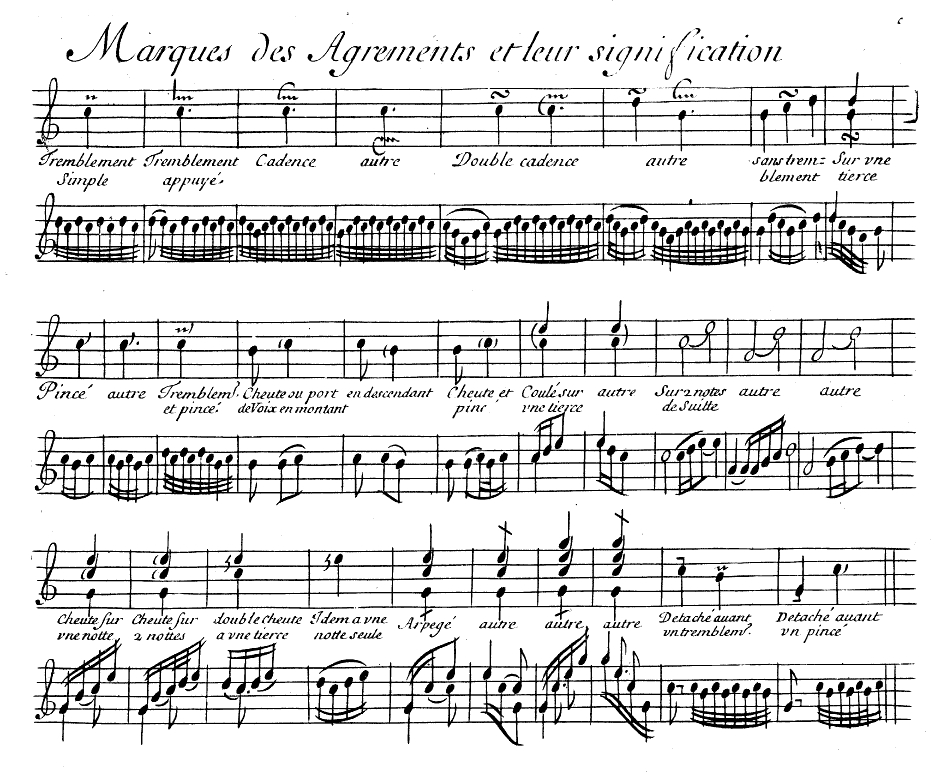 Broadening the topic to editions of works, she said that the beautiful, digitally engraved score I and most of the class had downloaded from IMSLP — everyone’s favorite online source for free music — presented problems. D’Anglebert’s arrangement challenges the player with a minefield of agrements or ornaments while the original orchestral score calls for almost none, and our copies didn’t convey them accurately. (See D’Anglebert’s table above for his how-to guide, and a snippet from the misleading edition below for some idea of what the performer is up against.)

Discussion of articulation — especially in the all-important Baroque bass lines — also accompanied performances of movements from a Bach keyboard suite, and movements from another D’Anglebert piece.

You’d think — especially if you’re a pianist — that harpsichordists and organists have no control over the beginning of a note or chord. You press a key and a string gets plucked or a valve gets opened no matter what finger force is used, and that’s that. Not so, said Crawford, and not so, said Joe Gascho later in ensemble coaching and the evening continuo class. Slow attacks, fast attacks, and everything in between are possible, and releases should be controlled the same way.

In variations on that subject, Crawford said that every note on the harpsichord had a beginning, a middle and an end, and talked about working with the “bloom” of a harpsichord note using what she called her mushroom analogy (put those fungi in a pan on the fire with some butter and wine, and eventually they’ll absorb the liquid, only to release it a bit later — cooks will understand and take the point). 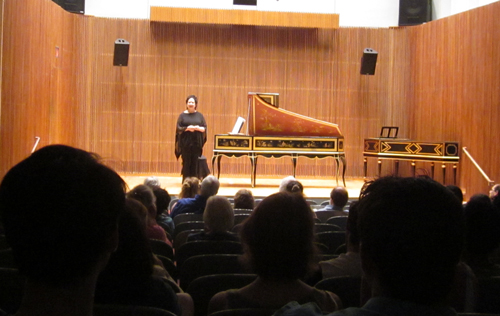 Wednesday’s mid-afternoon faculty recital in Kulas Recital Hall featured Mitzi Meyerson and Lisa Crawford’s gorgeous Craig Tomlinson harpsichord in suites by D’Anglebert and Antoine and Jean-Baptiste-Antoine Forqueray. Meyerson’s breathtaking, visceral performances communicated the essence of some of the most striking French Baroque music to the audience — a master class of its own without words.

On Wednesday evening, I looked in on the second rehearsal of the student Baroque Orchestra, when Joe Gascho was drilling the ensemble,which takes all comers from recorders to theorbos in addition to the usual strings and winds — and a trio of harpsichordists. Wednesday was all about tuning, and the conductor took the texture of the music apart in several different ways and at varying tempos to make chords click. Harmony, harmony, harmony, as Meyerson said earlier. 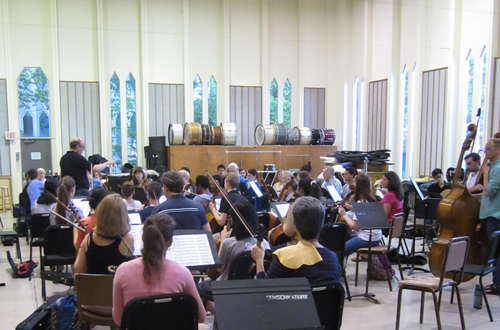 A refreshing reminder of both the unique powers and deeper kinships of music and poetry, the performance of Collage on October 14 filled the Auditorium of Pilgrim Church with sounds both tranquil and mighty. In an era when rhyming rhythmic recitation over instrumental sound hardly constitutes a new idea — hip-hop, after all, is the ascendant popular genre of the present century — Okantah and the Cavani have engineered something unique, brilliant, and vital. END_OF_DOCUMENT_TOKEN_TO_BE_REPLACED

Although the Museum had just opened again earlier in the week, in-person concerts were not on the agenda. Instead, Classical Piano Series director Emanuela Friscioni and her husband Antonio Pompa-Baldi invited a virtual audience into their handsome, sun-dappled music room for an intimate, exquisitely-played program of four-hand piano works by Schubert and Debussy topped off with the premiere of a new work by their fellow Italian, Luca Moscardi. END_OF_DOCUMENT_TOKEN_TO_BE_REPLACED

END_OF_DOCUMENT_TOKEN_TO_BE_REPLACED

Northeast Ohio’s Les Délices has long been that rarest of beasts: a world-class organization so proud of its region (ours) and repertoire (distinct niches in pre-1800 music) that it never tries to be everything to everyone, paradoxically making a strong case for a broad, curious international following. In the December episode of its SalonEra series, the ensemble embraces its strengths and community to marvelous effect. END_OF_DOCUMENT_TOKEN_TO_BE_REPLACED