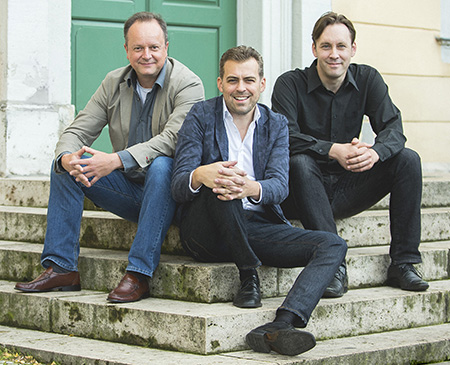 Only nine years younger than its East Side counterpart, the Rocky River Chamber Music Society will continue its 61st season with a concert by Germany’s Phaeton Piano Trio on Monday, February 10 at 7:30 pm. The performance at West Shore Unitarian Universalist Church is free, but donations are welcome.

While violinist Friedemann Eichorn, cellist Peter Hörr, and pianist Florian Uhlig have been performing together and with colleagues in various combinations for 20 years, the Phaeton Trio is a relatively recent development. “Some years ago we had the idea to found a trio, and we’ve been playing intensely together for the last three or four years,” Eichorn said in a phone conversation from New York.

The violinist has taken advantage of the Trio’s brief February tour to rent an apartment and bring his whole family to New York for three months. “It’s the first sabbatical of my life,” he said. “I’ve loved New York ever since I studied at Juilliard, and we’ve spent December and January together visiting the great museums, the Empire State Building, the financial district, all the different neighborhoods, Brooklyn, Coney Island, and Harlem. I would love to live here if I could pay the rent!”

Now that the musicians are about to launch their debut tour of the U.S., with concerts at the Library of Congress, the Frick Collection, and the San José Chamber Music Society, as well as Rocky River, Eichorn’s wife and their three children, ages 18, 14, and 10, will be doing some independent exploring in New York.

Not that the family doesn’t have worthy sights of their own to visit in Germany. “We live in Weimar, a beautiful city, and one that was not destroyed in the war. It’s in Thuringia, which is known as ‘the County of the Castles,’ and the Liszt and Goethe houses are there,” Eichorn said. “Unfortunately, the Bach house didn’t survive. He lived in Weimar for ten years, and his famous sons — Wilhelm Friedemann, Carl Philipp Emanuel, and Johann Christian — were all born during that period.” 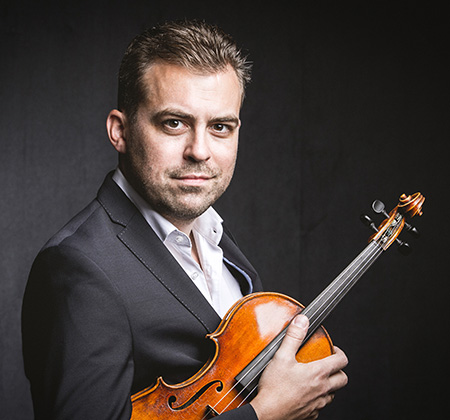 How did the musicians come to adopt Phaeton as the name of their group? “Greek mythology is always interesting,” Eichorn said. “It doesn’t have anything to do with fashion, but concerns itself with things that last for thousands of years. We think the same of the great compositions in our world of classical music.”

“We think that a Beethoven Trio like the ‘Ghost’ represents a high point in human creativity,” Eichorn said, “and the Mendelssohn Trios and Dvořák’s ‘Dumky’ are big hits both for us and the audience.” Watch a video made by the University of Music “Franz Liszt” in Weimar, with highlights from both works, plus selections from a Haydn trio:

Although the Phaeton Trio regard middle European Romantic music as the focus of their repertoire, they’re equally devoted to 20th century works. “Just recently we did a wonderful program for Bavarian Radio. They told us to play anything we liked and not to worry about ticket sales. It’s like a dream when an organizer says that.”

The group ended up programming Alfred Schnittke’s Trio (the composer’s own transcription of the 1985 String Trio), Wolfgang Rihm’s Fremde Szenen (Strange Scenes), and Shostakovich’s Second Trio. “It was really hard stuff, but the audience loved it,” Eichorn said, adding that the trick is to get people to buy tickets. “Once you get them in the hall, they’re fascinated by the music.”

Friedemann Eichorn is looking forward to his first visit to Cleveland. “I’ve never been there before, I only know its great orchestra.” He and his colleagues already have subsequent tours planned, including Ottawa in July, and forthcoming appearances in April of 2021 and March of 2022. Happily, it’s not all work for the Trio. “We’re colleagues, but also great friends. We always say that the third half of the concert is when we go to a restaurant together afterward.”

Northeast Ohio’s Les Délices has long been that rarest of beasts: a world-class organization so proud of its region (ours) and repertoire (distinct niches in pre-1800 music) that it never tries to be everything to everyone, paradoxically making a strong case for a broad, curious international following. In the December episode of its SalonEra series, the ensemble embraces its strengths and community to marvelous effect. END_OF_DOCUMENT_TOKEN_TO_BE_REPLACED

END_OF_DOCUMENT_TOKEN_TO_BE_REPLACED

Another I remember fondly is Gian Carlo Menotti’s Amahl and the Night Visitors.  Commissioned by NBC, the one act, made-for-television opera, premiered on December 24, 1951, at the network’s studios in New York’s Rockefeller Center. And now, through the wonders of technology, Cleveland Opera Theater has created a magical new production of the work which is available on demand through January 6, 2021 (Three Kings Day). END_OF_DOCUMENT_TOKEN_TO_BE_REPLACED

Jessen has now followed up with her second solo CD, Winter Chapel. Recorded on January 17, 2020 in Oberlin College’s Fairchild Chapel and available on Carrier Records, the album is a continuum in Jessen’s journey to push the musical boundaries of her instrument and herself as an improviser. END_OF_DOCUMENT_TOKEN_TO_BE_REPLACED