Charnofsky himself manned the piano throughout the concert, joined by violinists Diana Pepelea-Vardi and Jennifer Walvoord, violist Esther Nahm, and cellist Derek Snyder. With no audience present, and with the camera alternating through several angles, the quintet took the opportunity to arrange themselves in the round, allowing for the unique experience of seeing them clearly lock eyes as they navigated the music. That added immediacy, countering an acoustic that shaved off the vividness from the sound of the strings.

The Beach Quintet brings waves of potent expression which can sometimes feel unrelenting, but which climb higher than you expect at certain moments, taking you aback with awe. Again and again, this group found the juice to meet those moments, summoning ever richer, more robust sounds — always beautiful, never strained. Sadly, one climax in the third movement that promised to deliver in just that way was lost when the stream froze for several seconds. 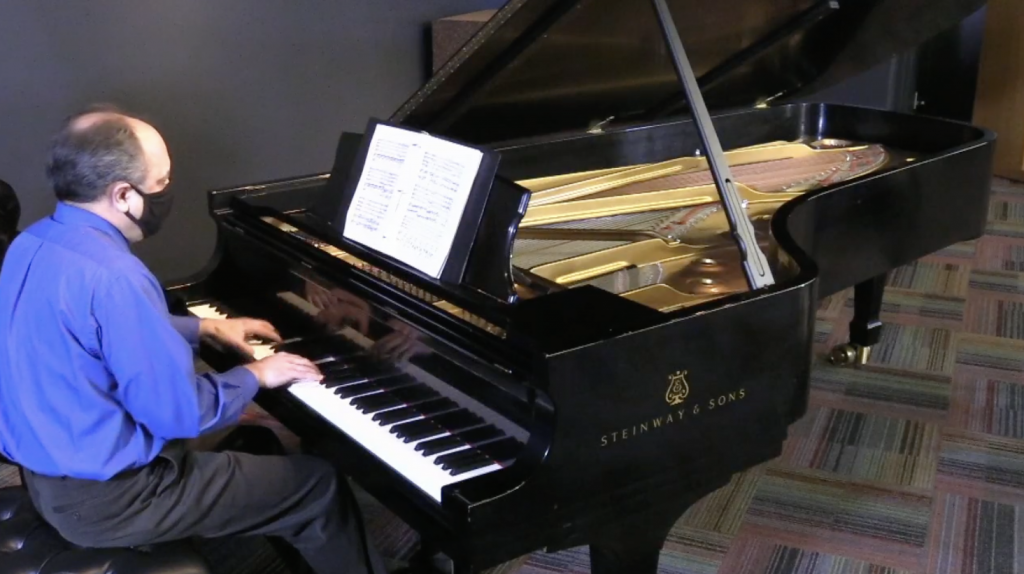 Each movement of 5 by 5 features a different player and builds around a different interval, from thirds to sevenths. All are attractively written, but especially after the intensity of the Beach, the most compelling movements were the more understated ones, like the gorgeous “Meditation,” which strikes a unique balance between peace and subtle tension. Hushed playing from the strings, gentle piano commentary, and a wonderful extended solo from Nahm added up to an absorbing performance.

There’s something very human about the Shostakovich Quintet, which consistently works itself up with tension, then stops just short of sharing what’s really on its mind. That self-censorship can test your patience, but it also makes the briefly personal moments all the more satisfying — like in the Intermezzo, which lets its guard down a little to allow for tender melodies from the first violin, here played beautifully by Pepelea-Vardi. And after so much restraint, the finale’s lingering optimism makes it truly feel like an arrival.

From those gray tones of subtlety — sometimes searing gray, if that’s possible — to those occasional vivid colors of expression, the ensemble skillfully captured this fascinating piece to finish off a strong program.

END_OF_DOCUMENT_TOKEN_TO_BE_REPLACED

Rodgers & Hammerstein’s Cinderella was originally produced for television in 1957 — seven years after the animated Disney film was released — and starred Julie Andrews. According to the Rodgers & Hammerstein website, it was viewed by over 100 million people. END_OF_DOCUMENT_TOKEN_TO_BE_REPLACED

The story line has its origin in an 1855 play and an 1842 farce that Thornton Wilder mined for his 1938 play The Merchant of Yonkers. When that turned out to be a flop, in 1954 Wilder made the crucial decision to re-center the show around the character of the legendary marriage broker Dolly Gallagher Levi and renamed it The Matchmaker. END_OF_DOCUMENT_TOKEN_TO_BE_REPLACED

The Dodero Center for the Performing Arts at the Gilmore Academy in Gates Mills is one feature of an impressive campus. The auditorium is shallow, the stage is deep, and the ensemble played without a shell. Throughout the program, the sound, especially in instruments’ lower registers, tended to disappear. END_OF_DOCUMENT_TOKEN_TO_BE_REPLACED