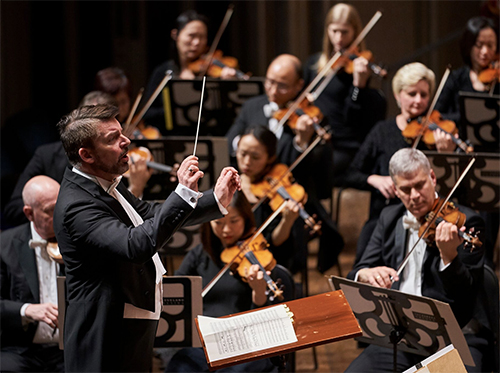 Though he has lamentably gone on to that great podium in the sky, the spirit of Pierre Boulez hovered over Thursday evening’s all-Ravel concert by the Cleveland Orchestra in Severance Hall. Conductor Matthias Pintscher drew exacting, intelligent, glorious performances from the Orchestra and Chorus. And pianist Jean-Yves Thibaudet triumphed in one of Ravel’s most demanding pieces — with one hand tied behind his back.

Well, Thibaudet’s right hand actually just rested in his lap while his left hand covered the whole range of the keyboard in an astonishing display of manual wizardry during Ravel’s Concerto for the Left Hand. Commissioned by Paul Witgenstein, a German pianist whose right arm was amputated due to a World War I injury, the work would be challenging enough if both hands were involved. Thibaudet covered all the notes with admirable sang froid, and especially dazzled in the work’s two huge cadenzas.

That first cadenza, announced in a flourish of parallel chords, followed a short, spooky introduction, its rumbling tremor seemingly proceeding from the underworld thanks to an impressively played solo by contrabassoonist Jonathan Sherwin. The second, more lyrical, came at the end only a dozen bars before the abrupt, cheeky coda.

In between, while maintaining a certain sobriety of color, Ravel’s music dips into Jazz, and suddenly veers off into a brutal scherzo-march which must reflect both the composer’s and the commissioner’s wartime memories. And from time to time, the composer cleverly manipulates the texture of the piano part to create the impression that two hands are at work.

Pintscher presided over an incisive performance, well-controlled but with room to breathe. The audience rewarded Thibaudet with several enthusiastic curtain calls, and he responded in turn with an affectingly pure, two-handed performance of Ravel’s Pavane pour une enfante defunte. 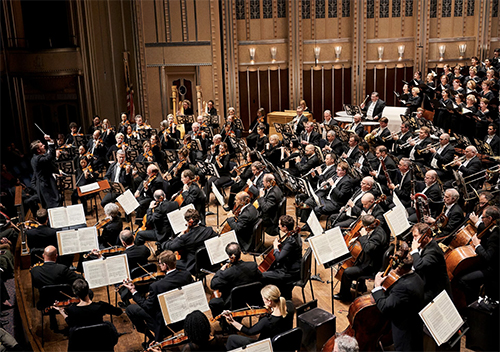 The evening began with the suite from Mother Goose, Ravel’s orchestration of five French fairy tales originally written as a piano duet for the children of friends. Pintscher fussed a bit too much over the opening “Pavane of the Sleeping Beauty,” but later he let these charming movements speak for themselves. Jonathan Sherwin had yet another contrabassoon moment in the spotlight as you-know-who in the “Conversations between Beauty and the Beast,” and the mallets of the percussion section created a wonderful din in “The Fairy Garden.”

But the sonic spectacular of the evening was the complete Ballet music for Daphnes and Chloé, subtitled “Chorographic Symphony in Three Parts.” A concatenation of ancient Greek myths with a happy ending, the piece inspired Ravel to invent his own musical visions of classical antiquity, including primitive dances that preceded Stravinsky’s Rite of Spring by a year. 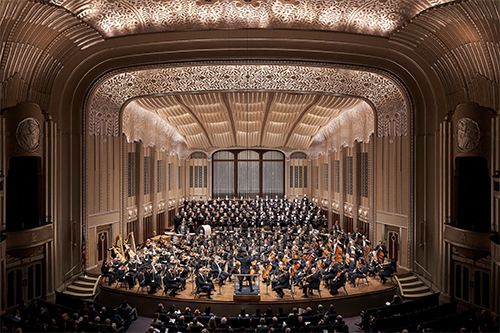 For once, the Cleveland Orchestra Chorus didn’t have to worry about its diction, for Ravel calls for a wordless chorus that varies its color by opening and closing lips. From the murmuring opening pastoral scene, through the glorious crescendo of “Daybreak,”  to the wild vocal outbursts of the 5/4 wedding dance, the COC added vivid hues and excitement to the story.

Pintscher steered and controlled the performance with a light but expert hand, almost becoming a dancer himself in its more kinetic moments. Many soloists (including Mark Damoulakis, who cranked a wind machine) were called out during the bows, but flutist Joshua Smith was unforgettable in his role as Pan. But then didn’t “unforgettable” really describe the whole evening?

Jackson began the program with a recitation of Langston Hughes’ poem “Helen Keller” — the first of five poems by Hughes that served as interludes between each piece on the first half. END_OF_DOCUMENT_TOKEN_TO_BE_REPLACED

Pianos with pins and tape on strings, a bass drum and tam tam, crotales, Almglocken, and vibes. Microphones were hooked up all around the instruments. The feed was sent to speakers around the room. Lighting designer Nicholas Houfek hung incandescent globes over the arrangement of instruments from thin black wires stretching across the beams. END_OF_DOCUMENT_TOKEN_TO_BE_REPLACED

From the podium, Elim Chan set an ambitious tone for the evening. The rising star conductor, here in her Cleveland Orchestra debut, has a commanding style, and every twist and turn in Saturday’s performance tracked closely with her baton. END_OF_DOCUMENT_TOKEN_TO_BE_REPLACED