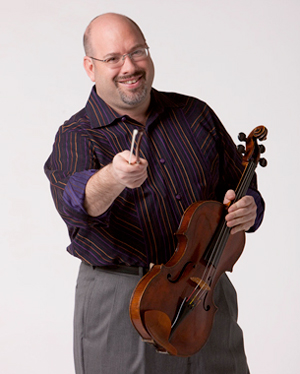 Even before the Labor Day weekend, many of Northeast Ohio’s universities, colleges and conservatories were already up and running. Because students have only just moved in, concerts at the beginning of the term usually feature faculty recitals and performances by visiting ensembles, and there are several of them scheduled for the early days of September.

The first faculty event at the Oberlin Conservatory this fall will feature violist Michael Strauss (left) and his colleagues Alexa Still, flute, and pianists Monique Duphil and James Howsmon in Dmitri Shostakovich’s Viola Sonata, op. 147, Maurice Duruflé’s 1928 Prélude, Récitatif, et Variations for Flute, Viola, and Piano, Op. 3, and Paul Hindemith’s Viola Sonata, op. 11, no. 4, in a free concert in Kulas Recital Hall at the Oberlin Conservatory on Saturday, September 7 at 8.

“The staff discussed who would perform the first recital of the semester”, Strauss told us by phone. “I said, yeah, I can do that. I’m sure that many of the faculty would have been fine with the slot, it’s just that no one had made the move.”

Now in his second year as associate professor of viola and chamber music, Strauss admits that opening with Shostakovich’s last work is a little risky. “It’s quite a dark piece and it is a big test in keeping your wits about you. I started looking at music that would fit and I thought of going heavy and then lightening up.”

The Duruflé suits that profile and is a rarity — the organist-composer’s only chamber work. “I’ve always wanted to do it”, Strauss said, “and Monique was so into playing it that even though she is on sabbatical, she delayed her travel plans in order to perform the piece and to have the opportunity to work with Alexa. It makes a nice and interesting mood changer between the Shostakovich and Hindemith’s very first sonata. He turned his back on the piece after he wrote it. Both Shostakovich and Hindemith left this music as soon as they wrote it but they did it in different ways. It’s a juxtaposition that I thought was cool.”

Strauss describes both pieces as “war horses” and says that he has some students who are to the point that they should be working on repertoire like this. And that is one of the purposes of faculty recitals. “Students need to learn how to attend recitals like anyone else. And they need to know how to filter and process information, so I don’t really think of them as students — I think of them more as audience members who have a little more in the way of expectations. I do play recitals regularly for master classes and there is just a little extra zing in the room when performing for students, which I think is fun. But audiences are basically the same in that they want you to do well. They want to hear something great, and you want to deliver.”

Oberlin is in the second year of its “Listen Live” service that allows the public to watch and listen to selected performances streamed over the Internet. “You can listen though the Live Steaming option” Strauss says, “but I think it will be a very interesting recital to hear in the room. It will very different than listening on-line because there will be a lot of energy in the room.”

Here are some other interesting events scheduled by academic institutions during the first week of September.

Cleveland’s new music ensemble, No Exit, will play compositions by Lorain County Community College composers Robert Beckstrom, Gerald Evans, Jeffrey Mumford and Xenia Beckstrom as part of its LCCC residency on Friday, September 6 at 7:30 pm. The free concert in the Studio Theatre is the opening event in this season’s Signature Series.

Also on September 6 at 8 pm, Cleveland Institute of Music faculty members Annie Fullard, violin, Peter Salaff, violin, Jeffrey Irvine, viola, Mark Kosower, cello, and Shuai Wang, piano, will join students and guest artists in Brahms’s Clarinet Quintet in b, Op. 115 and the Trio for Horn, Violin and Piano in E-flat, Op. 40 & Hartke’s The Rose of the Winds for String Octet. The concert takes place in Mixon Hall at CIM and is free, but seating passes are required (call the box office at 216.795.3211).

Not the first Baldwin Wallace event of the season, but one of the most entertaining, will also take place on Friday, September 6 at 8 in Gamble Auditorium as five young composers race the clock in the Iron Composer Contest, modeled on the “Iron Chefs” challenge. Earlier that day, Can Bilir (Ankara, Turkey), Jennifer Jolley (Cincinnati, OH), Jakub Polaczyk (Lexington, KY), Christoffer Schunk (Newhall, CA), and David Wolfson, (New York City) will be given an orchestration, a “secret ingredient” and five hours to deliver a completed composition. The results will be heard in the evening concert, to be hosted by WCLV’s Mark Satola and broadcast live over 104.9 FM and WCLV.com.

One student group already has a program under their fingers at this point in the season. Having played music by Beethoven, Barber, Francaix and Prokofiev (an arrangement of Peter and the Wolf) at the Holden Arboretum in August, CIM’s Juniper Wind Quintet (Kimberly Zaleski, flute, Michael Resanovic, oboe, Drew Sullivan, clarinet, Kevin Winter, French horn, Arleigh Savage, bassoon) will repeat that repertoire on the free Music at Main series on the third floor landing of the main Cleveland Public Library on Saturday, September 7 at 2 pm.

Debra Comodeca and William Shaffer will prove that four hands can play more notes than two at Baldwin Wallace on Sunday, September 8 at 6 when they play duo-piano music by Khachaturian, Milhaud and others in Gamble Auditorium. And Dana School of Music faculty hornist Stacie Mickens will give a solo recital on Monday, September 9 at 8 in Bliss Recital Hall at Youngstown State University.

The cimbalom was the feature of the show, an instrument capable of taking on many personas. Its performer, Chester Englander, has shaped his career around the instrument, and has inspired composers to write more repertoire for it, some of which was presented on the program. END_OF_DOCUMENT_TOKEN_TO_BE_REPLACED

You wouldn’t expect that acoustic from a glance at the nave, which is wide and long, but not especially lofty. But when I guest conducted a local amateur choir and professional orchestra in Beethoven’s Mass in C there a few years back, during the first rehearsal we released the final chord of the “Gloria” and listened in astonishment for the next several seconds. The sound continued to roll down the space like the big wave that surfers dream about. END_OF_DOCUMENT_TOKEN_TO_BE_REPLACED