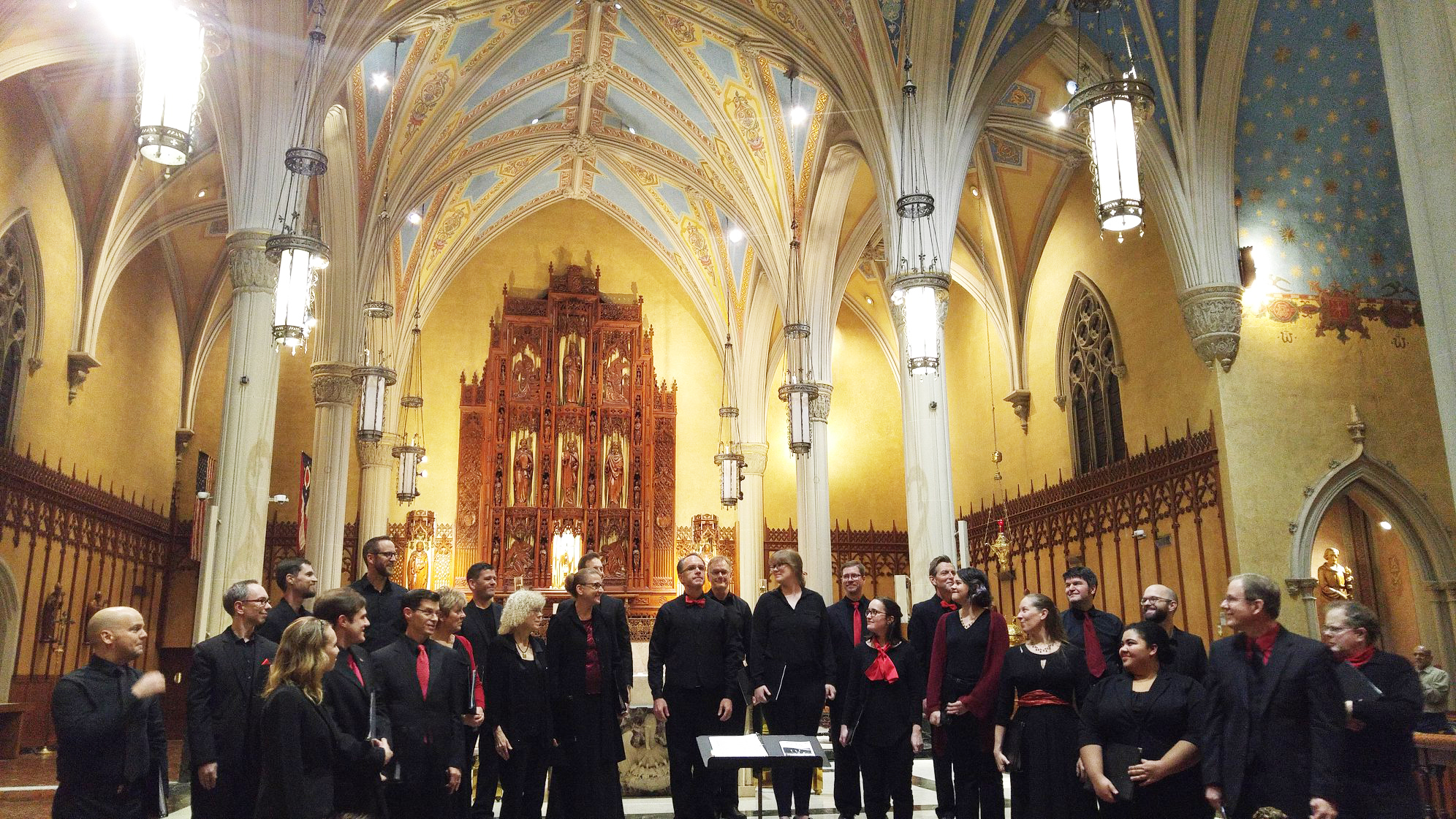 Quire Cleveland began its eleventh season on November 2 with new artistic leadership. Under the direction of Jay White, the professional chorus marked the dual celebrations of All Saints Day and All Souls Day with a cleverly devised, masterfully sung program at the Cathedral of St. John the Evangelist in downtown Cleveland.

Those pieces populated the “In Memory Of” section of the concert, to be followed by “Crossing Over,” comprising later works by British composers Charles H. H. Parry and Sir William Henry Harris that celebrate — in ecstatic Anglican fashion — the glories that lie beyond this life.

Jay White, who serves as Professor of Voice at Kent State University, comes to his new position with Quire Cleveland with the experience of three and a half decades as a professional singer, including eight seasons touring with Chanticleer. It’s not by coincidence that Quire’s program on Friday evening was both cleverly put together and moved along physically like a well-oiled machine.

White grew the chorus as the music became more complex, beginning with chamber-sized groups of singers and culminating in Harris’ double-choir motets that involved all 24 performers. Transitions were smooth as singers entered and exited the performing area and adopted different configurations. 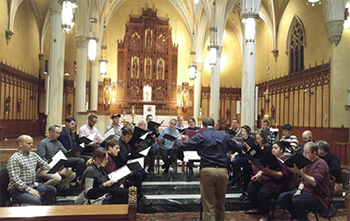 Since most of the vocalists were holdovers from the Ross Duffin – Beverly Simmons era, musical values — tuning, blend, and ensemble — remained historically high. The hyper-live acoustic of St. John’s Cathedral favored the more fully scored liturgical pieces in this program, while some of the elegies designed for chamber performance, like the double-texted Andrieu motet, got hopelessly garbled. Happily, full texts and translations were provided in the program.

The more modern works that closed the program were among the high points of the evening. The rich textures and harmonies that Parry and Harris applied to wonderful texts by Spenser, Donne, and Vaughan have raised many goosebumps at Evensong in Anglican cathedrals, and so they did ecumenically at St. John’s on Friday. After cataloguing the glories of cherubim, seraphim, angels, and archangels, at the end of his Hymn to Heavenly Beauty, Edmund Spenser asks,

How then can mortall tongue hope to express
The image of such endlesse perfectnesse?

A thoughtful addition to the program was Venetian Renaissance composer Salamone Rossi’s Kaddish, sung in memory of the victims of the Tree of Life Synagogue shooting in Pittsburgh the week before.

END_OF_DOCUMENT_TOKEN_TO_BE_REPLACED

Rodgers & Hammerstein’s Cinderella was originally produced for television in 1957 — seven years after the animated Disney film was released — and starred Julie Andrews. According to the Rodgers & Hammerstein website, it was viewed by over 100 million people. END_OF_DOCUMENT_TOKEN_TO_BE_REPLACED

The story line has its origin in an 1855 play and an 1842 farce that Thornton Wilder mined for his 1938 play The Merchant of Yonkers. When that turned out to be a flop, in 1954 Wilder made the crucial decision to re-center the show around the character of the legendary marriage broker Dolly Gallagher Levi and renamed it The Matchmaker. END_OF_DOCUMENT_TOKEN_TO_BE_REPLACED

The Dodero Center for the Performing Arts at the Gilmore Academy in Gates Mills is one feature of an impressive campus. The auditorium is shallow, the stage is deep, and the ensemble played without a shell. Throughout the program, the sound, especially in instruments’ lower registers, tended to disappear. END_OF_DOCUMENT_TOKEN_TO_BE_REPLACED