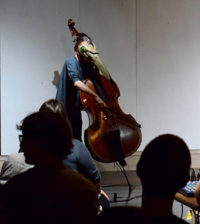 The Magalen in Slavic Village was full of the musically adventurous for the strangely fantastic second installment of the Re:Sound New Music Festival on Friday, June 8.

Local harpist Stephan Haluska opened the evening with improvised explorations of his instrument’s extended possibilities. He created a mystical atmosphere by activating the strings with a standing fan. After ditching the fan and bringing in electronics to continue this droning soundscape, Haluska expanded the universe by plucking the high strings  and rubbing the harp’s body, creating dolphin-like squeaks.

In the next section, he scraped the lowest string, generating squalling noises. The final few minutes swooped into vertiginous murks of ecstatic plucking and glissandi. Haluska ended this fascinating whirlwind by letting the reverberations die away.

Bowling Green-based saxophonist Nick Zoulek’s compositions featured continuous, emotion-filled textures produced by circular breathing, vocal effects, and amplification. He began his set with selections from his album Rushing Past Willow, accompanied by glorious videos featuring the Wildspace Dance Company. For Silhouette of a Bent Tree, Zoulek sang-screamed on his bass saxophone, creating consonant multiphonics over an almost tonal ground bass. In Symmetry in Memories, he established a celebratory mélange with his alto sax in repeated fast arpeggios. His final untitled piece is part of his newest project, Enter Branch. This time his growling bass sax was a funk lion, going back and forth between astounding, blood-curdling noises and gentle, long notes.

Detroit-based Ben Willis gave an unforgettable rendition of his theatrical subatlantic songs (2015-18). With his amplified double bass, a headset, and a Hieronymus Bosch-like, long-beaked bird hat, he began his ritual by kneeling on the floor in silence. Then he rose to rub the tip of his bow across the body of his bass, bow in circles and diagonally, mimic extreme virtuosity while only making scratching noises, and sing very softly and unintelligibly atop a long drone to create major chords. Midstream, one consonant chord collided with an obvious tonal progression that ended on an inconclusive and dissolving dominant chord. This unpredictable and contemplative experience ended with Willis swaying back and forth in silence. 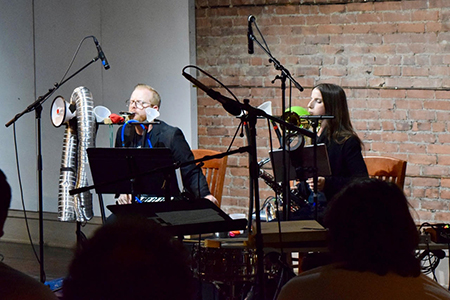 The noisily virtuosic New York-based duo Popebama capped the evening with joyful hyperactivity. Tenor saxophonist Erin Rogers and percussionist Dennis Sullivan opened with Rogers’s Wormhole (2017). With its gigantic set up, this raucous piece was a funhouse, focusing on air-activated sounds including — but not limited to — bellows foot pedals, a melodica, a vuvuzela, and a coffee can. Remote Cipher (2018) grouped collectively improvised sounds into a less indeterminate musical plan. Played in near darkness, this horror soundtrack featured Sullivan on an amplified block of wood, creepy mouth noises, and a foray into Rogers’s bag of unearthly sax techniques. Sullivan’s manic Shedding Waste (2016) places inexpensive household objects side-by-side with the extended saxophone to find overlapping timbres. The speedy, ever more intrusive spoken phrases gave this crunchy music a zazz of lightness and humor.