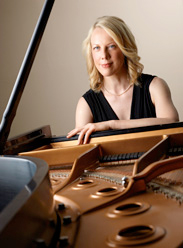 Youngstown State University piano professor Caroline Oltmanns launched the new season of Music From The Western Reserve’s distinguished concert series at Christ Episcopal Church in Hudson on Sunday afternoon with an engaging hour of music by Schubert, Beethoven, James Wilding and Chopin. Oltmann’s easy confidence as a performer and her skill as a commentator drew the nice-sized audience in as though listeners and performer were gathered together in an intimate living room.

The centerpiece of the afternoon was Beethoven’s “Waldstein” Sonata, op. 53, which Oltmanns prefaced with the intelligence that the sonata’s earlier nickname was L’Aurore (Dawn) and with the caveat that this would, at 25 minutes, be the most demanding listening assignment of the afternoon. She dispatched the work with a refreshing straightforwardness and relaxed tempos which allowed the music to breathe in places where other pianists press nervously ahead. The final prestos gained extra character from that approach.

Oltmanns began her program with Schubert’s e-flat Impromptu, an agreeable burst of lyricism with nicely-voiced chords. A set of Chopin pieces — the Nocturne in c, op. 48, Etude in A-flat, op. 25 no. 1, “Harp” and the Scherzo in c-sharp, op. 39 — revealed the pianist’s gentle virtuosity and sure touch.

The pianist’s banter with the audience included a “don’t be afraid” prologue to James Wilding’s Stalking Bit by Bit (2001) and Take Nine (2011), which followed the Beethoven. No one needed to be wary: Wilding’s comical cat and mouse epic was modern but no more frightening than a Tom & Jerry cartoon, while Take Nine rang changes on an accessible nine-beat-to-the-bar pattern that was only mildly dissonant and quite listenable. Oltmanns coyly revealed afterwards that Wilding was her husband. He would have received the same warm applause in any case.

You could see the relationship at work on a practical level. Repertoire for two players at the same piano requires a certain choreography. There’s just one of each pedal to share, and the hand crossings left and right — which can be so fun to watch a soloist pull off — get more complicated when another person’s involved. At times, Pompa-Baldi drew a hand away from the keyboard and into his body, making room for Friscioni, and at the close of a few delicate phrases, the two were crouched together over the same final notes at one end of the instrument. END_OF_DOCUMENT_TOKEN_TO_BE_REPLACED

The signature sounds of these famous film scores are not so much John Williams’ invention as allusions to other classical pieces. The foreboding half-step from Jaws, growing more and more furious in the cellos and basses, shares something with Dvořák’s “New World” Symphony and Bartok’s Miraculous Mandarin. END_OF_DOCUMENT_TOKEN_TO_BE_REPLACED

Unlike most concert pianists, who seem to have taken to the keyboard while they were still learning to walk, Kharitonov only began his studies at the age of 16. But he plays with such naturalness and easy virtuosity that you’d never imagine he came late to the party. END_OF_DOCUMENT_TOKEN_TO_BE_REPLACED

Each concert in “Beethoven and Beyond” includes two of LvB’s string quartets with a contemporary work in between, usually by way of contrast, although in her introductory remarks, primo violinist Annie Fullard drew thematic connections between the pizzicati in Beethoven’s “Harp” Quartet and Jessie Montgomery’s Strum. END_OF_DOCUMENT_TOKEN_TO_BE_REPLACED