Another major work will be featured the following week when soprano Golda Schultz, tenor Maximilian Schmidt, and baritone Thomas Hampson join Welser-Möst, The Cleveland Orchestra, and the Cleveland Orchestra Chorus in Haydn’s The Seasons. Performances are scheduled for Thursday, January 18 at 7:30 and Saturday, January 20 at 8:00 pm. In between, Welser-Möst and the Orchestra will play all-Beethoven on Friday, January 19 at 8:00 pm — Symphonies 1 and 3 and the Overture to The Creatures of Prometheus. 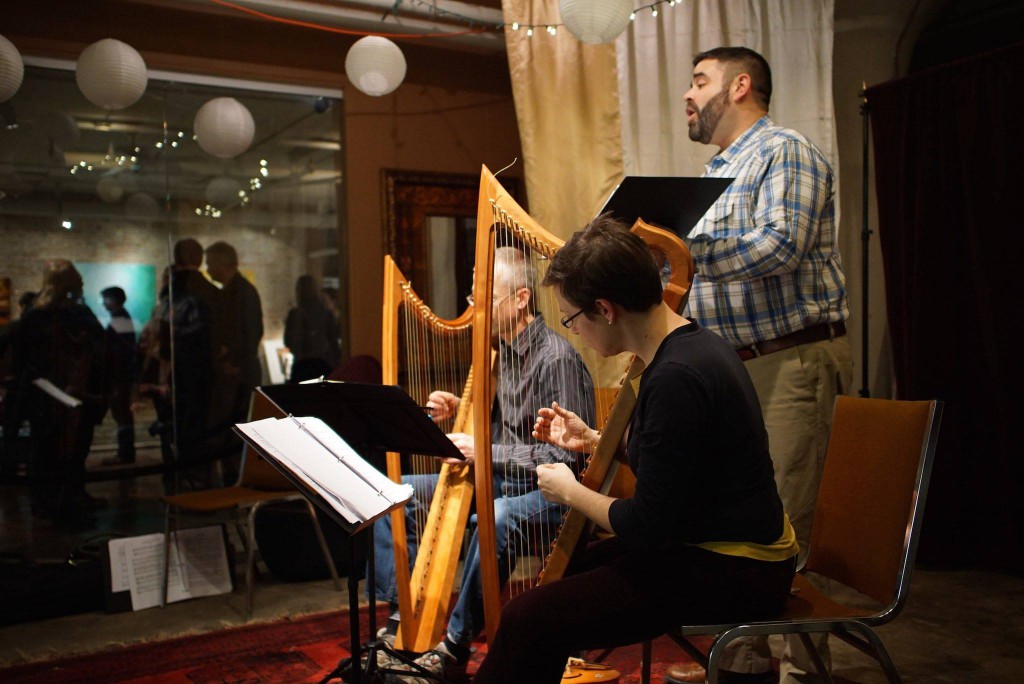 Cleveland’s French Baroque ensemble Les Délices will visit an earlier era the weekend of January 13 and 14 for “Intoxicating,” a program of medieval music by Machaut, Solage and others featuring Elena Mullins, soprano, Jason McStoots, tenor, Charlie Weaver, lute, Scott Metcalfe, harp and vielle, and director Debra Nagy.  in music by Machaut, Solage and others. There are performances on Saturday evening, January 13 at 8:00 pm at Lakewood Congregational Church, and on Sunday afternoon, January 14 at 4:00 pm at Herr Chapel at Plymouth Church in Shaker Heights. The ensemble is also sponsoring a Medieval Dance Party — a 45-minute performance for children and their grownups — on Saturday, January 13 at 3:00 pm at Bop Stop.

Cleveland’s No Exit New Music welcomes its Twin Cities colleagues of Zeitgeist for a joint concert of intimate new solo and trio works at Heights Arts on Saturday, January 13 at 8:00 pm. The free concert will feature works by Morton Feldman, Andrew Rindfleisch, William Anderson, and a No Exit improvisation. The two ensembles come together for a second event on Sunday, January 14 at Noon at Spaces gallery.

A rare performance on the Cleveland Museum of Art’s Holtkamp organ will feature Davide Mariano in a free recital of works by Bach, Mozart, Schumann, Widor, and Guilmant on Sunday afternoon, January 14 at 2:00 pm.

Three events will honor the memory of Dr. Martin Luther King, Jr. on his birthday weekend. Victor Liva will lead the Cleveland Philharmonic in a free concert on Sunday, January 14 at 3:00 pm in Tri-C’s Metro Auditorium (but tickets are required: call 216.987.4805).

Franz Welser-Möst will preside over the annual MLK Celebration Concert in Severance Hall on Sunday, January 14 at 7:00 pm, a program featuring Ryan Speedo Green, bass-baritone, James Pickens Jr., actor & the Martin Luther King Jr. Celebration Chorus, William Henry Caldwell, director. Free tickets are available through the Severance Hall Box Office (if any are left by the time you read this — but the event will be broadcast live over WCLV, 104.9 FM & WCPN, 90.3 FM).

There are tough chamber music choices to be made on Sunday, January 21. Clarinetist Franklin Cohen and pianist Zsolt Bognár have rescheduled their concert on the Arts Renaissance Tremont series for 3:00 pm, that day, putting them head-to-head with the next Heights Arts “Close Encounters” performance at the Bop Stop featuring English hornist Robert Walters, bassoonist Drew Pattison, and pianist Edward “Teddy” Niedermaier in “Rhythms, Rhymes, and the Kitchen Sink,” and in close proximity to a 4:00 pm CIM faculty recital when tenor Corey Shotwell and pianist Gerardo Tessonnière will present Schubert’s Winterreise and the premiere of Evan Fein’s Letzte Brief, a setting of Schubert’s last letter.

And to round out the month, Cleveland Opera Theater will turn its attention to new opera scenes by Marti Griebling-Haigh, Lorenzo Salvagni, and Ryan Charles Ramer, and the Cleveland premiere of Dawn Sonntag’s Verlorene Heimat (“Lost Homeland”) the weekend of January 27 and 28. Performances take place at the Maltz Performing Arts Center.

Consult our calendar listings for details and ticket information.