Banks carried four different saxophones with him to the audience-less West Shore Unitarian Universalist Church, along with two classic pieces he had transcribed and three powerful new works — one of them his own. He explained at the start that the new pieces would be receiving “workshop performances” as he prepares them for his Young Concert Artists (YCA) debut recital at New York’s Merkin Hall on March 10, when he will again be joined by Bjerken.

First up was Carlos Simon’s hear them, a commission from YCA and Washington Performing Arts that proved to be a fascinating combination of old and new. Its gorgeous melodies are steeped in tradition, but the little tinges of microtones and the whispery, sliding glissandos in the highest register bring things into a different dimension.

The piece also introduced some of the key attractions of Banks’ playing: his deeply felt lyricism, his warmly glimmering tone, his expert shaping of a dramatic arc, and his remarkable level of control. The latter skill made those high glissandos sound eerily human, like someone crying out for help. Perhaps what added to the beautiful vulnerability of the sound is that it came from such a low instrument: the baritone saxophone.

Two-minute intermissions were to take place between pieces, perhaps to switch instruments, but this first break lingered on longer until the feed cut out. After several minutes, it rebooted, and Banks and Bjerken were ready to go with music by Mozart, whose Oboe Quartet in F, K. 370 was a good fit for its new instrumentation, the soprano saxophone bringing a similar intensity of sound to the oboe, and the piano nicely tying together the accompanimental string parts. 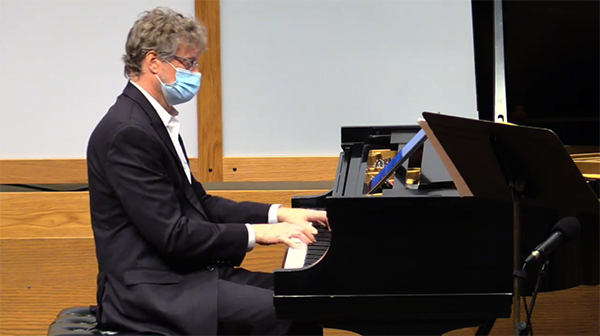 Elegance and engaging musicality were a constant from both players. There was never a dull moment, but the highlight-within-the-highlight was a gentle high note inside a cadenza from Banks. Two tiny blips in technique, and a couple of notes that arrived just barely late proved that he’s human.

Back to the technology, that restart brought one positive change that continued for the rest of the evening: the video had been stretched wide before, and now filled out the screen naturally. But unfortunately, the feed cut out again a few minutes into the piece, returning shortly afterwards, mid-performance in the first movement. Moving forward, any gripes of this sort were more minor: while the sound of the instruments was pristine, a slightly grainy noise in the background tagged along, and on a few occasions you could hear little clicks in the audio.

Too bad the concert doesn’t seem to be available any longer — the performance of Schumann’s famous Fantasiestücke, Op. 73 would sit side-by-side with any great recording of that piece.

Taking up the alto saxophone, Banks consistently found the most beautiful sounds to breathe life into melodies that are often taken for granted. Memorable moments included his gentle expressivity in the opening, and his shift into total warmth for the triplets in the second movement. The only complaints: a few high notes that drifted sharp. As for Bjerken, he not only shaped his own melodies with engaging conviction, but was an attentive partner, making smooth and rapid adjustments of time and timbre.

Banks pointed out before YCA Composer-in-Residence Saad Haddad’s A Sonata For When Time Stands Still that it “might be the piece on the program that pushes your ears furthest.” Faced away from us, he began by playing quiet multiphonics on his soprano sax. Eventually, he turned toward the camera while playing a slow, leaping melody that mixed in quarter-tones and more multiphonics — a wonderful combination of grinding dissonance and just slightly off-kilter consonance. Later, the extended techniques met a mournful tune, giving off a sense of expressivity corrupted.

Only a few aspects of this thoroughly original work suggested that it still needs any tinkering. One was a transition based around clusters in the piano, which felt less fresh than the other material. Another was the sense that a few sections could be trimmed down.

Banks picked up his final remaining saxophone, the tenor, to finish his program with a piece of his own — in what would be basically its “first time through,” he said. He also provided some background about the piece, written in tribute to his family: “It’s essentially a setting of four spirituals and gospel songs” that were picked out by them individually. Its title, Come As You Are, was also a theme for the program: in troubled times, he said, music can be a refuge “for anyone and everyone to take what they need from it.”

The piece, which was given a passionate performance by both players, offers a unique and ambitious blend of feelings and sounds: a deep intimacy, a Romantic-style flourish, the dramatic flair of gospel music, and a sense of vulnerability that comes through in the history of the spirituals. The result in this hearing was not always greater than the sum of its parts, and perhaps there were a few too many peaks to the larger arc. Still, it’s an inventive piece that provides a view into another side of Banks’ musicianship, making it a powerful conclusion to this recital, and surely to Banks’ YCA debut next month.

END_OF_DOCUMENT_TOKEN_TO_BE_REPLACED

Supported by engagingly, yet simple staging by Cara Consilvio, a well-prepared cast of singers told the archetypal story of Cinderella with charm and flair. Framing the production was  a sparse but colorful set and wonderful lighting by Dave Brooks. END_OF_DOCUMENT_TOKEN_TO_BE_REPLACED