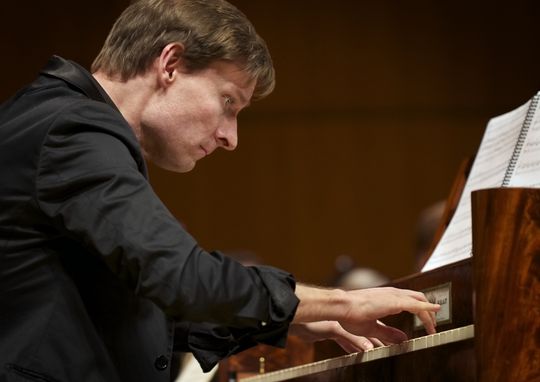 Any concert that features a first-rate ensemble, with a respected and rising conductor at the helm and a renowned soloist as a guest, will make for a great evening’s worth of music-making. However, some events seem to invite the audience to levitate in their seats, absorbed and enchanted. Jonathan Cohen drew extraordinary sounds from The Cleveland Orchestra in one such concert last week. When pianist Kristian Bezuidenhout joined in, the assembled musicians achieved something like transcendence.

This concert on Friday, August 24 served as the finale of the Orchestra’s Summers@Severance series, and had an informal feel from the start. Sporting striped socks and trading a podium for a harpsichord, Cohen walked out to a compact orchestra, around a third of its full personnel. However, the opening phrase of Handel’s Overture to the Occasional Oratorio signaled that this dressed-down, pared-down group would still cut an imposing figure. This fanfare, a sweep of brassy brightness embroidered into velvety violins, led into a grandiose introduction, followed by a sunny fast section.

Michael Sachs, leading his section on piccolo trumpet, assayed his part with fearless intensity even when high lines presented clear challenges. Principal oboe Frank Rosenwein played with a lovely, refined sound throughout an extended slow solo, while also minimizing his vibrato in the custom of Handel’s day. The biggest period performance surprise came in the final march, however, when the strings played with the rhythmic lilt known as notes inégales. Standard in the 18th century but virtually unheard of in modern orchestral playing, it gave this final section a swagger worthy of, well, an occasion.

The Orchestra’s nine-foot Steinway presented a fun visual contrast with the tiny harpsichord, but Bezuidenhout found ways to make this thoroughly modern instrument sound perfect for Haydn’s Piano Concerto No. 11. In particular, his strong, brief stabs of bass recalled the tendencies of pre-1800 pianos. However, there was nothing dusty about his brisk, driving tempos, which set occasional hesitations in sharp relief. The ensemble of horns, oboes, and strings, led by Assistant Concertmaster Jessica Lee, sounded powerful throughout — never small.

More magic happened in the minuet, when dance rhythms swirled with athletic energy and moments of harmonic complication felt like islands of suspended time. Bezuidenhout’s cadenza flowed from the resonance of his previous phrase. In the rondo finale, piano and strings alike flung out accented notes with attitude. Applause died down before Bezuidenhout could reemerge for an encore, at once a shame and a relief; this unforgettable, transcendent performance would have been hard to follow.

Mozart’s Symphony No. 25 opens in a mood of dark drama, and the four horns stole the show with high howls and ominous hums. The bassoons took the spotlight in the following andante, with a buttery duo texture that filled the space above the lute-like plucking of Cohen’s muted harpsichord. The minuet and trio danced along in preparation for the gale-force finale, in which the conductor’s keyboard lent a sharp edge to the strings’ cross-cutting rhythms. The triumphal ending felt well-earned.