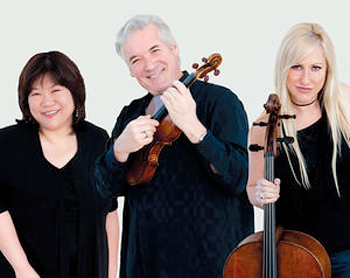 “I think many people have heard Pinchas Zukerman in a concerto setting, but to hear him in a chamber music setting is an incredible way of experiencing the artistry and magic that he brings to everything that he plays,” Zukerman Trio pianist and Oberlin Conservatory faculty member Angela Cheng said during a recent telephone conversation.

“And Amanda Forsyth is an incredible cellist, so I’m grateful to have the opportunity to work with two wonderful artists. To be able to play this concert at home is something I will remember for a long time.”

On Friday, September 30 at 8:00 pm in Finney Chapel, the Oberlin Artist Recital Series will present The Zukerman Trio. The program will include selections from Reinhold Glière’s Eight Pieces For Violin And Cello, Op. 39, Dmitri Shostakovich’s Trio No. 2 in e, Op. 67, and Franz Schubert’s Trio in B-flat, D. 898. END_OF_DOCUMENT_TOKEN_TO_BE_REPLACED

Sorrell promises that the program will live up to its name with dazzling performances including Vivaldi’s concerto for four violins, Bach’s fourth Brandenburg Concerto and a novelty for local audiences, a concerto by J.D. Heinichen. END_OF_DOCUMENT_TOKEN_TO_BE_REPLACED

END_OF_DOCUMENT_TOKEN_TO_BE_REPLACED

The strings-only work by Berg has made relatively frequent appearances on the Orchestra’s programs. In 2021, the musicians recorded it for the In Focus series, and it appeared again on last year’s European tour. Friday’s rendition maintained the group’s characteristic light and effortless playing, each section blending as much as possible to echo the work’s original form as a string quartet. At fifteen minutes total, the piece is quite short, but the dense encoded musical meanings require some extra-attentive listening. Splitting up the three movements ensured that each one could be appreciated on its own. END_OF_DOCUMENT_TOKEN_TO_BE_REPLACED