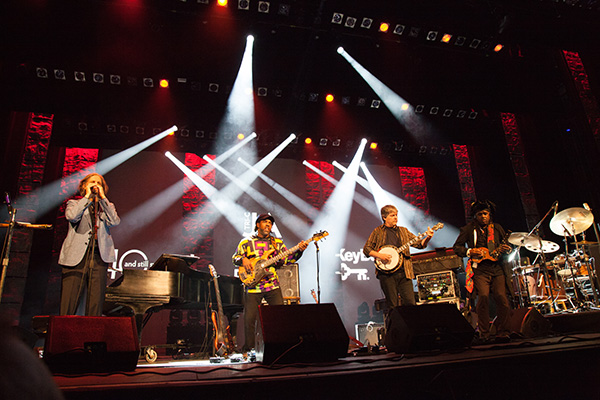 With bassist Victor Wooten and percussionist and “drumitarist” Roy “Future Man” Wooten, they form the “extraordinary initial lineup” of Béla Fleck & The Flecktones. The quartet closed the night on June 28 at the KeyBank State Theatre, a Tri-C JazzFest double-feature that opened with John Scofield’s Combo 66. It was an evening of legends, only getting better with age.  END_OF_DOCUMENT_TOKEN_TO_BE_REPLACED

Everything about the March 19 Canton Symphony MasterWorks program, billed as “Scenic Moments,” was thoughtfully designed to take us on an exhilarating journey, starting with Mikhail Glinka’s brilliant Overture to Russlan and Ludmilla. Just as the music tells of Russlan’s enchanted adventure to win the hand of Ludmilla in marriage, so too music director Gerhardt Zimmermann was clearly on a mission to claim our unqualified affections for his ensemble’s thrilling versatility. And that he did. END_OF_DOCUMENT_TOKEN_TO_BE_REPLACED

There was more than one surprise in the March 22 program by the Canton Symphony Orchestra at Umstattd Hall, billed as “A Béla, A Bartók, And A Surprise.” For starters, I’m fairly sure this was the first time the audience could see CSO musicians towering larger than life, captured live on camera and projected on to a screen behind the orchestra.

It’s certainly an effective tool for highlighting various sections or soloists at work, but only if the camera shots are properly coordinated with the music. On this occasion there were some shortcomings in that regard, not unlike seeing footage of football players sitting on the sidelines while a big scoring play transpires on the field. That said, I’m sure that this new element will be successfully adjusted to become a great enhancement of the concert experience.

END_OF_DOCUMENT_TOKEN_TO_BE_REPLACED

Béla Fleck has long been known for his experiments in bringing the voice of the banjo into jazz, rock and other genres of music. The impetus for connecting these five outstanding musicians came directly from Fleck’s initial foray into classical composition (it was in the stars apparently, since his parents named him Béla Anton Leoš— after Bartók, Webern and Janáček, respectively). After premiering his banjo concerto, The Imposter, with the Nashville Symphony in September of 2011 (he also played it last season with The Cleveland Orchestra), Fleck had the opportunity to record the work for Deutsche Grammophon, but needed something else to fill out the album. END_OF_DOCUMENT_TOKEN_TO_BE_REPLACED

Prior to the performance of Imposter, Concerto for Banjo and Symphony Orchestra with The Cleveland Orchestra in December of last year, the 15-time Grammy Award-winning banjoist Béla Fleck told us about one of his recent classical compositions. “I’ve already finished my second commission, a 25-minute piece for banjo and string quartet,” Fleck said via e-mail. “The quartet is Brooklyn Rider and they are fantastic!

Fans of Béla Fleck already know that from the beginning of his musical career Fleck was experimenting with ways to incorporate the banjo into all styles of music such as bebop and jazz. As a member of Sam Bush’s progressive bluegrass band, New Grass Revival, his blending of rock and country music with bluegrass caught the attention of audiences and critics. END_OF_DOCUMENT_TOKEN_TO_BE_REPLACED

Orchestra’s KeyBank Fridays@7 concert series began in 2009 as a way to create a new concert experience for new patrons and introduce current patrons to musics of the world. As part of this season’s series, Giancarlo Guerrero led the Cleveland Orchestra in an exhilarating exhibition of American music for a nearly sold-out Severance Hall on Friday, December 7.

Fridays@7 is really three concert experiences in one. The 6:00 pm pre-concert in the Reinberger Chamber Hall featured folk music from Eastern Europe performed by Harmonia. The main event highlighted American music with Short Ride in a Fast Machine by Adams, An American in Paris by Gershwin, and Béla Fleck’s Concerto for Banjo and Orchestra. The Bogomolny-Kozerefski Grand Foyer housed the after-party, which showcased contemporary music from New Orleans performed by Mark Mullins, trombone; Roland Guerin, bass; and Johnny Vidacovich, drums. END_OF_DOCUMENT_TOKEN_TO_BE_REPLACED

touted American in Paris, the publicity focused on Bela Fleck and his new Banjo Concerto, but the centerpiece of Thursday evening’s Cleveland Orchestra concert at Severance Hall led by guest conductor Giancarlo Guerrero was Aaron Copland’s wonderful ballet suite from Billy and the Kid, first played by Rodzinsky and the orchestra at subscription concerts in 1943 but thereafter mostly relegated to educational concerts and summertime at Blossom.

Somehow, the Brooklyn-born Copland — paralleling the background of New York-born cowboy Wiliam Bonney, the subject for Lincoln Kirstein’s 1938 ballet — managed to evoke the wide open spaces and the joys and sorrows of the Wild West in music that is unmistakeably and iconically “American”. The suite is a terrific piece of orchestral choreography full of stories, scenes, moods, colors and rhythms that creates its own brilliant scenario without a dancer in sight. END_OF_DOCUMENT_TOKEN_TO_BE_REPLACED

END_OF_DOCUMENT_TOKEN_TO_BE_REPLACED

We begin with the world premiere recording of Okeanos, Bernd Richard Deutsch’s concerto for organ and orchestra, featuring Paul Jacobs as soloist. The title refers not only to the Titan of Greek mythology, but also “to an idea of immense (and sometimes unfathomable) greatness and breadth, which conjures up in my mind the thought of the organ,” as Deutsch writes in his notes. END_OF_DOCUMENT_TOKEN_TO_BE_REPLACED

If you haven’t already warmed up to French Baroque clavecin music, Chicago-based keyboardist Jory Vinikour’s L’Unique: Harpsichord Music of François Couperin should make a strong impression on your musical tastes. The most prominent member of a musical dynasty second only to the German Bachs, François Couperin left a large treasure trove of keyboard works, 234 in all, arranged in 24 suites or Ordres.  END_OF_DOCUMENT_TOKEN_TO_BE_REPLACED

After weeks of watching online streams of archived concerts and ad hoc performances from quarantined musicians’ living rooms and bedrooms, it was thrilling to be able to advertise, preview, and report on two real-time webcasts last Friday and Saturday that embraced high production values and addressed the persistent issue of how to compensate musicians for online services. Saturday afternoon’s joint recital by Colin Davin and Jason Vieaux was sponsored by the Cleveland International Classical Guitar Festival, whose 2020 iteration, scheduled for that weekend at the Cleveland Institute of Music, vanished in the wake of the pandemic. END_OF_DOCUMENT_TOKEN_TO_BE_REPLACED