Bad weather was no deterrent for concertgoers at the Blossom Music Center on Saturday, August 13. The audience in a nearly-packed pavilion and on an umbrella-laden lawn gave The Silk Road Ensemble two standing ovations, one at intermission and one at the conclusion of their stellar performance. END_OF_DOCUMENT_TOKEN_TO_BE_REPLACED 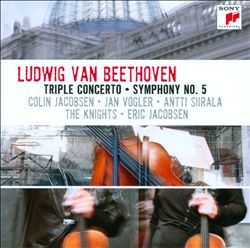 That congenial spirit fits the highly collaborative Triple Concerto well. Knights violinist Colin Jacobsen, cellist Jan Vogler, and pianist Antti Siirala share the limelight as soloists, relishing the musical back-and-forth (Jacobsen is also a member of Brooklyn Rider with Knights conductor Eric Jacobsen). The cello often leads, which is good news when it’s played by Vogler. He has one of the more astonishing tones of any cellist: impossibly expressive, whether potent or dulcet. This is in contrast to Jacobsen, whose sound is pared down and razor-like, especially in the upper range. Siirala’s clear, smooth touch infuses each note with effervescence. END_OF_DOCUMENT_TOKEN_TO_BE_REPLACED

Béla Fleck has long been known for his experiments in bringing the voice of the banjo into jazz, rock and other genres of music. The impetus for connecting these five outstanding musicians came directly from Fleck’s initial foray into classical composition (it was in the stars apparently, since his parents named him Béla Anton Leoš— after Bartók, Webern and Janáček, respectively). After premiering his banjo concerto, The Imposter, with the Nashville Symphony in September of 2011 (he also played it last season with The Cleveland Orchestra), Fleck had the opportunity to record the work for Deutsche Grammophon, but needed something else to fill out the album. END_OF_DOCUMENT_TOKEN_TO_BE_REPLACED