Bad weather was no deterrent for concertgoers at the Blossom Music Center on Saturday, August 13. The audience in a nearly-packed pavilion and on an umbrella-laden lawn gave The Silk Road Ensemble two standing ovations, one at intermission and one at the conclusion of their stellar performance. END_OF_DOCUMENT_TOKEN_TO_BE_REPLACED

“As usual the summer season is a mix of musical genres and artists,” Cleveland Orchestra artistic administrator Ilya Gidalevich said during a recent telephone conversation. END_OF_DOCUMENT_TOKEN_TO_BE_REPLACED 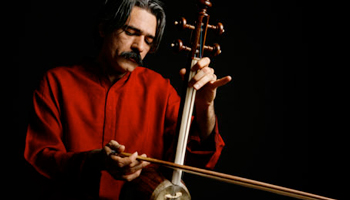 “I think that being back in Cleveland is a very beautiful déjà vu. I have been there many times with various projects and it’s so nice to return and play for the audience in the same place again,” kamancheh player Kayhan Kalhor told us by telephone from the west coast. “As a touring musician it’s always very nice when you develop that relationship with a venue. It builds a trust that they want to hear your new projects and I’m glad that I have this relationship with the Museum.”

On Wednesday, November 20 Persian spiked fiddle virtuoso and three-time Grammy nominee Kayhan Kalhor returns to the Cleveland Museum of Art’s Gartner Auditorium for a concert beginning at 7:30 pm. Kalhor will be joined by Ali Bahrami Fard, santoor. The performance is part of the Museum’s Masters of the Fiddle series.

Kalhor, a member of Yo-Yo Ma’s Silk Road Project, is known around the globe for his performances of traditional Persian music as well as for his multiple collaborations. In addition to Silk Road, Kalhor has appeared as soloist with various ensembles and orchestras including the New York Philharmonic, the Orchestre National de Lyon and the string quartet Brooklyn Rider, and was recently featured on the soundtrack of Francis Ford Copolla’s Youth without Youth in a score on which he collaborated with Osvaldo Golijov.

Kahlor says that his CMA program is the result of an experimental project that began after meeting instrument maker Peter Biffin in Germany. END_OF_DOCUMENT_TOKEN_TO_BE_REPLACED

END_OF_DOCUMENT_TOKEN_TO_BE_REPLACED

Rodgers & Hammerstein’s Cinderella was originally produced for television in 1957 — seven years after the animated Disney film was released — and starred Julie Andrews. According to the Rodgers & Hammerstein website, it was viewed by over 100 million people. END_OF_DOCUMENT_TOKEN_TO_BE_REPLACED

The story line has its origin in an 1855 play and an 1842 farce that Thornton Wilder mined for his 1938 play The Merchant of Yonkers. When that turned out to be a flop, in 1954 Wilder made the crucial decision to re-center the show around the character of the legendary marriage broker Dolly Gallagher Levi and renamed it The Matchmaker. END_OF_DOCUMENT_TOKEN_TO_BE_REPLACED

The Dodero Center for the Performing Arts at the Gilmore Academy in Gates Mills is one feature of an impressive campus. The auditorium is shallow, the stage is deep, and the ensemble played without a shell. Throughout the program, the sound, especially in instruments’ lower registers, tended to disappear. END_OF_DOCUMENT_TOKEN_TO_BE_REPLACED