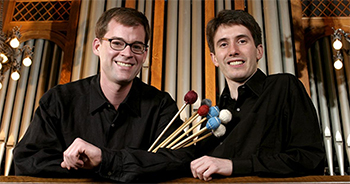 The idea of forming an organ/percussion duo arose in 2003 after British organist Clive Driskill-Smith gave an “Organ Plus” concert at London’s Westminster Abbey, pairing organ with various solo instrumentalists including percussionist Colin Currie.

“Clive said he’d love to do that kind of program again,” his now duo partner Joseph Gramley recalled in a telephone conversation. “We happened to have the same concert management, so Clive went on the Phillip Truckenbrod website, saw my name, and cold-called me. He was living in Oxford at the time so we got together in Hartford during his next visit. We hit it off and decided to tour together.”

Driskill-Smith and Gramley will bring their Organized Rhythm duo to Holy Trinity Lutheran Church in Akron on Sunday, April 7 at 4:00 pm for a free concert of works by Aaron Copland and Gustav Holst they have arranged themselves, as well as original and commissioned pieces by Paul Creston, Jacob Rogers, and William Susman. END_OF_DOCUMENT_TOKEN_TO_BE_REPLACED

Bad weather was no deterrent for concertgoers at the Blossom Music Center on Saturday, August 13. The audience in a nearly-packed pavilion and on an umbrella-laden lawn gave The Silk Road Ensemble two standing ovations, one at intermission and one at the conclusion of their stellar performance. END_OF_DOCUMENT_TOKEN_TO_BE_REPLACED