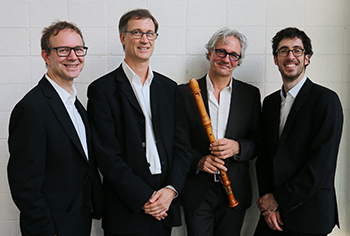 Is there any feat of performance greater than transfixing and moving an audience while remaining warm, welcoming, humble, and human? In a concert last week in Oberlin College and Conservatory’s Fairchild Chapel, the Flanders Recorder Quartet — performing in Northeast Ohio for the final time, as part of their 30th anniversary and farewell tour — offered a perfect blend of profundity, virtuosity, and tasteful tomfoolery as a parting gift to area audiences.

END_OF_DOCUMENT_TOKEN_TO_BE_REPLACED

The Oberlin Conservatory will present a four-concert Historical Performance WinterFest this month, including performances by the Flanders Recorder Quartet, lutenist Nigel North, the Oberlin Baroque Ensemble, and faculty harpsichordist Mark Edwards. Baroque flute professor Michael Lynn, who has organized the events, said, “They should all be excellent concerts, and the price can’t be beat — free!” The festival includes two public master classes as well as the performances.

HP WinterFest begins on Tuesday, February 20 with an 8:00 pm performance by the Flanders Recorder Quartet in Fairchild Chapel, a stop on the ensemble’s 30th Anniversary Farewell Tour. Founded in Belgium in 1987 and comprising Bart Spanhove, Paul Van Loey, Tom Beets, and Joris Van Goethem, the Quartet began touring following their success at the 1990 Musica Antiqua Competition in Bruges. After a career that has included more than 1,800 concerts in 42 countries, the ensemble has decided to disband at the end of 2018. END_OF_DOCUMENT_TOKEN_TO_BE_REPLACED

END_OF_DOCUMENT_TOKEN_TO_BE_REPLACED

What was that strange din coming over the live feed from Ludwig Recital Hall on Friday evening, July 23, as the Miami String Quartet filed onstage to play the third faculty recital of the Kent Blossom Music Festival? Accustomed as we were during the pandemic ban on live audiences to hearing the sound of no hands clapping, it was both startling and thrilling to witness a large crowd putting their hands together to welcome one of the Festival’s perennial favorites back for an in-person performance. END_OF_DOCUMENT_TOKEN_TO_BE_REPLACED

Practical reasons aside, there aren’t many ensembles who can put together an all-Mozart evening as elegantly as The Cleveland Orchestra. END_OF_DOCUMENT_TOKEN_TO_BE_REPLACED