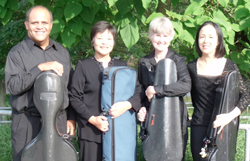 Is there any better way to spend a Sunday afternoon than listening to great classical chamber music performed by fantastic musicians— who are also donating their talents on behalf of a humanitarian cause? On Sunday, April 19 beginning at 3:00 pm in the Meeting House of First Church Oberlin, the Amici String Quartet will perform a benefit concert for Family Promise of Lorain County. The concert will include music by Beethoven and Schubert. The event is free and open to the public, although donations to support Family Promise are encouraged.

The Amici Quartet, Takako Masame and Miho Hashizume, violins, Lynne Ramsey, viola, and Ralph Curry, cello, all of whom are members of The Cleveland Orchestra, will begin the afternoon with Beethoven’s Quartet No. 2 in G major, op. 18. During intermission, Family Promise Executive Director Lois Pozega will speak about the agency’s important mission, and former clients will share their own inspirational stories about how the assistance they have received from the agency impacted their lives. END_OF_DOCUMENT_TOKEN_TO_BE_REPLACED 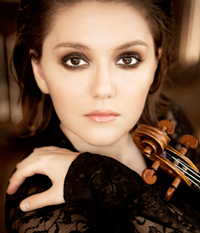 The highlight of the night was Mozart’s Violin Sonata in e minor. Howsmon and Zhulla poignantly rendered the bare opening statement of the first theme, setting a mood of solemn pathos. The heartbroken melody of the second movement was wrenching, decorated by the most distinctive feature of Zhulla’s playing: her wonderful vibrato. Howsmon’s crystalline accompaniments provided stark relief for the emotive theme. When the music turns to major in the middle section, it is like a retreat into a comforting memory. But the solace does not last, as the pain of the present rushes back to end the piece. END_OF_DOCUMENT_TOKEN_TO_BE_REPLACED 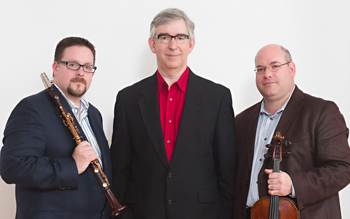 Case in point: Max Bruch’s Eight Pieces, op. 83, were composed for Bruch’s clarinetist son, Max. The Hawkeye elected to play two sets of four pieces each at the beginning and end of their program, leading off with Nos. 8, 6, 5 and 7 and finishing with the first four, in order. END_OF_DOCUMENT_TOKEN_TO_BE_REPLACED 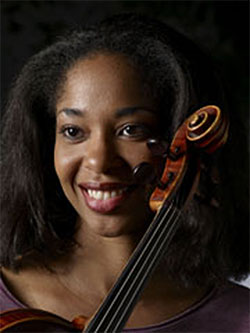 Violist Eliesha Nelson has a penchant for discovering interesting music written for her instrument. Her 2009 release Quincy Porter Viola Works, received four Grammy nominations and won in the Best Engineered Album Classical category. The tag line of her website homepage states: Showcasing the viola repertoire’s lost gems. And stating why her 2011 release Russian Viola Sonatas did not include the sonata of Shostakovich, Nelson writes, “I love the Shostakovich Sonata, but did not include it because I love to explore music off the beaten path.”

On Sunday, April 28 in Pilgrim Church, Eliesha Nelson and pianist James Howsmon presented a captivating recital that featured works by two lesser known composers as well as a household name on the final concert of Arts Renaissance Tremont’s season.

Nelson referred to the programming of the first half as “a homage to 20th Century American Music.” Composer Ross Lee Finney (1906 – 1997) was a student of Nadia Boulanger, Edward Burlingame Hill and Alban Berg as well as Roger Sessions and served on the faculties at Smith and the University of Michigan. END_OF_DOCUMENT_TOKEN_TO_BE_REPLACED

As the audience took their seats, a special twelve member Oberlin string orchestra was tuning up under conductor and harpsichordist Webb Wiggins. The final rounds would require contestants to play the whole of Vivaldi’s 26th Concerto from memory as well as the last movement of Libby Larsen’s Concert Piece for Bassoon and Piano and a piece of each contestant’s choice. END_OF_DOCUMENT_TOKEN_TO_BE_REPLACED

The Diamond Brass Quintet opened Rocky River Chamber Music Society’s new season on Monday, October 12 with nobody in the pews at West Shore Unitarian Universalist Church. Like most performances these days, the concert was only attendable online. The players were widely-spaced on the stage, plexiglass shields were in place to cut down on aerosol transmissions, and the quintet took two intervals to go outdoors and let the air in the sanctuary refresh itself. (Rehearsals had been held outside as well.) END_OF_DOCUMENT_TOKEN_TO_BE_REPLACED

“Bewitched,” the first subscription concert of this season by Les Délices, can be summed up in one word: sensational. In her introductory remarks, director Debra Nagy talked about the “Embracing Change” theme of the season and completely rethinking the concert experience for streaming. The detailed planning was in evidence throughout the program. “Bewitched” was not just a concert; it was a carefully planned musical film, with elements of drama and music appreciation, all in support of the inspired program choices featuring Medea and Circe, two famous witches (or sorceresses, if you prefer) of classical antiquity. END_OF_DOCUMENT_TOKEN_TO_BE_REPLACED

END_OF_DOCUMENT_TOKEN_TO_BE_REPLACED

Though it had amassed a vast trove of audio over the decades, The Cleveland Orchestra has come late to the game in the video department. Even so, the organization wasn’t about to rush to produce the equivalent of home movies to keep its patrons engaged while live events were on hold. END_OF_DOCUMENT_TOKEN_TO_BE_REPLACED

END_OF_DOCUMENT_TOKEN_TO_BE_REPLACED

Although it wasn’t the original plan to go online last weekend for the final round of the James Stroud Classical Guitar Competition, moving to a digital format suited the event well. Young performers Aytahn Benavi, Patricia Hernandez, Ian Tubbs, and Eric Wang played in the intimate setting of their own homes, giving everyone who tuned in a front row seat. END_OF_DOCUMENT_TOKEN_TO_BE_REPLACED