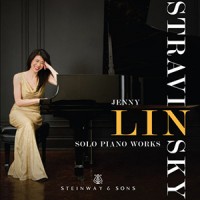 If Igor Stravinsky were alive today, he would probably get along quite well with the kind of people who live in Brooklyn, sport wispy facial hair, don ugly-patterned sweaters, and qualify their interests and appearance as “ironic.” For irony seemed to be intrinsic to Stravinsky, especially once he entered middle age and began co-opting other styles of music, from Baroque to jazz. Parody is particularly evident in his solo piano works, recently recorded by Jenny Lin for the Steinway & Sons label.

Stravinsky did not compose much for piano, and many of the works he did write are short character pieces. Lin’s CD consists of two larger works, the Sonata and Serenade in A, thirteen small pieces (one of which is a simple arrangement of Mussorgsky and two of which are unfinished sketches), and an arrangement of music from the Firebird Suite. END_OF_DOCUMENT_TOKEN_TO_BE_REPLACED 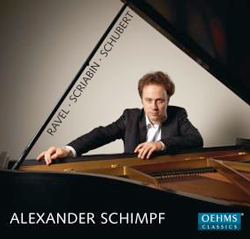 Though Schimpf confesses in his thoughtful liner notes that “the only determining idea for this CD” was “recording works that are particularly dear to my heart”, once his program was chosen, he noticed interesting bits of connective tissue between the pieces. They happen to be each composer’s final compositions for the piano, “late works” even for those who, like Schubert, died young. For Scriabin, op. 74 was the last music he wrote. Additionally, Ravel and Scriabin’s pieces date from 1914, “a highly charged period in Central Europe in every respect — socially, artistically and philosophically.” And the “dance-like elements” in Ravel’s suite “also determine large sections of the 3rd and 4th movements of the Schubert Sonata.”  END_OF_DOCUMENT_TOKEN_TO_BE_REPLACED