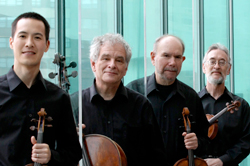 string quartets seem to change first violinists a bit more often than second violinists, violists and cellists, but the Juilliard String Quartet may have established a record: three different individuals have sat in its driver’s seat in the last fifteen years.

When Robert Mann, one of the quartet’s founders in 1946, decided to retire in 1997, second violinist Joel Smirnoff moved up a chair. After Smirnoff left to become president of the Cleveland Institute of Music in 2008, Nicholas Eanet, one of the concertmasters of the Metropolitan Opera Orchestra, was chosen to take his place. Ebullient at receiving the good news about his appointment, Eanet went inline skating in Central Park and broke his wrist — while trying to avoid an accident. Though the wrist healed in record time, Eanet withdrew a year later for unrelated health reasons. Joseph Lin took his place in November of 2011. END_OF_DOCUMENT_TOKEN_TO_BE_REPLACED

Jackson began the program with a recitation of Langston Hughes’ poem “Helen Keller” — the first of five poems by Hughes that served as interludes between each piece on the first half. END_OF_DOCUMENT_TOKEN_TO_BE_REPLACED

Pianos with pins and tape on strings, a bass drum and tam tam, crotales, Almglocken, and vibes. Microphones were hooked up all around the instruments. The feed was sent to speakers around the room. Lighting designer Nicholas Houfek hung incandescent globes over the arrangement of instruments from thin black wires stretching across the beams. END_OF_DOCUMENT_TOKEN_TO_BE_REPLACED

From the podium, Elim Chan set an ambitious tone for the evening. The rising star conductor, here in her Cleveland Orchestra debut, has a commanding style, and every twist and turn in Saturday’s performance tracked closely with her baton. END_OF_DOCUMENT_TOKEN_TO_BE_REPLACED