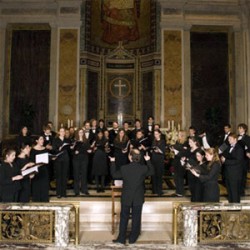 Since its founding in the early 1960’s, the Oberlin Collegium Musicum has become one of the most popular ensembles on campus both among conservatory and college students. Some would say that over the years it has developed something of a cult following both in its on campus and off campus performances. The Collegium has varied in character over the decades, but for the past 20 years, the group has been a 40-voice chorus conducted by Steven Plank, professor of musicology at the Oberlin Conservatory.

The Collegium will celebrate this milestone in a two-day reunion on February 19 & 20 culminating in a free performance on Saturday evening at 8 pm in Warner Concert Hall. Some sixty Collegium alumni will gather to sing a program of renaissance music, and Plank has taken advantage of this large group of singers to open and close the concert with one of the most spectacular pieces in the 16th century repertory: Thomas Tallis’ forty part motet for eight choirs of five voices each. This mammoth piece will be sung both in its Latin (‘Spem in Alium’) and English forms (‘Sing and Glorify’).

Dr. Plank has had a remarkable influence on his students over the years. Here are interviews with three alumni who will be joining the reunion chorus this weekend. END_OF_DOCUMENT_TOKEN_TO_BE_REPLACED

Jackson began the program with a recitation of Langston Hughes’ poem “Helen Keller” — the first of five poems by Hughes that served as interludes between each piece on the first half. END_OF_DOCUMENT_TOKEN_TO_BE_REPLACED

Pianos with pins and tape on strings, a bass drum and tam tam, crotales, Almglocken, and vibes. Microphones were hooked up all around the instruments. The feed was sent to speakers around the room. Lighting designer Nicholas Houfek hung incandescent globes over the arrangement of instruments from thin black wires stretching across the beams. END_OF_DOCUMENT_TOKEN_TO_BE_REPLACED

From the podium, Elim Chan set an ambitious tone for the evening. The rising star conductor, here in her Cleveland Orchestra debut, has a commanding style, and every twist and turn in Saturday’s performance tracked closely with her baton. END_OF_DOCUMENT_TOKEN_TO_BE_REPLACED