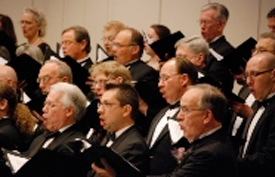 In celebration of its 30th Anniversary, the Canton Symphony Chorus joined the Canton Symphony Orchestra on February 16 for the Masterworks Series concert at Umstattd Hall. Augmented by the Malone University Chorus, the combined vocal ensemble of 125 members, conducted by Chorus Director Britt Cooper, gave a truly beautiful account of the first work on the program, Mozart’s brief motet, Ave verum corpus (Hail True Body). Hushed and ethereal, the performance was nonetheless an inspiring tone-setter for the more dramatically expansive Brahms German Requiem that followed, conducted by Gerhardt Zimmermann.

Unlike the traditional Latin Mass for the Dead, this requiem eschewed the blunt Biblical language of a wrathful God dispensing the fire and brimstone of the Last Judgment. END_OF_DOCUMENT_TOKEN_TO_BE_REPLACED

END_OF_DOCUMENT_TOKEN_TO_BE_REPLACED

Then, you heard all the qualities that make for a stunning soloist. Winner of the 2013 Cleveland International Piano Competition, Khristenko was back in town this month for a recital in Piano Cleveland’s summer series, Piano Days @CLE. And he couldn’t help but revel in the spotlight a little, even as he settled into a more collaborative role at the keyboard for his program, “Stanislav and Friends.” END_OF_DOCUMENT_TOKEN_TO_BE_REPLACED