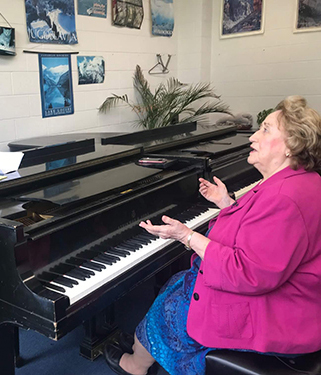 It was around 8:20 pm on October 10, 2001. I was sitting in Baldwin Auditorium at Duke University listening to Mozart’s Piano Concerto No. 9 in E-flat, K. 271, Le Jeunehomme. My teacher of six years, Olga Radosavljevich, known as “Ms. Olga,” was performing with the Duke Symphony Orchestra led by her longtime friend, conductor Harry Davidson. As a Cleveland Institute of Music Artist Diploma candidate, I understudied the piece and traveled to Durham, NC with Ms. Olga. She was having health issues that fall and was not sure if she could perform.

After the first movement was splendidly done, Ms. Olga stood up. There was an audible gasp from the audience. She stood up, hunched down at the piano looking as if she had lost an earring. Maestro Davidson spoke to her and after a few minutes, she sat down at the keyboard again. The orchestra began the heart-wrenching introduction of the slow movement in c minor. Ms. Olga joined in with the piano’s melody. However, after a few bars, she stopped. Something was clearly wrong. Was she having a memory slip?