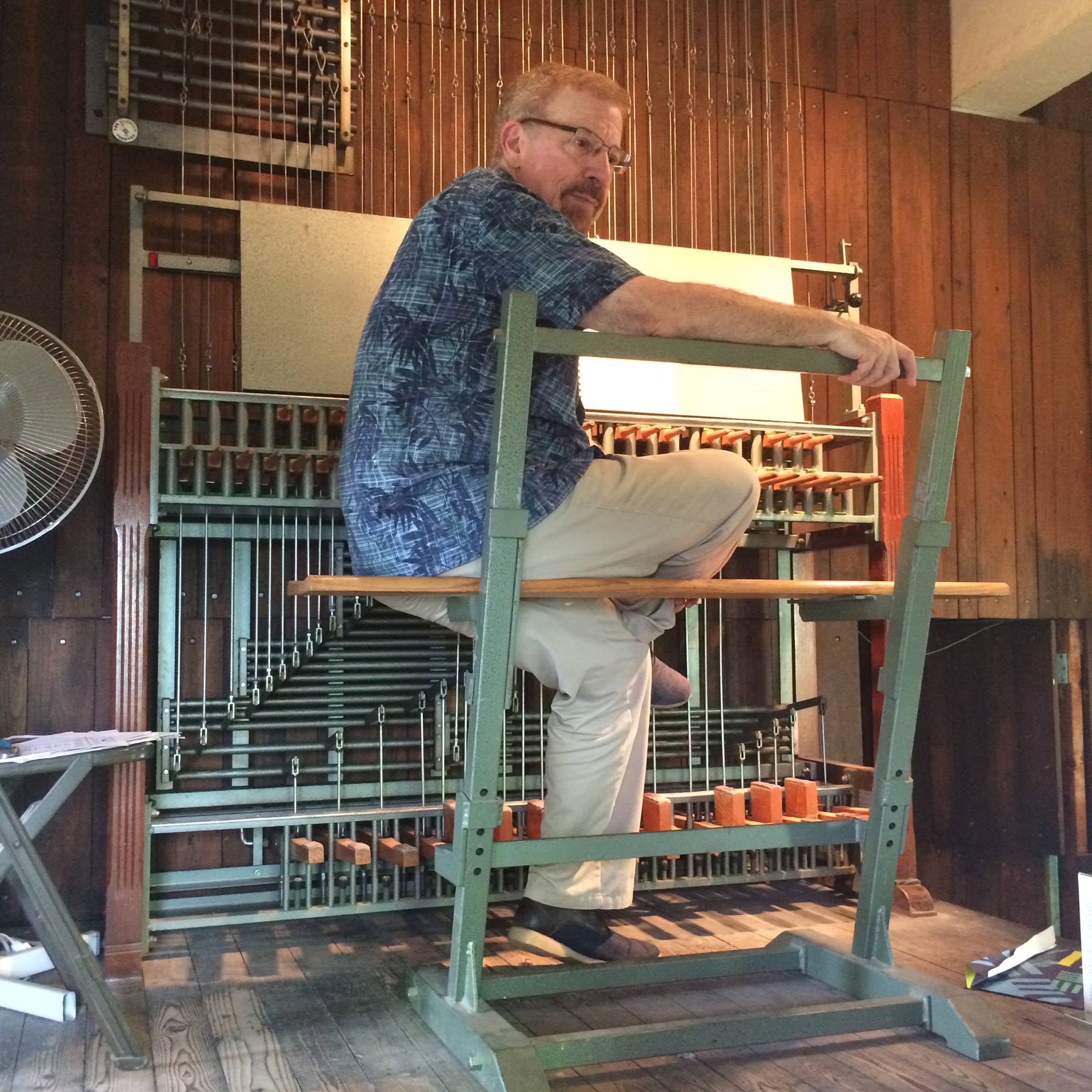 As a high school student, George Leggiero enjoyed collecting chiming clocks. When he arrived as a freshman at Case Western Reserve University, he couldn’t help but notice the mammoth chiming timepiece in the tower of the Church of the Covenant — especially when he moved next door into Mather House for his junior and senior years. “My room overlooked the tower, so you either got to love the bells or you moved,” he said in a telephone conversation.

Leggiero obviously got to love them — in October, he’ll celebrate his 45th anniversary as resident carillonneur for the McGaffin Memorial Carillon, a job that came with a learning curve. “I’d had two semesters of piano lessons when the church asked me if I was interested in the job. I worked by myself for a month, I auditioned, they hired me, and I’ve been there ever since.”

Time out for a brief comparison of church bells. There are bells in various numbers that merely ring to call people to services or mark certain hours of the day. There are larger sets of bells that form a scale or peal that are rung British-style in “changes” or mathematical patterns that can go on for hours until permutations are exhausted. Then there are carillons — collections of 23 or more tuned bells on which trained carillonneurs can play arrangements of all kinds of music. The latter are popular in Belgium and the Netherlands, and there are four in the Cleveland area — two-octave instruments at St. Paul’s in Cleveland Heights and St. Christopher’s in Gates Mills, and the 47-bell, four-octave carillons at the Covenant and the Church of the Savior in Cleveland Heights. 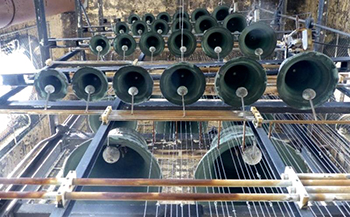 Judging by the ancient appearance of the French Gothic Church of the Covenant, George Leggiero assumed the carillon had been there forever. But in fact the 47-bell instrument had only been installed by the Royal Eijsbouts Bell Foundry of Asten, the Netherlands, months before he arrived in Cleveland. This weekend, the carillonneur and two of his colleagues will celebrate its 50th anniversary in events on Friday, Saturday, and Sunday. 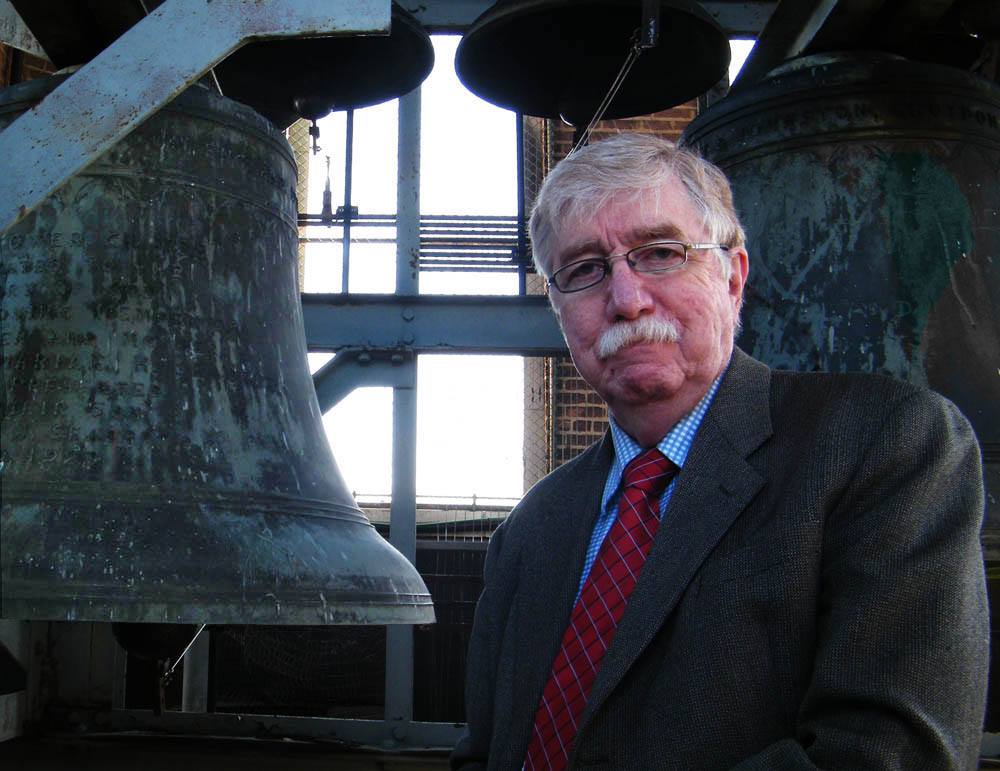 “David Osburn (above) of St. Paul’s Episcopal Church in Cleveland Heights will play the usual Friday noon lunchtime concert, which will include Irish and Scottish music honoring Alexander McGaffin,” Leggiero said. “By coincidence, his grandchild and great grandchild will be in Cleveland for the occasion, and they’ve organized a family reunion.” Leggiero himself will be out of town attending the annual meeting of the Guild of American Carillonneurs in Springfield, Illinois. 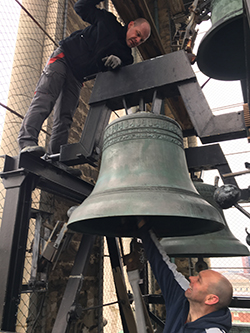 On Saturday at noon, the restored Cragin Peal, a separate array of three bells hung on yokes and activated by electric motors, will announce the kickoff of Parade the Circle, in which the Church of the Covenant has entered a special float — with the theme of “Bats in the Belfry,” a suggestion by Robin Van Lear, Artistic Director of Community Arts for the Cleveland Museum of Art. “They’re aiming at having 47 bats in all shapes and sizes participate,” Leggiero said.

Then on Sunday, the church will mark the anniversary with bell-themed readings and music at its morning service, followed by music from the carillon. The main event will begin at 2:00 pm. “I’ll give a pre-concert talk at 1:15 pm, then David Osburn and I will join Patrick Macoska, a retired Michigan architect, in a varied concert including music for four fists, followed by a reception,” Leggiero said.

The carillonneur’s quip about “four fists” refers to the technique of striking the levers of the carillon “keyboard” with the sides of the fists. “You can also occasionally open your hand to play fourths or fifths,” Leggiero said, adding that larger bells are operated with similar levers played with the feet. Like organ music, music for the carillon is written on staves, in treble clef for the hands and bass clef for the feet. Beyond that, carillon playing is very different. “On any other instrument you worry about releasing notes. On the carillon, when you ring a bell it sounds forever — whether it’s the right note or not.” 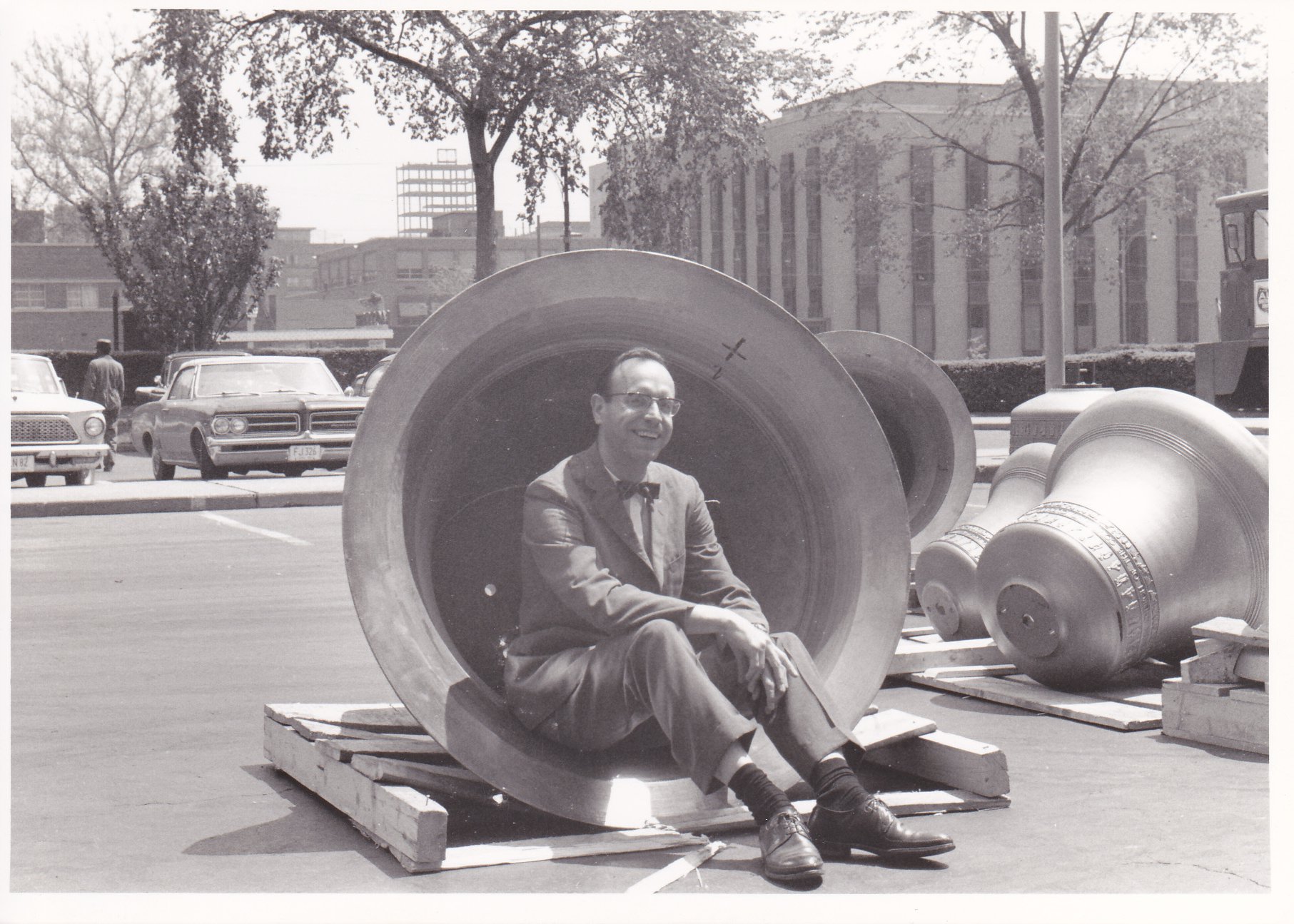 Setting those bells in motion is not as strenuous as you might think. “15,000 pounds of bronze sounds like a lot, but you’re only moving the clappers,” he said. “There are some instruments where the biggest bell alone weighs 15,000 pounds or more. I’ve played some carillons where you have to stand up on a lever to make the clapper work.”

Still, carillon playing is a physical activity. “You are moving around a lot, and since the tower isn’t air conditioned, an hour-long recital can wear you out,” Leggiero said. Then there’s the exertion involved in simply climbing the circular stairs to the ringing chamber. “When I joined a gym 15 or 20 years ago, they did a strength assessment and couldn’t figure out why my legs were in the top percentile and my arms were in the lowest percentile. Now, my left knee is just beginning to complain after 47 years of climbing stairs counterclockwise.” 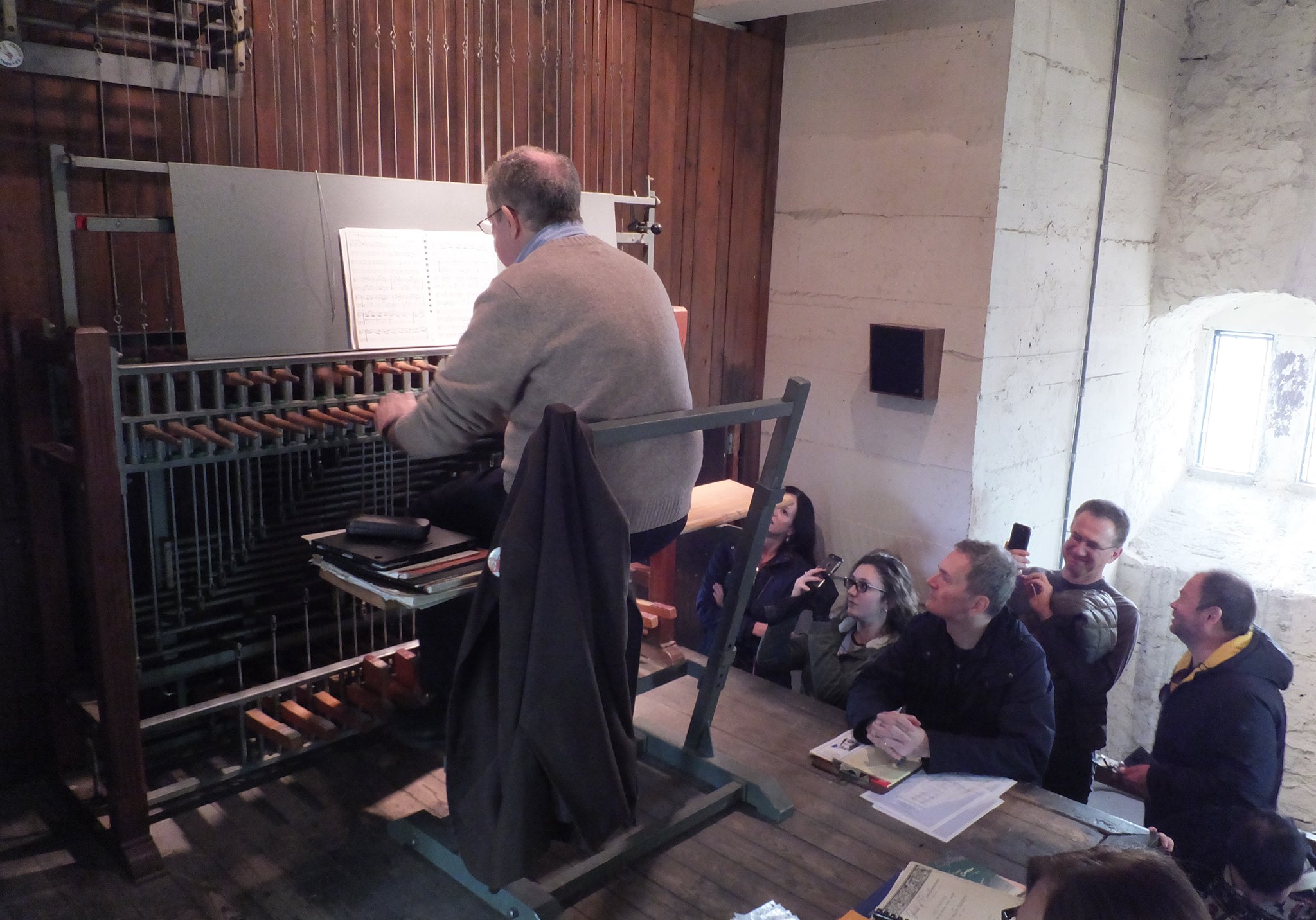 One thing Leggiero doesn’t need to worry about is tuning his instrument before he plays, although the metal wires that activate the bell clappers may need some adjustment. Weather doesn’t seem to affect the pitch of the bells, “but they do sound crisper and brighter in winter and more mellow during humid summers, when their tones also carry farther,” he said.

While the Covenant carillon was originally installed by the church, its maintenance and administration is now the responsibility of the Friends of the McGaffin Carillon, a non-profit organization that sees the Tower as a community resource and which paid for the restoration of the peal. Leggiero hopes that a contract will be signed in the near future to add two bells, renovate the ringing mechanism, and replace both the keyboard and the practice keyboard that allows carillonneurs to rehearse using tone bars, “so we can stay friends with the neighbors,” he said. 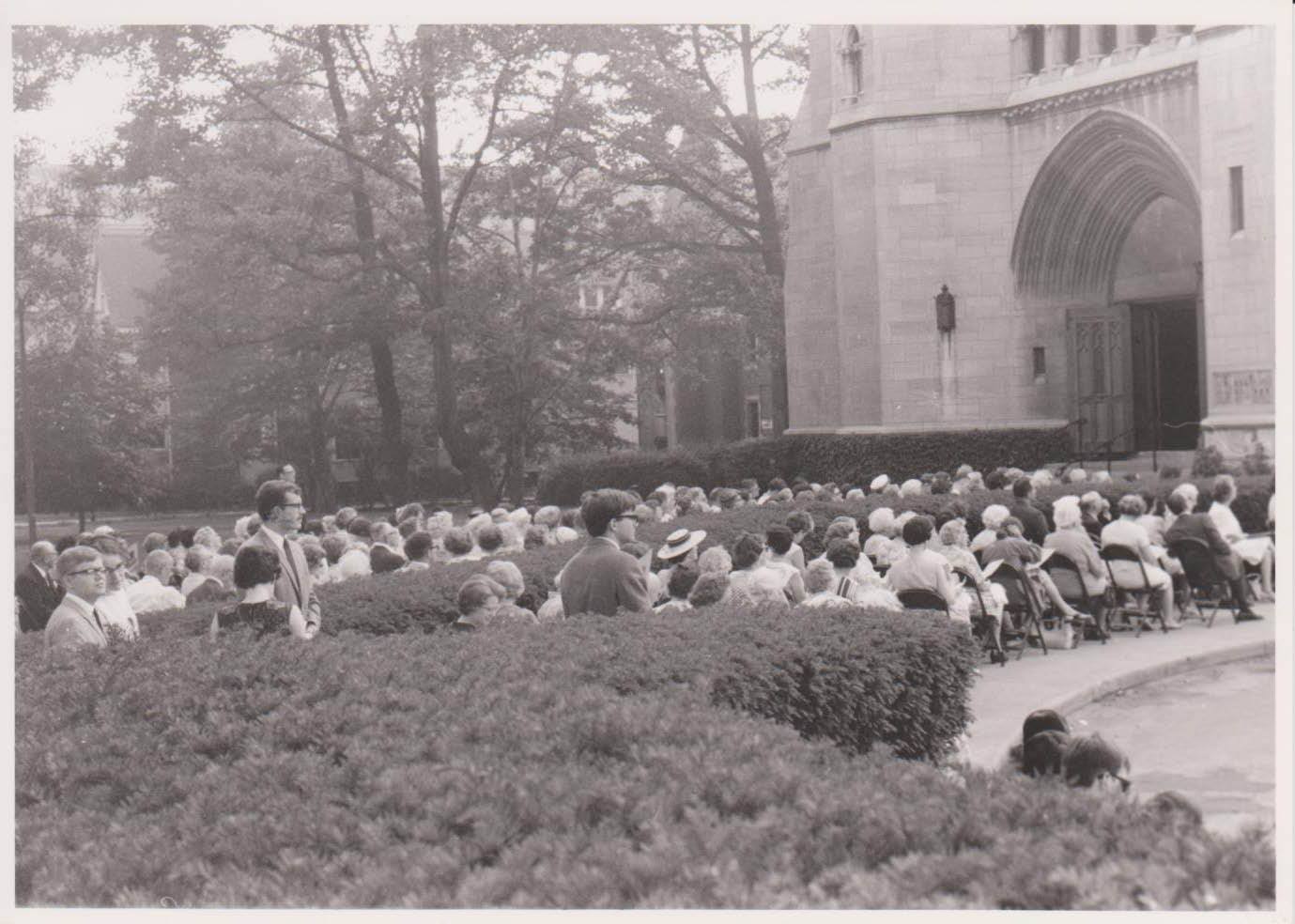 “I’d also like to start a student guild to play the instrument daily,” he added. He has a few students already, and has received an Ohio Arts Council Traditional Artist Grant to support his activities. “The people in Columbus were happy to have a new type of instrument to fund.” He’s also looking to involve students from the nearby Cleveland School of the Arts.

Future carillonneurs can rest assured about one thing. Despite the theme for the Covenant’s Parade the Circle float, Leggiero says there are no bats in the belfry. “Maybe a few pigeons, but that’s it.”

Photos from the 1968 installation and dedication: music director Henry Fusner tries out a bell in the parking lot; the audience on the church lawn at the dedication recital.

END_OF_DOCUMENT_TOKEN_TO_BE_REPLACED

Rodgers & Hammerstein’s Cinderella was originally produced for television in 1957 — seven years after the animated Disney film was released — and starred Julie Andrews. According to the Rodgers & Hammerstein website, it was viewed by over 100 million people. END_OF_DOCUMENT_TOKEN_TO_BE_REPLACED

The story line has its origin in an 1855 play and an 1842 farce that Thornton Wilder mined for his 1938 play The Merchant of Yonkers. When that turned out to be a flop, in 1954 Wilder made the crucial decision to re-center the show around the character of the legendary marriage broker Dolly Gallagher Levi and renamed it The Matchmaker. END_OF_DOCUMENT_TOKEN_TO_BE_REPLACED

The Dodero Center for the Performing Arts at the Gilmore Academy in Gates Mills is one feature of an impressive campus. The auditorium is shallow, the stage is deep, and the ensemble played without a shell. Throughout the program, the sound, especially in instruments’ lower registers, tended to disappear. END_OF_DOCUMENT_TOKEN_TO_BE_REPLACED