When the internationally famous organist and composer Jean Guillou ended his 52-year-long run as tenured organist at the Church of St.-Eustache in Paris in 2015, two successors were named, including Thomas Ospital, who was 20 at the time.

“It’s never simple to follow such a musician as Guillou,” Ospital said in a telephone conversation from Tulsa, where he was due to play a recital on Friday evening. “You have the choice between being yourself or doing something new. I only met him twice, which made it easier.”

Ospital, who spent six months in New Orleans when he was 21 and made regular concert tours until COVID arrived, will play a free recital at Trinity Cathedral on Tuesday evening, November 1 at 7:30 pm. His program, co-sponsored by Music and Art at Trinity and the Cleveland chapter of the American Guild of Organists, includes works by Buxtehude and J.S. Bach on the 1977 Flentrop Orgelbouw instrument of Dutch Baroque design, and music by Ravel, Duruflé and Franck on the Aeolian-Skinner organ in the American romantic style rebuilt by Muller in 2022.

Ospital said that a single work by Dietrich Buxtehude drew him into the world of the classical organ. “I started playing his Nun komm, der Heiland Heiland and fell in love.” At Trinity on Tuesday  he’ll play another Buxtehude work, the Praeludium in d-minor, followed by Bach’s Trio Sonata No. 1 in E-flat,

Being French, Ospital loves Ravel — a composer born not so far from the organist’s own home town in the Basque region of the country. He profited from the COVID downtime by transcribing several movements of Ma mère l’Oye for organ, working directly from Ravel’s orchestration. In observance of César Franck’s anniversary, Ospital has programmed the second of the composer’s Three Chorales, and will end with Maurice Duruflé’s Toccata.

Well, not quite end with. Visiting French organists are almost invariably asked to improvise on a submitted theme, a practice that yields some wonderful — or wonderfully strange results.

I asked Thomas Ospital to name the strangest theme he had ever been given. Without hesitation, he said that on the day that Italy named its first woman president, he was asked to improvise on what turned out to be the fascist tune Fratelli d’Italia, the Italian national anthem, which he did his best to bury.

Americans unfamiliar with the ways of French culture and organ lofts may appreciate some unpacking of Ospital’s official title, which encapsulates the duties of its office holder. “Titulaire des Grand Orgues de St-Eustache” essentially means “organist and other duties as required,” and some of the more important ones at St-Eustache require the incumbent to oversee the acquisition and maintenance of organs. 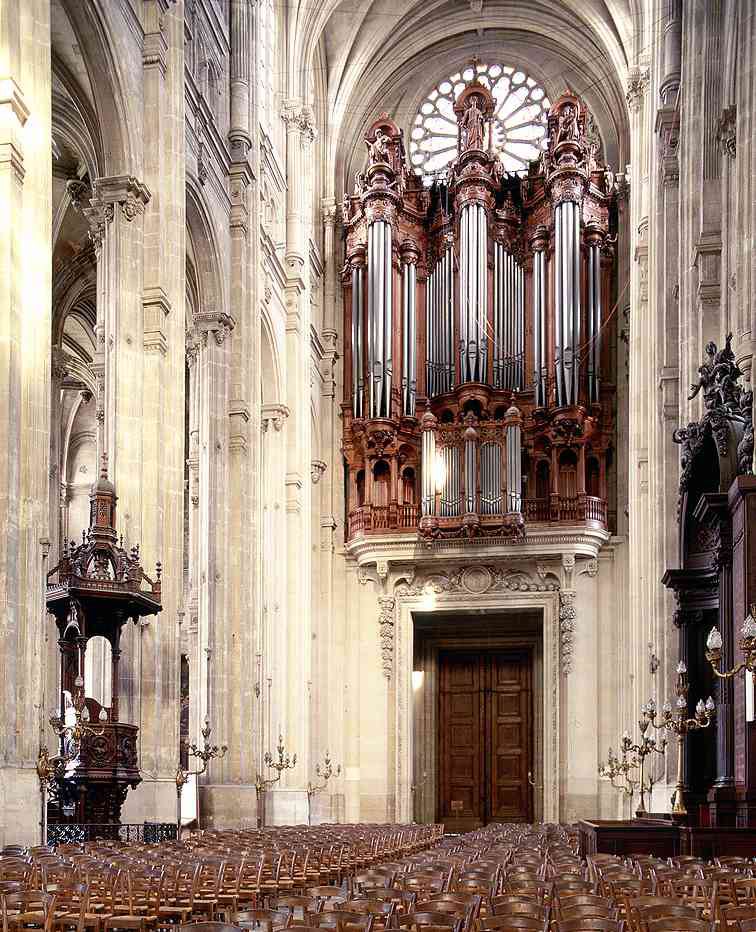 The huge and handsome case of the St Eustache instrument has accommodated a surprising number of tenants since 1854 when casework was delivered, including

Thomas Ospital led me through the modern history of organs in St-Eustache, which is fascinating and complicated.

“Builders kept adding stops to the point that the instrument was the largest in France, and the original organ didn’t exist anymore. And there were big issues with the electric every time you turned it on.”

In 1967, in the middle of the Baroque revival, the builder Dunon set out to build a new mechanical-action of 105 stops with no mechanical assistance to lighten the key action between the console and pipework. 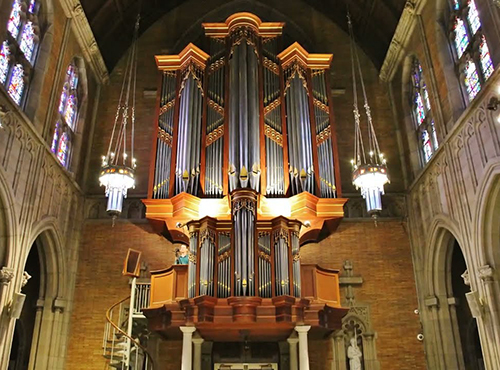 “That’s just impossible,” Ospital said. After seven years’ delay, experts were called in who said such an instrument would never be finished, and would never work. So the City of Paris took it out and held a new competition that was won by the Dutch firm of Van den Heuvel, who built a new instrument at warp speed in only a year and a half.

To make it possible to play an instrument so large, Van den Heuvel installed five Barker machines — a pneumatic system which multiplies the force of a finger on the key of a mechanical-action pipe organ, but is so noisy that it requires installation in sound-isolated rooms. Now that organ is experiencing problems.

Ospital said, “I learned to do the settings myself and I make adjustments every week. It’s annoying, but if I didn’t do it, the organ would be out of use.”

“Other duties as required…”

Supported by engagingly, yet simple staging by Cara Consilvio, a well-prepared cast of singers told the archetypal story of Cinderella with charm and flair. Framing the production was  a sparse but colorful set and wonderful lighting by Dave Brooks. END_OF_DOCUMENT_TOKEN_TO_BE_REPLACED

END_OF_DOCUMENT_TOKEN_TO_BE_REPLACED

The music isn’t easy to play, either. Over the course of two hours, all of the musicians brought fantastic focus to the unrelenting tricky rhythms and countless layers of parts, all of which require a high level of individual responsibility. Even in the moments of calm, the accompaniment remains perpetually unsettled. Adams — who made a sprightly presence on the podium — combines minimalist, repeating motives in gradual layers, which eventually become so dense they overwhelm the senses. Lisa Wong deserves special mention for her thorough preparation of the Cleveland Orchestra Chorus, as does Jennifer Rozsa for the Children’s Chorus, which made a brief but memorable appearance in the last few minutes. END_OF_DOCUMENT_TOKEN_TO_BE_REPLACED