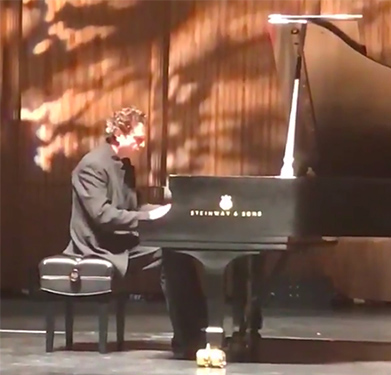 As snow came down outside on Thursday, March 8, an absorbing evening of piano cornerstones warmed the inside of E.J. Thomas Hall in Akron. This performance by Andreas Haefliger was the 12th of Tuesday Musical Association’s annual concerts that honor the late pianist Margaret Baxtresser, a musical giant of Northeast Ohio.

For this program, Haefliger also chose musical giants: two late piano sonatas by Beethoven. Before each, he played a short work by Mozart. The first half paired Mozart’s Fantasy No. 4 in c, K. 475 with Beethoven’s Piano Sonata No. 28 in A, Op. 101. Later, Mozart’s Adagio in b, K. 540 was paired with Beethoven’s Piano Sonata No. 29 in B-flat, Op. 106, the famous “Hammerklavier.”

As a musician, Haefliger is an intellectual athlete. He hits all his marks with clarity. Everything is in its rightful place and phrased with precision, while he remains distant enough to let the music speak for itself. His virtuosity is well-controlled and there is never a moment of indulgence. His directness of purpose keeps the listener equally focused as he spins out minutes of musical argument.

Haefliger’s playing of Mozart showed the beauty of this approach — and its problems. The brooding and wandering Fantasy is an interpreter’s dream of possibilities: a stentorian opening of dark colors, sections of sweet melodies full of panache, and brilliant virtuosic passages replete with fireworks. And the Adadio is a wonderful, poignant work with plenty of flair. In the softer, more lyrical music, Haefliger’s use of pedal and his light touch were unforgettably ravishing. As he reached mid-volume, his articulation became more precise, each note sounding like a pearl on a string, which underlined Mozart’s exquisite melodies with clarity and a sense of inevitability. But when he reached into the loudest dynamics and fastest technical music, the mixture of gusto and brio alongside his steely-fingered approach became bewildering and unsettling.

This makes listening to Haefliger fascinating and engaging. But Haefliger isn’t here to make the music easier. He instead gives it a hermetic charm. His playing never ceases to be amazing, but there is a coldness that resembles the feeling of being a lay Catholic pre-Vatican II — what do those words mean?

The pianist’s playing of Beethoven’s sonatas was again precisely sure of where they wanted to go in their stentorian fugues and grandiloquent slow movements, but it didn’t necessarily bring the listener inside to learn the composer’s secrets.

Haefliger’s stage manner underlines this feeling. He sits right down and begins playing while the audience is still settling and making noise. He also rushes through breaks between movements, not allowing time to reflect. This gives his playing a sense of impatience as well as gusto.

He played the opening quasi-barcarolle of the A-major Sonata with a lovely lilt, but his sense of Beethoven’s architecture was so broad that many small details flew by. When the opening music returned, it was more of a shock that soon disappeared rather than a joyful memory.

His “Hammerklavier” was equally ravishing and reeling. The famous opening, with its huge chords and left-hand leaps, was grand in every way, but he started it so quickly after accepting applause for the Mozart Adagio that there was no time to prepare. Along the way, there were moments of great beauty. The point when the final fugue section winds to a brusque stop and then continues at half speed was miraculous, but most of the fugue was, in fact, harsh and baffling.

This recital left me with a well-earned respect for Haefliger’s mind, musicianship, and virtuosity. If only there had been more suppleness and joy along the way.

The cimbalom was the feature of the show, an instrument capable of taking on many personas. Its performer, Chester Englander, has shaped his career around the instrument, and has inspired composers to write more repertoire for it, some of which was presented on the program. END_OF_DOCUMENT_TOKEN_TO_BE_REPLACED

You wouldn’t expect that acoustic from a glance at the nave, which is wide and long, but not especially lofty. But when I guest conducted a local amateur choir and professional orchestra in Beethoven’s Mass in C there a few years back, during the first rehearsal we released the final chord of the “Gloria” and listened in astonishment for the next several seconds. The sound continued to roll down the space like the big wave that surfers dream about. END_OF_DOCUMENT_TOKEN_TO_BE_REPLACED