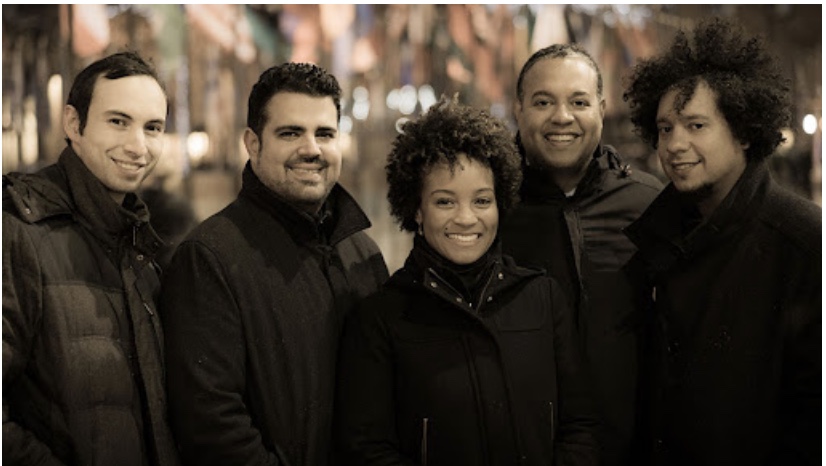 The Harlem Quartet might consider changing its name to include an honorary fifth member. The string ensemble took the stage as part of Akron’s Tuesday Musical series on March 1, joined by pianist and composer Aldo López-Gavilán, whose close connection to the group brought out the best in each player.

If chamber music is all about relationships — the give and take between performers — then last week’s program at E.J. Thomas Hall had an unfair advantage. López-Gavilán’s brother, Ilmar, plays first violin for the Harlem, meaning the pair’s dynamic is more than strictly musical.

When they get together (Ilmar has made a career in the U.S., Aldo in the brothers’ native Cuba), something special happens, of interest beyond just the classical crowd. The two were the subject of a 2020 documentary, Los Hermanos/The Brothers, about their determination to collaborate across borders, and across genres.

In concert, you can hear the relationship at work. Ilmar was all business Tuesday, leading the quartet with efficiency and no wasted expression — an approach that let Aldo stay absorbed in the keyboard part, whether in accompaniment or spinning out an intricate solo.

The second half was dedicated to Aldo’s original compositions, and Pan con Timba, the closing work, showed the brothers’ complementary playing styles. Ilmar took charge with a violin solo that wasn’t flashy but confident and insistent in its rhythm against the rest of the ensemble. All the while Aldo handled the piece’s Latin jazz foundation, plus his own improvisations, like second nature.

The pianist/composer might start in the Afro-Cuban tradition, but his interests range well beyond that. Viernes de Ciudad, inspired by a day in London, sounded thoroughly cosmopolitan, opening with the wails and pitch bends of Arabic music, transforming at some point into an Irish reel, and ending with the pleasing chord progressions of a British pop song. Likewise, he’s omnivorous as an improviser, able to take an extended solo — like in Talking to the Universe — and grow it to rhapsodic proportions.

Aldo’s arrangements always invited the other musicians into the fold. Eclipse, originally a duet for the brothers, still began with just violin and piano, but the rest of the quartet joined in to build the emotion. And the jazz stylings rubbed off on everyone. Aegean Dream had cellist Felix Umansky sounding notes on his instrument like an upright bass.

The group was in classical territory for the evening’s first half. The strings were at times soloists, at times one unit pitted against the keyboard in Robert Schumann’s Piano Quintet in E-Flat, Op. 44. Across four movements, themes repeat, again and again, and the Harlem players kept their delivery consistent.

Violist Jaime Amador understood how to savor a musical moment, drawing out his tone in a passage where everyone else was pizzicato. Second violinist Melissa White went seamlessly from background to foreground when the score called for it.

And of course, whenever the piano and first violin were in conversation, the ensemble knew what to do.

Jackson began the program with a recitation of Langston Hughes’ poem “Helen Keller” — the first of five poems by Hughes that served as interludes between each piece on the first half. END_OF_DOCUMENT_TOKEN_TO_BE_REPLACED

Pianos with pins and tape on strings, a bass drum and tam tam, crotales, Almglocken, and vibes. Microphones were hooked up all around the instruments. The feed was sent to speakers around the room. Lighting designer Nicholas Houfek hung incandescent globes over the arrangement of instruments from thin black wires stretching across the beams. END_OF_DOCUMENT_TOKEN_TO_BE_REPLACED

From the podium, Elim Chan set an ambitious tone for the evening. The rising star conductor, here in her Cleveland Orchestra debut, has a commanding style, and every twist and turn in Saturday’s performance tracked closely with her baton. END_OF_DOCUMENT_TOKEN_TO_BE_REPLACED