“There are more things in heaven and earth,” Shakespeare wrote in the voice of the iconic character Hamlet, “Than are dreamt of in your philosophy.” The line has supernatural overtones in context, but the essential message — that the staggering variety and abundance of the world defies comprehension — applies just as well to human cultural production. As Wu Man and the Huayin Shadow Puppet Band demonstrated last week at the Cleveland Museum of Art, even the traditional music of a single country can yield practices and sounds that seem universes, rather than mere miles or years, apart.

Wu Man plays the pipa, the Chinese member of the transcontinental plucked-string family that also includes the oud and the lute. At this performance in Gartner Auditorium on March 21, Wu mapped out the sonic capabilities of the instrument. Its tone, dynamic yet always contained, proved a strong contrast with the radiant sonic torrents of the players from Huayin, an octet whose labeling as a “band” belies the complexity and history of their musical practice. For three centuries, this ensemble was purely a family concern — only men with the surname Zhang could join.

The program alternated Wu’s polished pipa solos and the Shadow Puppet Band’s exuberant songs. Wu opened with Flute and drum music at sunset, a composition in the lyrical style, and the martial Ambush from Ten Sides. In the former, Wu introduced a number of techniques that recurred across pieces: a rapid repetition of the same note using all five fingers of the right hand, the sweeping and plucking of damped strings, and the strategic use of string harmonics as a gesture of closure. While the first piece consisted of beautiful tracings on a backdrop of silence, the second was a virtuoso showpiece featuring constant activity, including the bending of entire chords downward in pitch. 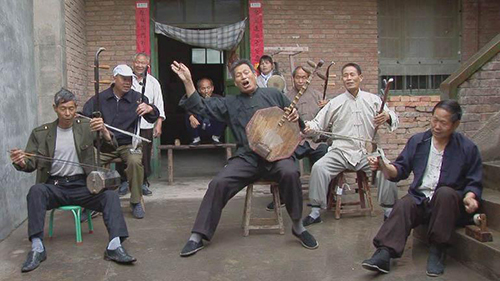 The Band’s performances of Ancient Song of the Guanzhong Plain, Round Sun and Crescent Moon in the Heavens, and A Bright Pearl in the Sea resist easy description. Group leader Zhang Ximin sang in a startlingly high tenor, his bandmates singing and shouting in reply. The group’s instrumental forces ranged from erhu and gongs to a resonant wooden bench. Zhang Ximin also served as a percussionist, playing while seated on the edge of the stage. As tightly coordinated as one would expect an intergenerational band of family and friends to be, these players produced hyperactive music and had fun doing it. Three Heroes Do Battle with Lü Bu found them assembled around a screen, behind which they manipulated shadow puppets in a reenactment of a legendary conflict. Wu improvised music to a second puppet play in a rare moment of convergence between styles.

The Band’s instrumental Shiyang Jing featured a glorious wash of gongs, and The Da Han Song found the bench player in the unexpected role of conductor. Confessing that she “has to show off,” Wu provided two sublime, sophisticated moments of respite from the sheer energy of the Band — the captivating Dance of Yi and Three and Six — before the Band came back for a lively finale, The General’s Orders Stir the Mountains and Rivers.

END_OF_DOCUMENT_TOKEN_TO_BE_REPLACED

Then, you heard all the qualities that make for a stunning soloist. Winner of the 2013 Cleveland International Piano Competition, Khristenko was back in town this month for a recital in Piano Cleveland’s summer series, Piano Days @CLE. And he couldn’t help but revel in the spotlight a little, even as he settled into a more collaborative role at the keyboard for his program, “Stanislav and Friends.” END_OF_DOCUMENT_TOKEN_TO_BE_REPLACED

Now, both pieces on Saturday might be called one thing, but they really sound like another. “Symphony” is a title that would fit Sergei Rachmaninoff’s Piano Concerto No. 2, as well as John Adams’ modern masterpiece for orchestra, Harmonielehre. END_OF_DOCUMENT_TOKEN_TO_BE_REPLACED

And the Orpheus effect has everything to do with who’s not onstage. The New York City-based group has rehearsed and performed without a conductor since its founding in 1972, and this means its members share the musical authority that typically rests with one person. Multiplied by a dozen or so, the interpretation of a piece suddenly emanates from every player, from the concertmaster to the double bass, resonating with a kind of collective power. END_OF_DOCUMENT_TOKEN_TO_BE_REPLACED