There are two varieties of concert Requiems — the comforting, consoling type (Brahms, Fauré, Duruflé) and the fiery Day of Judgment kind (Mozart, Berlioz, Verdi). The Akron Symphony chose one of the latter to close its season on Saturday, May 5. Led by music director Christopher Wilkins, the Akron Symphony Chorus and the Masterworks Chorale of the Summit Choral Society joined the Orchestra in Verdi’s Requiem, a thrilling choral conflagration that lit up E.J. Thomas Hall.

Written in 1874 as a tribute to Alessandro Manzoni, Verdi’s is a gripping operatic work that requires equal measures of drama from orchestra, soloists, and chorus. The Akron Symphony was in fine form, and the combined chorus — prepared by Akron Symphony Chorus Director Marie Bucoy-Calavan — sang with bold authority in the work’s many tuttis and floated Verdi’s gauzier, more introspective textures with sureness of pitch and excellent blend.

The chorus was equally impressive in the “Sanctus” and “Libera me” fugues — elements that show Verdi’s acumen in counterpoint as well as in grand operatic gestures, and that foreshadow the fugue in the last act of his final opera, Falstaff.

Lest anyone forget that the main subject of his Requiem is the Last Judgment, Verdi brings the beginning of the “Dies irae” around several times, and the thunder produced by dual bass drums makes each repetition just as jarring as the last. Antiphonal trumpet calls from the balcony added a spatial dimension — an extra theatrical effect — to the fanfares of the onstage brass. 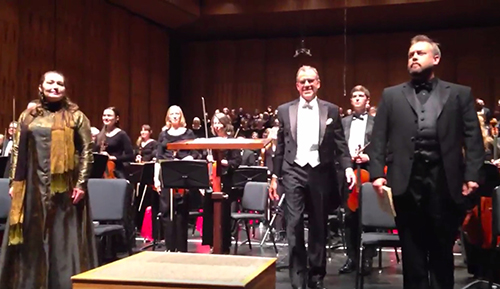 If the solo quartet had collectively measured up to the quality of the orchestra and chorus, this performance would have been completely breathtaking. Soprano Dina Kuznetsova was strong and clear of voice, and consistently dependable from bottom to top of her range. Her solo with unaccompanied chorus in the “Libera me” was a special moment. Mezzo-soprano Nancy Maultsby sang with an arresting sense of drama and splendid musicianship, but the tessitura of Verdi’s vocal lines lay a bit too high to show her off to best effect.

Tenor John Pickle sang with handsome tone through most of his range, but sounded stressed when he moved into his upper register. Bass Adam Ciofarri — really more of a baritone — needed more vocal power to support his colleagues. At one point late in the piece, the solo quartet ventured into some interesting harmonies of its own invention.

Wisely, Christopher Wilkins let Verdi’s Requiem stand alone on the program — it needs no companion piece. His beautifully-shaped, well-paced performance was surely a highlight of the Akron Symphony season. The impact that the combined Akron Symphony Chorus and Masterworks Chorale made on Saturday promises fine choral and orchestra programs in seasons to come.

END_OF_DOCUMENT_TOKEN_TO_BE_REPLACED

Rodgers & Hammerstein’s Cinderella was originally produced for television in 1957 — seven years after the animated Disney film was released — and starred Julie Andrews. According to the Rodgers & Hammerstein website, it was viewed by over 100 million people. END_OF_DOCUMENT_TOKEN_TO_BE_REPLACED

The story line has its origin in an 1855 play and an 1842 farce that Thornton Wilder mined for his 1938 play The Merchant of Yonkers. When that turned out to be a flop, in 1954 Wilder made the crucial decision to re-center the show around the character of the legendary marriage broker Dolly Gallagher Levi and renamed it The Matchmaker. END_OF_DOCUMENT_TOKEN_TO_BE_REPLACED

The Dodero Center for the Performing Arts at the Gilmore Academy in Gates Mills is one feature of an impressive campus. The auditorium is shallow, the stage is deep, and the ensemble played without a shell. Throughout the program, the sound, especially in instruments’ lower registers, tended to disappear. END_OF_DOCUMENT_TOKEN_TO_BE_REPLACED