On the flip side of the program is a compilation of excerpts from three of the four Ring Cycle operas, played in sequence and chosen by Wilkins himself. Among those selections is “The Ride of the Valkyries,” leading into the grand finale of the Cycle: Brünnhilde’s immolation scene, featuring guest soprano Elisabeth Rosenberg. Wilkins will discuss the program during the pre-concert talk at 7:00 pm, and tickets are available online.

According to Wilkins, this grouping of Wagner excerpts has never been previously performed. “It’s wonderful when a concert is also a unique and unrepeatable event,” he said during the video. “These to me are highlights from the Ring that show the orchestra to spectacular advantage, and moments that are especially vivid in terms of the drama.”

I got in touch with Wilkins over the phone and began by asking him what he finds to be key to a performance of the Wagner excerpts. “These massive structures he created need to breathe,” he said. “They need space — the beauty needs an opportunity to blossom. But they also need animation. You have to keep them thrusting forward a bit, and that’s a delicate balance.”

He finds something similar to be true about programming. “You can overstuff a program with so many beautiful moments that it lacks propulsion. I thought about that when I put the Ring excerpts together. One decision I made was not to include a good portion of the ending of Götterdämmerung where the soprano doesn’t sing. We have a great young vocalist in Elisabeth Rosenberg, and we’re going to do the entire immolation scene. But once you’ve made that choice, you need to get to that scene with the audience still pretty fresh.”

The conductor pointed out the extensive use of supertitles in store for the Wagner — not just translations of the vocal lines, but also descriptions of the action. “So as we’re moving into Nibelheim and you hear the pounding of the hammers, or as we’re crossing the rainbow bridge to Valhalla, it’ll be very clear what’s happening,” he said.

What’s it like to hand the reins of your orchestra over to another conductor for parts of a concert? “One thing that’s very nice — and that doesn’t happen all that often for conductors — is to be able to hear the orchestra in rehearsal and performance out in the hall,” Wilkins said. 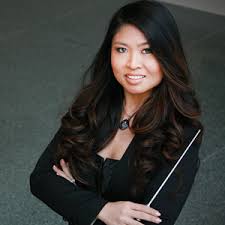 It also gives him an opportunity for take on more of a mentorship role. “Staff conductors like Marie tend to be young, so I can share my perspective, offer some feedback, and also advocate for her really knowledgeably, with first-hand experience. I also think it’s interesting for the orchestra not to always play in limited-rehearsal or limited-repertoire situations under the staff conductor, but under the best circumstances.”

He called Bucoy-Calavan a great talent. “She does a fantastic job both with the University and with our Chorus, and I’m excited to hear what she brings to the program. It’ll be something different from what I would have brought to it, which I think is a positive.”

We closed our conversation discussing current trends in programming. “I think orchestras are more excited about living composers,” Wilkins said. “Our big institutions are getting into it in a way that feels different from the past. It feels now like we’re engaging with new music because it’s the music of our time. It’s relevant and exciting, and much of it is a whole lot hipper than anything else we have to play.”

Wilkins was recently thrilled seeing Nico Muhly’s 2017 Marnie at the Metropolitan Opera. “I also just saw an opera written and conducted by Ted Hearne with a very eclectic blend of styles,” he said. “It takes orchestras in a direction that’s exciting and more relatable for a lot of people.”

But new directions don’t always make a piece idiomatic for orchestra. “There are a lot of challenges to bringing in styles that are foreign to your tradition and making them work. But there are plenty of composers who know how to do that, beginning with John Adams and up to lots of people writing today.”