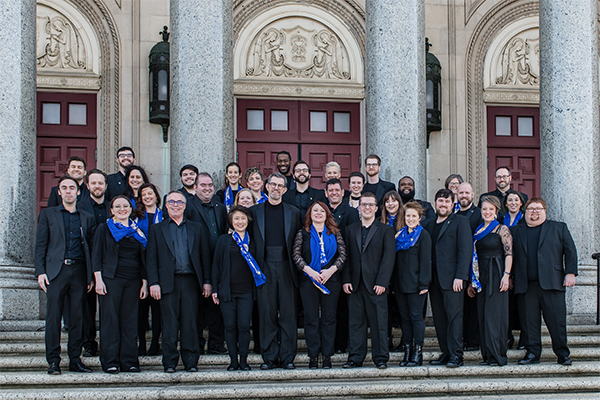 In a recent telephone conversation, Oberlin Conservatory musicology professor Charles Edward McGuire, who will give pre-concert lectures 45 minutes before each performance, revealed the thought process that led to the choice of repertory for these concerts by MacPherson’s professional singers.

“The concept was really planned around Kent State composition professor Adam Robert’s work, Book of Doubt/Book of Faith.” Written for 16-part choir, viola and percussion, the piece sets secular, feminist ‘psalms’ by poet Claire Schwartz relevant to our time and connected to Jewish history, as well as music by composers who have historically been excluded from the world of classical music.

“There’re all sorts of interesting environmental images within Adam’s piece that Scott wanted to capitalize on for the rest of the program,” McGuire said. “I know that he really wanted to program Spanish-born, Venezuelan composer Alberto Grau’s Kasar mie la gaji (“The earth is tired”). Then suddenly a lot of other ideas came through.”

“Dale Trumbore’s After the Storm Passes, made a great deal of sense. And then Eliza Gilkyson’s Requiem in that fantastic arrangement by Craig Hella Johnson is also about environmental disaster and coming to terms with it. So everything just started to fit together.

McGuire noted that Saunder Choi’s American Breakfast, even though it’s not about ‘The Environment,’ describes the environment we live in where violence is always possible. Choi wrote it to commemorate the deaths of 49 people and wounding of 53 others at the Pulse Nightclub in Los Angeles on June 12, 2016. (The first movement, ‘semi-automatic,’ hints at the subject, and there are quotations from the user’s manual for the AR-15.)

Adam Roberts’ Book of Doubt / Book of Faith at the core of the program, ‘celebrates the resilience of the human spirit,’ focusing on ‘the large questions of our time (gun violence, environmental destruction and disaster, identity of the self within society, and what we will accept as normal instead of exceptional), counterpointing these ideas with our will to have faith.’

As McGuire will tell the preview audiences this weekend, ‘in order to come to a sense of consolation, Scott bookended the program with two Alleluias, one from 1979 by Eurydice V. Osterman, one from William Walker’s Heavenly Home.

“I know the word resilience is overused, but it’s right,” McGuire said. ‘The idea is that there are some serious issues that we have to deal with, but there are also points of great beauty that we can use to contrast with the things that are difficult. So between those two pieces comes the idea that there are places of solace, there are places to recharge and places where we can gather the strength that we need to fight the fight.

“That’s the kind of thing you don’t find in the program notes,” McGuire said, “because you can’t write about that very easily. I’ll go into that theme a little bit in the introduction to the 20-minute talk that I’m doing before both concerts.”

“We always raise money for a local charity, which this year is going to the Ohio Coalition Against Gun Violence because of all of the things that had happened in between the war in Ukraine and the mass shootings that we’ve had in the last three weeks in the United States of America.” McGuire said. “It just seemed an apropos time to bring that to light as well.”

Supported by engagingly, yet simple staging by Cara Consilvio, a well-prepared cast of singers told the archetypal story of Cinderella with charm and flair. Framing the production was  a sparse but colorful set and wonderful lighting by Dave Brooks. END_OF_DOCUMENT_TOKEN_TO_BE_REPLACED

END_OF_DOCUMENT_TOKEN_TO_BE_REPLACED

The music isn’t easy to play, either. Over the course of two hours, all of the musicians brought fantastic focus to the unrelenting tricky rhythms and countless layers of parts, all of which require a high level of individual responsibility. Even in the moments of calm, the accompaniment remains perpetually unsettled. Adams — who made a sprightly presence on the podium — combines minimalist, repeating motives in gradual layers, which eventually become so dense they overwhelm the senses. Lisa Wong deserves special mention for her thorough preparation of the Cleveland Orchestra Chorus, as does Jennifer Rozsa for the Children’s Chorus, which made a brief but memorable appearance in the last few minutes. END_OF_DOCUMENT_TOKEN_TO_BE_REPLACED