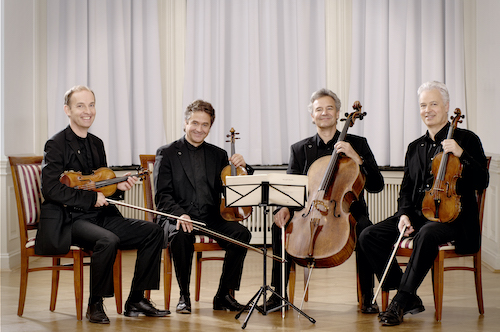 At 5:00, the Imani Winds will give a free guest presentation and Q&A at Oberlin Conservatory’s Warner Concert Hall, a precursor to their performance tomorrow on the Cleveland Chamber Music Society series.

And at 7:30, the Rocky River Chamber Music Society presents the Auryn String Quartet  in works by Haydn, Beethoven, and Mendelssohn as the German ensemble winds down after 40 years. It’s free in person at Lakewood Congregational Church or via live stream.  Read a preview article here.

As Vinay Parameswaran, now the associate conductor of The Cleveland Orchestra, told me a couple of years ago, his favorite moments with the Orchestra have been seeing music director Franz Welser-Möst conduct opera: Janáček’s The Cunning Little Vixen in 2017, Wagner’s Tristan und Isolde in 2018, and Richard Strauss’s Ariadne auf Naxos in 2019 (photo by Roger Mastroianni below).

“He’s one of the greatest opera conductors in the world,” Parameswaran said. “Tristan was revelatory. The way he was able to shape it, capture the drama, and give the singers exactly what they needed, he just made it look so effortless. And then of course this season with Ariadne — it’s some of the most beautiful music Strauss wrote, and we had an A+ cast. I think I’ll remember that long past my time here in Cleveland.” 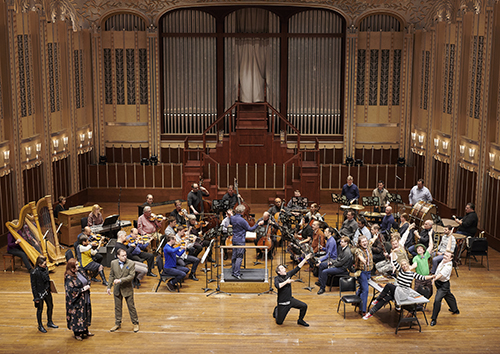 On that note, let’s revisit the strange history of that Strauss work, which had its revised version — the more popular one, and the one that The Cleveland Orchestra performed — premiere on this date in 1916 at the Vienna Opera.

Before that, in its original form, Ariadne auf Naxos was part of a six-hour package deal. The majority of that duration was taken up by librettist Hugo von Hofmannsthal’s adaptation of the Molière play Le Bourgeois gentilhomme, including incidental music by Strauss. Only at the end came the opera, replacing the Turkish ceremony that concludes the play: here, the foolish Monsieur Jourdain calls for an after-dinner performance of Ariadne auf Naxos, and the opera thus begins.

A complicated, even clever idea, especially given that Le Bourgeois gentilhomme was from the start a hybrid of multiple art forms: a comédie-ballet, or a play containing interludes of music and dance.

But at the premiere in 1912 in Stuttgart, the audience was not thrilled. “It was a fiasco, as could easily have been predicted,” critic and Strauss scholar Michael Kennedy writes, going on to quote the composer:

‘The play-going public felt it did not get its money’s worth,’ said Strauss, ‘while the opera public did not know what to make of Molière.’

And because it necessitated both a company of actors and an opera company, it was also impractical and expensive to put on.

As the proverb goes, failure is the mother of success. Hofmannsthal suggested that the Moliere adaptation be replaced by a much shorter prologue, one that cleverly sets the stage for the collision of genres that follows in the one-act opera. Strauss was not in a rush to make that happen, but after nearly five years, he did.

In his review from 2019, Daniel Hathaway provides a quick summary of the complicated plot, and more importantly describes the music and the performance, from Strauss’s superb score “full of ravishing melody, enchanting harmonic progressions, enthralling textures, and beguiling solo moments” to Welser-Möst’s “supple, expertly paced performance brilliantly played by The Cleveland Orchestra.”

It’s nice that such an evening lives on not only in the memories of those who  experienced it, but that it can also take on a new life in print via review. Of course, that can’t replace the experience itself — nor can a recording. Nevertheless, enjoy an excellent rendition of the most famous aria from the opera, Großmächtige Prinzessin (“High and mighty princess”), performed here at Aix-en-Provence in 2018, with Sabine Devieilhe singing the role of Zerbinetta.

It’s interesting to note that the first version of Ariadne auf Naxos is indeed occasionally staged, including in 2012 at the Salzburg Festival. Perhaps, assuming some cuts to the six-hour timeframe, audiences today are more receptive to experiencing two different genres of theater in the same evening?

The Cleveland Orchestra’s second performance of the new season on Sunday afternoon, October 17 at the newly renamed Mandel Hall at Severance Music Center was just such an occasion. If the ensemble’s return to public concerts under the baton of Franz Welser-Möst wasn’t enough reason to light a bonfire, the Cleveland debut of a new work written for one of the Orchestra’s most popular soloists, and the swan song of one of its longest-serving members added extra fuel to the celebration. END_OF_DOCUMENT_TOKEN_TO_BE_REPLACED

Cleverly, CityMusic’s latest concert led listeners through these changes one step at a time. “Musical Matrix” took transformation as its theme, and each piece on the October 2 program at the Maltz Performing Arts Center (the second of two performances) put its spin on the subject. END_OF_DOCUMENT_TOKEN_TO_BE_REPLACED