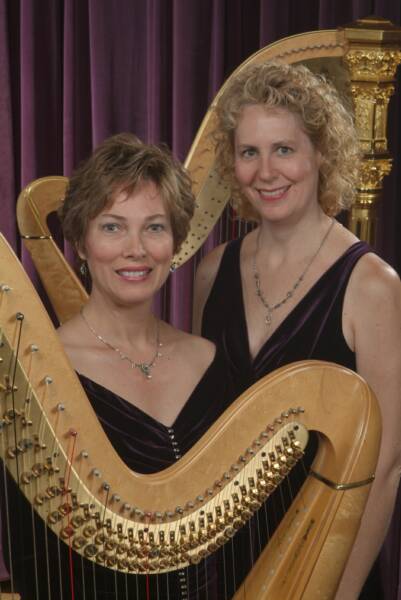 Turn the light on in both sides of your brain with an intriguing mix of concerts and discussions happening from noon to night. Topics and focuses include Shakespeare’s lesser-known collaborative side (Kronberg Academy), the possibilities of two harps in the hands of two principal players (Salzedo Duo / Trinity Cathedral), peace in the Middle East through music (West-Eastern Divan Orchestra / Carnegie Hall), the array of ensembles that make up a school of music (University of Akron), and finally, the dual concept of home as both a source of comfort and the “call home” of death (multi-instrumentalists Rhiannon Giddens and Francesco Turrisi / Carnegie Hall). See our Concert Listings for details.

In honor of Iowa-born, Grammy-winning, University of Michigan faculty composer Michael Daugherty’s 67th birthday, let’s look back on some memorable performances of his music in the area. We can begin in December of 2015, when Liza Grossman and the Contemporary Youth Orchestra gave the Cleveland premiere — as well as the first performance by a youth orchestra — of all five movements of the Superman-inspired Metropolis Symphony.

Mike Telin gave a sense of the work’s stylistic variety, as well as its excellent performance, in a review:

Throughout the 40-minute piece, Daugherty brilliantly interweaves scatterings of jazz, rock, funk, and avant-garde with the symphonic.…Grossman led the young musicians in a first-rate performance of the demanding work.

(As a side note, musical variety and pop-culture influence were present in the composer’s life from the beginning: his dad was a jazz and country-music drummer, his mom was an amateur singer, and his grandma played piano for silent films.)

In the review, Telin walks us through the landscape of “Lex,” “Krypton,” “MXYZPTLK,” “Oh Lois!” and “Red Cape Tango” before noting the audience’s clear appreciation, including that of the composer himself, who was present. Too bad we can’t go back in time to revisit that performance, but here’s a worthy substitute on YouTube from the Toledo Symphony under the direction of Alain Trudel.

Grossman, the founder of CYO and its music director for a quarter century up until her departure last year, has a clear affinity for Daugherty’s music. As she told Telin in a 2018 conversation,

I love Michael’s work — it’s Americana, understandable, and well-written for orchestra. I think that whether an audience member has heard his music before or not, they will walk out feeling as if they understood what he was saying. I think that it brings happy memories to people.

On that occasion, she and the orchestra were gearing up to present Daugherty’s Route 66, which she said conjures up the idea of driving down the highway, wind in your hair. There aren’t any local recordings, but you can’t go wrong with Marin Alsop, who leads the Bournemouth Symphony in that musical road trip here.

Daugherty’s list of compositions is long and full of highlights, but one that can’t be overlooked is Dead Elvis for bassoon and ensemble. Here’s a Rice University student performance (parts one and two) from 2010 by TK DeWitt (who three years later joined the Kansas City Symphony). The music doesn’t start until a minute in, but don’t miss his entrance — in costume, of course — or the delivery of his bassoon from offstage.

Another musical luminary to celebrate today is János Starker, the famed Hungarian-American cellist, who died on this date in 2013. For 57 of his 88 years on earth, he taught at Indiana University, which brings up one Ohio connection: it’s there that he mentored now-Cleveland Orchestra principal cello Mark Kosower (during which time Kosower got his first taste of the music of Ginastera, as he told Daniel Hathaway in 2016).

Enjoy Starker’s 1988 recital performance (location not specified) of two unaccompanied cello suites — one by Bach, one by Gaspar Cassadó — plus Kodály’s solo sonata. Then listen to his 1980 appearance at Blossom Music Festival, where he joined Eduardo Mata and The Cleveland Orchestra in Bloch’s Schelomo: Rhapsodie Hébraïque.