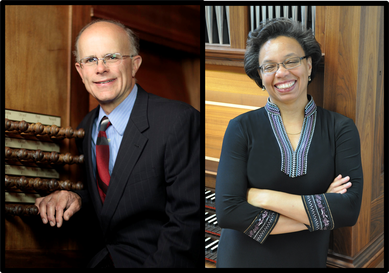 The afternoon opens with a Trinity Brownbag “Organ Spectacular” at 12 pm, with Todd Wilson and Nicole Keller (above) unveiling Trinity Cathedral’s new Muller Pipe organ through music by Sowerby, Hampton, Widor, Lemare, Shearing, and Soler (attend in person or via stream). And at 12:15, there’s a Dana School of Music Voice Area Recital at YSU’s Butler Institute of American Art.

The evening pairs string quartets and visual art when four CIM ensembles play works by Beethoven, Brahms, and Haydn in “Music in the Galleries” at the Cleveland Museum of Art.

Last Thursday, Mike Telin rounded up several reviews of the Metropolitan Opera’s production of Terence Blanchard’s Fire Shut Up in My Bones, the first opera by a Black composer ever to be staged by the company.

Following up on the review by chief classical critic Anthony Tommasini, The New York Times has since sent two more critics to see the production — one specializing in classical music, the other in jazz (Blanchard is a jazz trumpeter as well as a composer). Read the post-opera discussion between Seth Colter Walls and Giovanni Russonello here.

Elsewhere in NYC, the New York Philharmonic is managing the challenge of being without a home venue this season during the renovation of David Geffen Hall. “This 2021-2022 season is shaping up as a militarylike exercise of logistics, dexterity and scheduling,” writes Adam Nagourney in the Times.

Here are the numbers: “For each move, over the course of 86 concerts in four main locations, six crew members will have to pack up to 30 cases of instruments and equipment and load them into a 24-foot-long truck for hauls that will range from five blocks (from Tully to the Rose) to three miles (Riverside Church) and later in the season to its old home, Carnegie Hall.”

And you thought you were having a hard day. 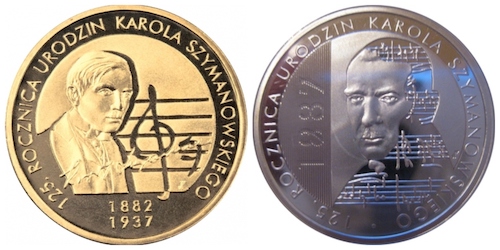 On this date in 1882 in the village of Tymoszówka, now in Ukraine, one of the great Polish composers was born: Karol Szymanowski. Beloved in his home country, he has received a slew of state honors, both during his life and after it.

Among the more fun facts in that arena, a whole year was given to his name thanks to a resolution by the Polish Parliament: 2007 was decreed “The Year of Karol Szymanowski” — it was the 125th anniversary of his birth. And later that year he reached truly rarefied air among composers: he appeared on commemorative currency, pictured above.

Many composers find their appeal among the public slackening towards the end of their life, only for it to spike at some point after their death. But outside of Poland, Szymanowski saw his greatest popularity in his last decades, the 1920s and ‘30s, when his music was performed by such figures as Artur Rubinstein, Robert Casadesus, and Leopold Stokowski. (He has also undergone a revival in recent decades, praised and recorded by Charles Dutoit and the Montreal Symphony Orchestra, and Simon Rattle and the Birmingham Symphony Orchestra.)

Perhaps one reason his music found lasting appeal even toward the end of his life is that it didn’t occupy a single style that eventually fell out of fashion, but rather evolved greatly over time. He moved from the early influence of the late German Romantics, to an impressionistic and somewhat atonal period, to his fascination with the folk music of the Polish Highlanders as part of an ambitious interest in creating a national style.

On that note, enjoy a set menu today (on the house, generously) containing one piece of music from each of those periods: the Étude Op. 4, No. 3, the First Violin Concerto, and the Fourth Symphony — in essence a piano concerto, for which he was soloist for the premiere.

The Cleveland Orchestra’s second performance of the new season on Sunday afternoon, October 17 at the newly renamed Mandel Hall at Severance Music Center was just such an occasion. If the ensemble’s return to public concerts under the baton of Franz Welser-Möst wasn’t enough reason to light a bonfire, the Cleveland debut of a new work written for one of the Orchestra’s most popular soloists, and the swan song of one of its longest-serving members added extra fuel to the celebration. END_OF_DOCUMENT_TOKEN_TO_BE_REPLACED

Cleverly, CityMusic’s latest concert led listeners through these changes one step at a time. “Musical Matrix” took transformation as its theme, and each piece on the October 2 program at the Maltz Performing Arts Center (the second of two performances) put its spin on the subject. END_OF_DOCUMENT_TOKEN_TO_BE_REPLACED