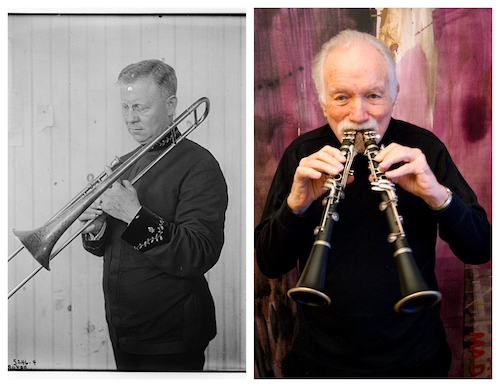 Robert Myers takes to the Beckerath organ at Trinity Lutheran in Cleveland at 12:15 pm for “Minor delights,” a program of music by Scheidemann, Boehm, and J.S. Bach (freewill offering).

And at 8, tune in to WCLV’s Ovations at 104.9 FM or online for a ChamberFest Cleveland program that brings together Beethoven, Dvořák, Hermann, Ali-Zadeh, Haber, The Beatles, and Diabate.

“Musicians, like professional athletes, have a single tool that allows them to perform —  their body. If it fails, they fail. But unlike in the world of professional sports, you can’t call ‘time out’ in the middle of a symphony.” Read on from Jim Farber’s article “Musicians Are Athletes, Too: The Physical Challenge of Being a Pro” in San Francisco Classical Voice.

Last year’s edition paid homage to Irving Berlin and Isaac Stern on the anniversary of their deaths in 1989 and 2001. Now we turn to a pair of performer-composers (pictured) who upped the ante in what the trombone and clarinet were capable of.

The ‘bone virtuoso in question is Arthur Pryor, who was a Sousa Band soloist, bandleader of his own, and prolific composer of band music — and later a politician — and who was born on this date in 1869 in Saint Joseph, Missouri.

His time serving on New Jersey’s Monmouth County Board of Chosen Freeholders (now the Board of County Commissioners) was brief — a single three-year term — but his career in music was not.

Beginning at age 22, he spent ten years with the Sousa Band, playing an estimated 10,000 solos. A particularly memorable solo performance came while the group was on tour, in front of all the German Army Band trombonists. After Pryor was done, they were so astonished by what they had heard that they almost didn’t believe it — they went so far as to take apart his instrument to see what “Yankee trick” it must have been hiding.

After the death of his father, Samuel Pryor, Arthur left the Sousa Band for the Pryor Band, where he took the helm for three decades. Six years into that tenure, the group settled in Asbury Park, New Jersey — hence his later foray into local politics there. 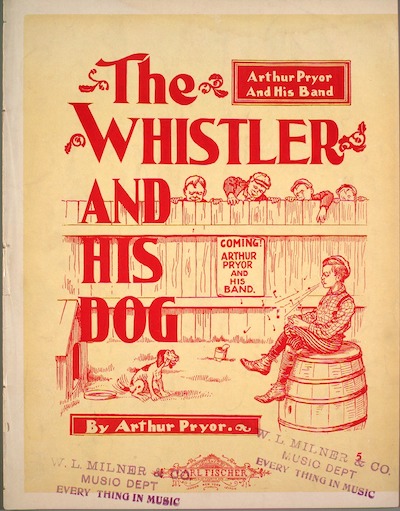 Pryor’s most famous composition is The Whistler and His Dog, apparently inspired by his boyhood pet bulldog Roxy. Listen to it — in all its piccolo-soloing, whistling, and dog-barking glory — in a 1913 recording by the Pryor Band here.

For a fun taste of Pryor’s own wildly virtuosic playing, listen to him solo with the Sousa Band in The Blue Bells of Scotland here — hearing the trombone in his hands, you’ll understand wanting to take that thing apart.

Moving further into the 20th century, we come to the late clarinetist and composer William O. Smith (a.k.a. Bill Smith, when the setting was jazz), born on this date in 1926 in Sacramento. Best-known for his collaborations with Dave Brubeck, he played an important part in developing the Third Stream style integrating elements of classical and jazz, as in his 1947 Schizophrenic Scherzo, composed for the Brubeck Octet.

He also made valuable contributions to the world of extended techniques, investigating and cataloging new possibilities of sound for the clarinet, and breaking new ground compositionally to feature those findings. Check out his 1963 Variants for Solo Clarinet for a tour of key vibrato, multiphonics, singing while playing, flutter tongue, and more.

Smith was active as a musician all the way into his final years before passing away in February of 2020 at age 93 from complications of prostate cancer. R.I.P.

END_OF_DOCUMENT_TOKEN_TO_BE_REPLACED

The Orpheus myth inspired French Baroque composers Jean-Philippe Rameau and Philippe Courbois to write expressive solo cantatas about the famous Greek musician-poet and his futile attempts — because of his own impatience — to rescue his beloved Eurydice from the grasp of Pluto in the Underworld. These are beautifully performed by the clear-voiced soprano Hannah De Priest and the velvet-throated baritone Jonathan Woody (who makes a walk-on appearance in the Rameau). END_OF_DOCUMENT_TOKEN_TO_BE_REPLACED

Now that live concerts are beginning to proliferate, it was delightful to hear Oberlin cello professor Darrett Adkins ring a change on the solo suite format with his Hypersuite No. 3 on September 28 in the Cirigliano Studio Theatre at Lorain County Community College. His program opened the new season of Signature Series performances in Elyria, and was dedicated to the memory of Eva Hornyak. END_OF_DOCUMENT_TOKEN_TO_BE_REPLACED