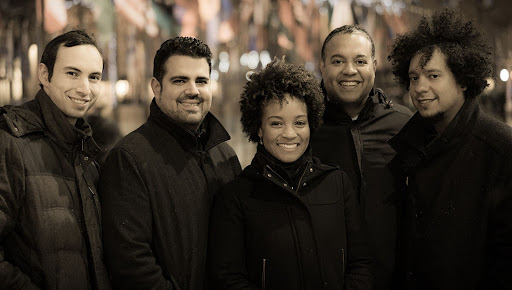 Among the wide-ranging works of pianist and composer Aldo López-Gavilán is one that was inspired by the relationship between him and his brother, violinist and Harlem Quartet founder Ilmar López-Gavilán.

As Ilmar said during a recent telephone call, “This piece speaks to the moments that we did not have together.”

As a prelude to the concert, Tuesday Musical is collaborating with Akron’s Nightlight Cinema for screenings of Los Hermanos / The Brothers on Monday, February 28 at 3:00 pm and 7:00 pm. (Tickets are still available for the matinee.) The documentary is about their shared childhood, their separation as a result of geopolitics — Ilmar lives in the U.S., Aldo in Cuba — their reunion, and their subsequent performances across America.

Directed by Marcia Jarmel and Ken Schneider, it includes a score by Aldo, footage of him performing with the Harlem, and appearances by other musicians such as violinist Joshua Bell. 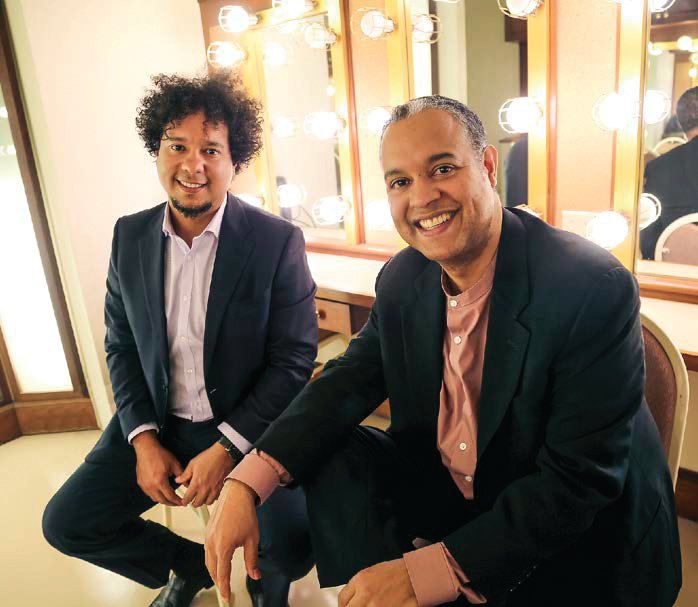 I began my conversation with Ilmar by asking him what might sound like a simple question: how would he describe Aldo’s compositions? If you listen to just a few of his five works on this program — Viernes de Ciudad, Talking to the Universe, Eclipse, Aegean Dream, and Pan con Timba — you’ll know that’s not so easy to answer.

The violinist noted the “tapestry of classical influences” at play. “I hear a lot of Ravel in his music, and Schumann.” Hence the pairing with that composer’s Quintet. “And Russian composers like Prokofiev and Rachmaninoff. All of that together with his obvious Cuban background — that Afro-Cuban rhythmic essence is always there somewhere.”

All of those influences make for a diverse experience from one piece to the next. “In an all-Beethoven program, there is a sound that you can’t confuse — it’s just Beethoven,” Ilmar said. “Some people say that you need variety in a concert, so maybe you shouldn’t have just one composer, and I totally agree. But somehow with Aldo’s music, the sonority is so different among pieces that it doesn’t sound like one composer the whole time, which is fun.”

It makes sense that Eclipse, the piece Aldo wrote about himself and Ilmar, is very personal. “It’s almost like a love letter — like something that the audience should not be reading, but since it became music, we get to share it. That’s how intimate I think this piece is.”

Warmth and affection aside, Ilmar said he and Aldo have plenty of brotherly moments as well. The composer always welcomes input on his pieces from the Harlem, especially since he’s not a string player. But Ilmar can be a bit bold when making suggestions. “Sometimes I’ll just say, ‘I think you should change it to that,’ maybe with dynamics or not doing a repeat. And if he wasn’t my brother, I might be more careful — if he were Chick Corea, I would bite my tongue.”

Of course, biological isn’t the only kind of family. “This will be my brother playing with my extended family,” Ilmar said of his quartet-mates: violinist Melissa White, violist Jaime Amador, and cellist Felix Umansky. “And they have a rapport which is beautiful to watch — the camaraderie and the jokes.”

Speaking of family, one scene in the documentary contains emotions that should be relatable to anyone who’s ever navigated the logistics of a flight home: confusion and frustration with your loved ones.

In this instance, Aldo was coming to pick up Ilmar at the airport, but somehow they missed each other, and the violinist and his kids ended up grabbing a taxi. “The directors left all of that in,” Ilmar said. “Me arriving home and nobody’s there, Aldo getting mad waiting for me — it’s one of my favorite scenes, actually.”

Being the subject of a documentary has its downsides. Asked about that experience, Ilmar responded without hesitation: “It was very intrusive.”

That included allowing access to family photos, sharing painful memories, having family-get-togethers with cameras watching, and going on lengthy drives documented via microphone. “We didn’t know why they needed five hours of our internal conversations,” Ilmar said. “It was kind of prying.”

Still, the directors and the brothers alike have been pleased with the final product, which has been well-acclaimed and widely screened, from film festivals to PBS.

And on a personal level, there was one definite upside. “People have family photos and make sure to save them, but here it’s that on steroids.” The filmmakers needed to digitize old pictures, cassettes, and other media, some so delicate that they needed to apply for a grant and have materials sent to a lab.

“That’s something we never would have preserved,” Ilmar said. “Now we can pass it down to our kids — so that to me was worth all of the intrusion.”

Jackson began the program with a recitation of Langston Hughes’ poem “Helen Keller” — the first of five poems by Hughes that served as interludes between each piece on the first half. END_OF_DOCUMENT_TOKEN_TO_BE_REPLACED

Pianos with pins and tape on strings, a bass drum and tam tam, crotales, Almglocken, and vibes. Microphones were hooked up all around the instruments. The feed was sent to speakers around the room. Lighting designer Nicholas Houfek hung incandescent globes over the arrangement of instruments from thin black wires stretching across the beams. END_OF_DOCUMENT_TOKEN_TO_BE_REPLACED

From the podium, Elim Chan set an ambitious tone for the evening. The rising star conductor, here in her Cleveland Orchestra debut, has a commanding style, and every twist and turn in Saturday’s performance tracked closely with her baton. END_OF_DOCUMENT_TOKEN_TO_BE_REPLACED