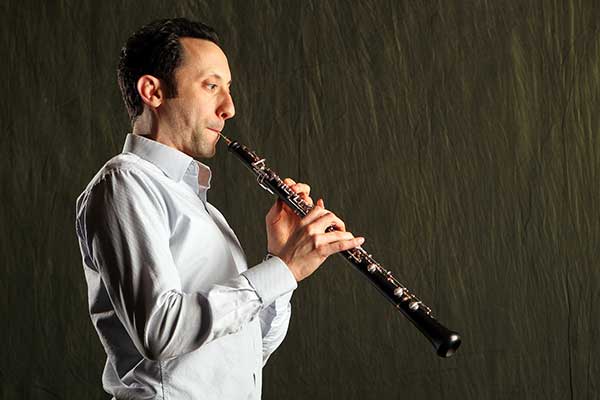 “We don’t discuss much when we’re playing in orchestra,” Cleveland Orchestra principal oboe Frank Rosenwein said in an interview this week. “It’s funny, there’s opportunity to point something out if anything is amiss — you can say, ‘Oh, can we go over this or that’ — but essentially, it’s a silent collaboration. In chamber music, however, we have the luxury of getting together and discussing things, and teasing out people’s individual personalities and musical concepts.”

The evening will begin with Shapes for Bassoon and Piano, a new work by assistant principal oboe Jeffrey Rathbun. Leonard Bernstein’s Clarinet Sonata and Erwin Schulhoff’s Divertimento for Oboe, Clarinet, and Bassoon round out the first half, and the second presents Beethoven’s Trio for Two Oboes and English Horn in C and his Sextet for Two Clarinets, Two Bassoons and Two Horns in E-flat.

“The program was conceived by Barry Stees,” Rosenwein said, “and he came up with the idea of two contrasting halves — the first, which is more avant-garde, and the second, which is all Beethoven.” I got to talk to Stees this week as well, and he said that the heart of the program is built around a core component of the Kent Blossom festival: side-by-side performance of students and faculty.

“We like to find a piece we can play together so that we aren’t only mentoring students behind the scenes, but also on stage in performance,” Stees said. “The two Beethoven pieces anchor the program, and each faculty member will play with a student or two.”

“Jeff Rathbun is a fantastic composer, and he and Barry are great friends,” Rosenwein said, “and so the new piece he wrote for Barry should be a great opener.” Shapes was written for Stees this past spring, and he premiered it in late April as part of the Chagrin Arts Series. “This will be the second performance of the piece,” Stees said, “and I think it’s going to be a good time.”

While Bernstein’s Clarinet Sonata is a crowd-pleasing staple, Schulhoff’s Divertimento is considerably lesser known. “He was a German composer who was singled out from that whole crowd of painters, sculptors, and musicians who were deemed degenerate by the Nazis,” Stees said. “A lot of these artists perished in concentration camps, which is the case with Schulhoff. It’s our little good deed to keep pieces by those composers alive in the public eye.”

Rosenwein agrees that Schulhoff’s piece deserves to be heard more often. “It’s humorous, it’s deep, and it’s modern in certain ways, but it’s also lighthearted and cheeky. Schulhoff pulls from all kinds of genres. There’s jazz in there, there’s Hindemith, there’s bits of Stravinsky, and all of it is wrapped into a unique and personal voice,” he said, taking out his sheet music to walk me through the score. “It has a movement titled “Florida,” whatever that means. I don’t know if Schulhoff ever traveled to Florida, but it does have a breezy, island quality to it.”

Wednesday’s concert is the fourth installment of KBMF’s Faculty Concert Series, which concludes the following week with the Kalichstein-Laredo-Robinson Trio. “This is a very loyal series,” Stees said. “It fills a really nice niche in the summer arts scene down in Kent.” Both musicians agree that the Festival as a whole is on the rise. “I’ve been teaching here for over a decade, and the quality of the student playing has only increased,” Rosenwein said. “The level of their dedication, and the spirit they bring to working together — it’s immensely impressive.”

Jackson began the program with a recitation of Langston Hughes’ poem “Helen Keller” — the first of five poems by Hughes that served as interludes between each piece on the first half. END_OF_DOCUMENT_TOKEN_TO_BE_REPLACED

Pianos with pins and tape on strings, a bass drum and tam tam, crotales, Almglocken, and vibes. Microphones were hooked up all around the instruments. The feed was sent to speakers around the room. Lighting designer Nicholas Houfek hung incandescent globes over the arrangement of instruments from thin black wires stretching across the beams. END_OF_DOCUMENT_TOKEN_TO_BE_REPLACED

From the podium, Elim Chan set an ambitious tone for the evening. The rising star conductor, here in her Cleveland Orchestra debut, has a commanding style, and every twist and turn in Saturday’s performance tracked closely with her baton. END_OF_DOCUMENT_TOKEN_TO_BE_REPLACED