“Marriage: Inside Out,” the ambitious program in Wright-Curtis Theater on Saturday, November 17, began with the third act of Mozart’s The Marriage of Figaro — the point where da Ponte’s plot becomes complicated and lots of bodies come into play. 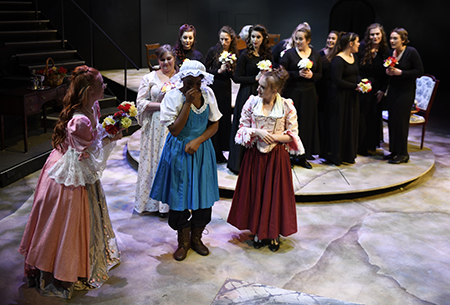 Anna Hylton, Abigail Kraeer, Sara Poff, and Racquel Ritchie made up a delightful quartet of peasant girls, costumed — as were the rest of the cast — by members of the all-student production staff.

As a nice touch, recitatives were sung in English, arias and ensembles in Italian. 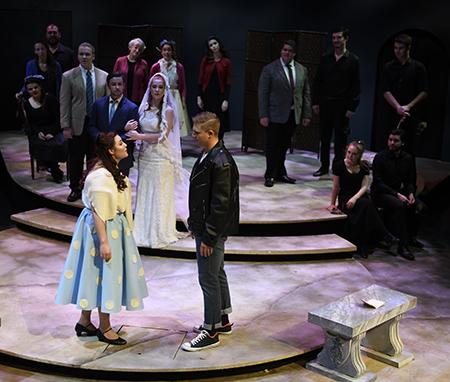 Figaro segued directly into scenes from Act II of Berlioz’ Béatrice et Bénédict, based on Shakespeare’s Much Ado About Nothing. Connecting those excerpts was spoken dialogue from the play extracted by Berg. There was a funny transition from play to opera when the stage crew took the hook to a grandstanding actor by cutting the lights.

Act II involves the machinations of friends of Béatrice and Bénédict to get the two to admit they love each other (a fact they ultimately discover during the wedding of Claudio and Héro).

A quick costume change brought Marley Liebermann, the Countess in Figaro, back as Héro, and Henry Hantak (formerly Bartolo) back as the Sicilian general Don Pédro. The soon-to-be-married couple who don’t know it yet were the strong soprano Teagan Amey as Béatrice, and the resonant tenor Benjamin Hayes as Bénédict. (Hayes appeared in a motorcycle jacket and rolled-up jeans, as though he had wandered in from Happy Days.) 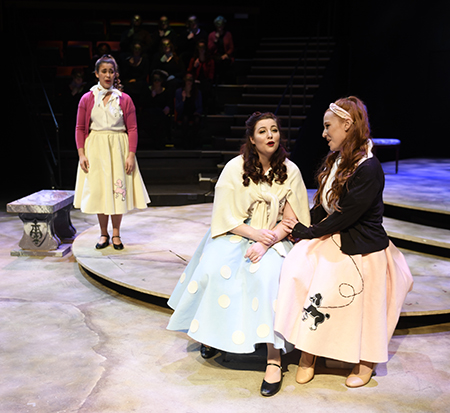 Natalie Butchko (Ursula), Jesse Reed (Leonato), and Brian Hirsch (Claudio) completed the principals. Musically, the act revolved around a lovely trio by the women, and of course, it ended with a wedding whose processions moved up and down the aisles of the theater. 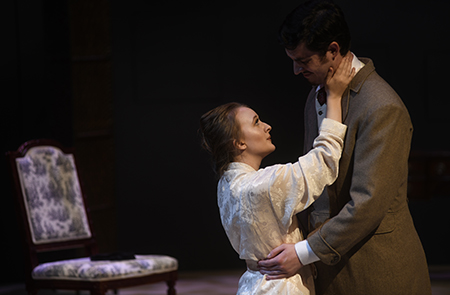 The Story of an Hour — the opera — began when librettist Tim Tibbits suggested Kate Chopin’s 1894 short story to composer Scott Little as a possible subject. The plot involves Louise Mallard, a married woman who feels stifled by her subordinate role to her husband Brentley, and is plagued with a weak heart besides. To tell the whole story is to give away its surprise ending, but suffice to say that it’s tragic for Louise. 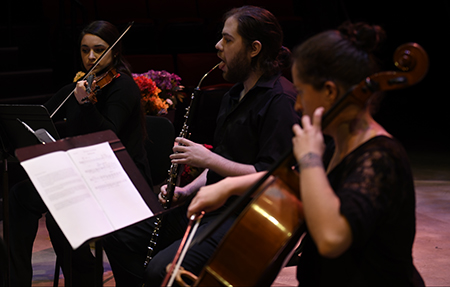 Scored imaginatively for oboe doubling English horn plus string quartet, Scott Little’s opera is a signal achievement for an undergraduate composer. He has a natural feel for setting words, and writes purely instrumental music with an individual voice, adroitly using imitation and other contrapuntal techniques to achieve attractively complex textures. 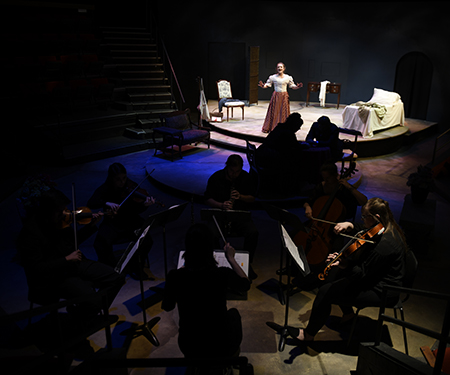 The clear, high-voiced soprano Heather Morrison returned from her Mozart role as Susanna to sing an affecting Louise, and the robust baritone Charles Austin Piper doffed his Almaviva costume and donned a suit to portray the overbearing husband Brentley. The resonant mezzo-soprano Mackenzie Henry made for a compellingly bossy Josephine Richards, Louise’s sister, and Joshua Sanchez Muniz, Henry Hantak, and Natalie Butchko ably supported the principals as Tom Richards, the doctor, and the maid. 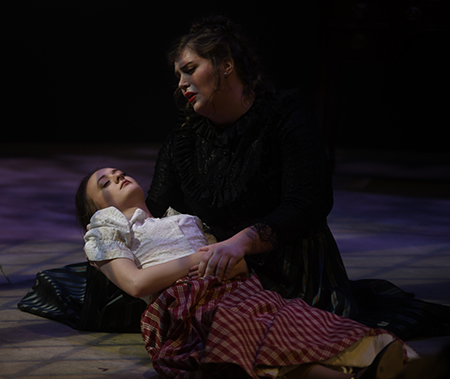 Only one thing was jarring in The Story of an Hour: some spoken dialogue suddenly interrupted the musical flow, and for no apparent dramatic reason. Perhaps Scott Little will rethink that and supply vocal lines instead. This opera has legs, and is well worth that little bit of revision. 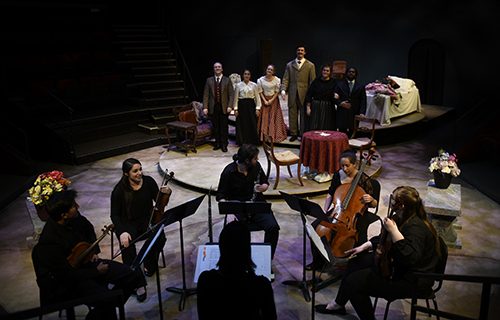