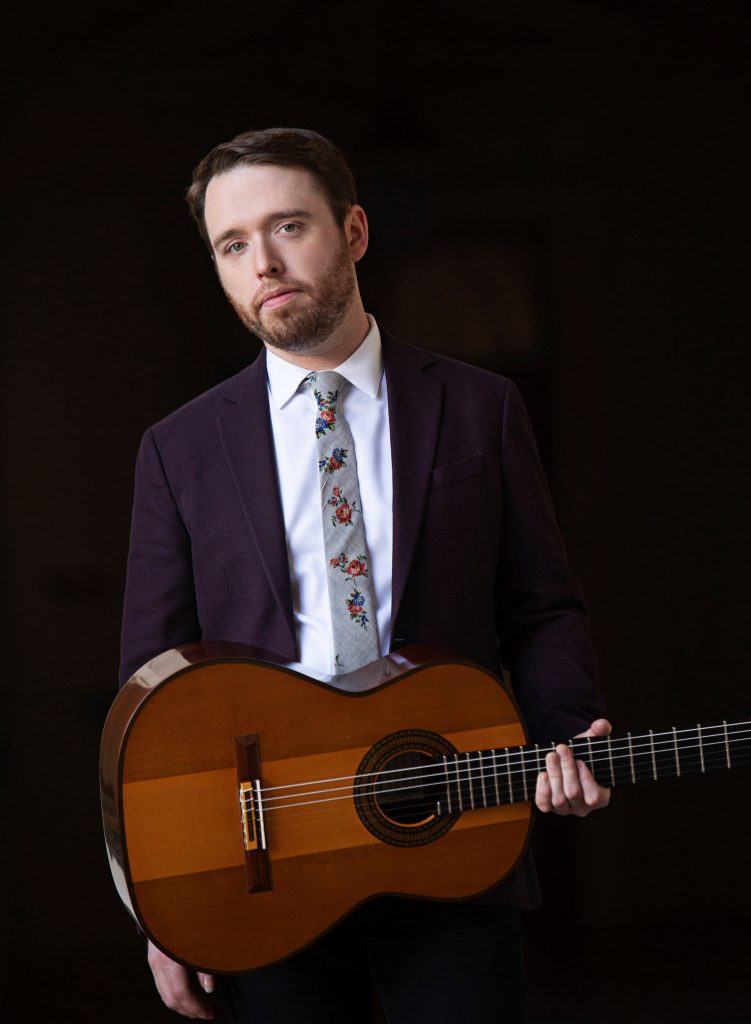 Any classical musician can play familiar favorites or venture into best-kept secrets, but some instrumentalists are predisposed to a healthy mix. Classical guitarists, with their ability to transcribe almost anything, often highlight famous names while also drawing from a canon dominated by 20th-century Spanish and Latin American composers. They also play new music. Last weekend, Colin Davin converted the sunset light of an autumnal early evening into music with a well-curated program that included all of the above.

The concert on Sunday, October 6 was presented by Music from The Western Reserve at Hudson’s Christ Church Episcopal as part of its 37th season. Opening remarks from artistic director Zsolt Bognár promised great things from Davin. Characteristically, the guitarist delivered from the start.

A less thoughtful musician might have treated the “Campo” movement of Ponce’s Sonata Meridional as just another exercise in virtuosity, but Davin brought clear motivating ideas to his rendition. He established tension between headlong rushing and small but significant points of hesitation and reflection. He also divided his palette of timbres, with the bright extroversion of the higher melodies contrasting with plain-speaking low-register figures. The “Copla” middle movement lets the player float a tune over a droning accompaniment; Davin played this like the levitation of clouds, some dark and others sun-ringed, over a darkening landscape. The “Fiesta,” true to its title, proved a feast of colors.

Musical convention decrees that the interval of the second is a dissonance to be resolved, but the Renaissance choristers who enshrined that rule never heard Davin play the opening of Joan Tower’s Clocks. The “ticking” notes of the beginning expand into guitar chords so lush that, dear reader, you may want to listen to the recording by Sharon Isbin — Davin’s former teacher at Juilliard — before continuing. In Davin’s account, these led into a passage of confounding rhythmic complexities that sounded effortless to play. Late in the piece, a succession of major chords pealed forth just as the sun — already low in the sky — burst through the church windows.

Davin gave shape to the diverse characters and ideas that swirl out of the aggressive opening flourish of Leo Brouwer’s El Decameron Negro. Some figurations flew by at such speed in the second movement — a love scene in the hero’s-journey plot — that they became a haze borne aloft in air. The closing ballad movement offers a melody so simple and joyful it could be a pop tune, but as ever, Davin made it sound as intricate and delicate as a glass sculpture.

The resonance of Davin’s guitar, lightly amplified, shed new light on the Prelude of Bach’s solo cello Suite No. 6, from the long ring of its bass notes to the pulsing tension of its dissonances. Davin played Bach’s movements as the Baroque dances that they are, the Allemande and Courante breezing by with ample room left for light ornamentation. On a cello, the beauty in the Sarabande lies with the gradual unfurling of its melody into implied harmony; on a guitar, built to play chords, the best parts are those in which tension and release bleed together, the latter haunted by the former.

The Gavottes and Gigue, flowing and at moments twangy in reflection of their rustic flavor, brought the audience to such an enthusiastic ovation that an encore was inevitable. Davin chose Poulenc’s Les Chemins de l’amour in tribute to the late, great Jessye Norman, with whom he had played the song on multiple occasions. Transposed to a guitar-friendly key, the tune lent itself to some of the lushest playing of the evening.

Supported by engagingly, yet simple staging by Cara Consilvio, a well-prepared cast of singers told the archetypal story of Cinderella with charm and flair. Framing the production was  a sparse but colorful set and wonderful lighting by Dave Brooks. END_OF_DOCUMENT_TOKEN_TO_BE_REPLACED

END_OF_DOCUMENT_TOKEN_TO_BE_REPLACED

The music isn’t easy to play, either. Over the course of two hours, all of the musicians brought fantastic focus to the unrelenting tricky rhythms and countless layers of parts, all of which require a high level of individual responsibility. Even in the moments of calm, the accompaniment remains perpetually unsettled. Adams — who made a sprightly presence on the podium — combines minimalist, repeating motives in gradual layers, which eventually become so dense they overwhelm the senses. Lisa Wong deserves special mention for her thorough preparation of the Cleveland Orchestra Chorus, as does Jennifer Rozsa for the Children’s Chorus, which made a brief but memorable appearance in the last few minutes. END_OF_DOCUMENT_TOKEN_TO_BE_REPLACED