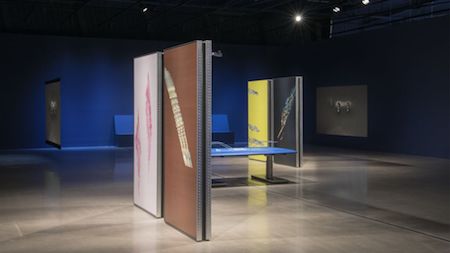 Éliane Radigue creates works that often suit the gallery better than the concert hall. Best known for drone compositions of almost cosmic proportions — OMNHT, her current installation at MOCA Cleveland, runs for several decades before looping — her works tend to defy conventional notions of performance. But last week, Northeast Ohio concertgoers took in a rare experience: hearing some of Radigue’s recent acoustic works for live performers, while seated inside the installation.

OMNHT, a 1970 composition created on Radigue’s signature ARP synthesizer, turns the outer walls and benches of MOCA’s fourth-floor gallery into a sound transducer and the room itself into a speaker as part of the exhibition INDUCTION. When trumpeter Nate Wooley and clarinetist Carol Robinson played excerpts from Radigue’s Occam Ocean as part of NEOSonicFest on April 5, their lines floated within and around the continuous low hums and occasional higher tones that quite literally hung in the air. A collaboration between Radigue and the visual artist Tauba Auerbach, the exhibition itself served as the performance space, with Robinson and Wooley positioned against the vibrating walls or in front of Auerbach’s canvases.

Robinson opened the concert with Occam XVI, playing while seated on one of the benches from which OMNHT emanates. As the musicologist Joanna Demers writes in her book Drone and Apocalypse, “any description of a Radigue work will walk up to the edge where words may go no further.” Words indeed fail to conjure the meditative experience that these live works, paired with the electronic drones, helped create. Long tones emerged from Robinson’s bass clarinet, some low and others high — some audible and others just barely so. An experience that might frustrate or confuse in the recital hall proved compelling in the context of the exhibition.

Wooley’s rendition of Occam X further clarified the effect and appeal of this music. Producing breath tones through the trumpet at first but quickly shifting to a full sound dampened by a wah-wah mute, Wooley drew particular overtones out of each note. These constituent parts of the instrument’s tone can go unnoticed, but here they rang loud and clear. At one point, Wooley played through both the mute and a small metal sheet that split his tone into unrecognizable fragments. Reflecting Radigue’s interest in sound as felt vibration, the performance exposed the trumpet — an instrument so familiar that we may take it for granted — as the kin of the synthesizer and still capable of surprising us. Wooley concluded the performance by switching to the instrument’s lowest attainable pitch and circular-breathing his way through a single long note, while slowly rotating in place.

To close the concert, Robinson and Wooley came together for Occam River III, which recapitulated many of these sounds but added the element of harmony. Robinson played the birbynė, a Lithuanian single-reed folk instrument, and Wooley sticking with his wah-wah mute. Droning together, then splitting into radiant discords, the two lent dramatic shape to a sonic event that rose to a peak of activity, then returned to placid unity.

END_OF_DOCUMENT_TOKEN_TO_BE_REPLACED

Rodgers & Hammerstein’s Cinderella was originally produced for television in 1957 — seven years after the animated Disney film was released — and starred Julie Andrews. According to the Rodgers & Hammerstein website, it was viewed by over 100 million people. END_OF_DOCUMENT_TOKEN_TO_BE_REPLACED

The story line has its origin in an 1855 play and an 1842 farce that Thornton Wilder mined for his 1938 play The Merchant of Yonkers. When that turned out to be a flop, in 1954 Wilder made the crucial decision to re-center the show around the character of the legendary marriage broker Dolly Gallagher Levi and renamed it The Matchmaker. END_OF_DOCUMENT_TOKEN_TO_BE_REPLACED

The Dodero Center for the Performing Arts at the Gilmore Academy in Gates Mills is one feature of an impressive campus. The auditorium is shallow, the stage is deep, and the ensemble played without a shell. Throughout the program, the sound, especially in instruments’ lower registers, tended to disappear. END_OF_DOCUMENT_TOKEN_TO_BE_REPLACED