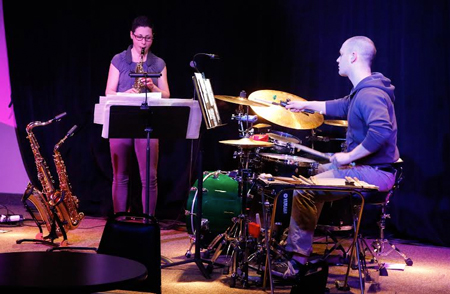 On Friday, April 27 at SPACES, the adventuresome new music ensemble No Exit and the pioneering saxophone and drum set duo Patchwork (left) will celebrate spring with an evening of premieres. The concert will include works by Derrik Balogh, Victoria Cheah, Osnat Netzer, Christopher Stark, and Evan Ziporyn. The program will be repeated on Monday, April 30 at Cleveland State University’s Drinko Auditorium and on Saturday, May 5 at Heights Arts. All three concerts begin at 8:00 pm and are free of charge.

“We’re excited to be able to premiere Christopher Stark’s Ved sjøen (‘By the Sea’),” No Exit artistic director Timothy Beyer said by telephone. “It’s an evocative rumination inspired by the time he recently spent living in Norway. He’s phenomenal and in my mind, one of those composers that everyone should know. I met Chris many years ago when we were both composers in residence at a festival in Salt Lake City. We hit it off, and we’re honored and pleased that he wrote something for us.”

Beyer said No Exit will also be reviving one of the first pieces that the group commissioned, Derrik Balogh’s “gorgeous and immersive” string trio, Fantasie: si tu veux. “We loved it back then and have been wanting to have a chance to do it again. Derek is a Cleveland State alum and he currently works at American Greetings composing music for their cards.”

Also featured will be two pieces by clarinetist/composer Evan Ziporyn: Tsmindao Ghmerto, a work which calls on the musician to play clarinet while simultaneously singing, and Four Impersonations, which incorporates elements of Balinese, Japanese, and East African music.

Beyer added that Victoria Cheah’s We waited for each other on aim “creates a curious and compelling soundscape for the listener to inhabit.”

The director said that No Exit is happy to be “partners in crime,” with Patchwork (Noa Even, saxophone, and Stephen Klunk, drum set). Patchwork will give the world premiere of Israeli-born composer Osnat Netzer’s Zwang und Zweifel, which Beyer described as “a visceral, internal world of conflict and chaos.”

In her composer notes, Netzer writes:

Zweifel means ‘doubt’ in German. Zwang is much more difficult to translate to English. It can mean compulsion, coercion, constraint, pressure, obligation, restraint and force. My piece Zwang und Zweifel explores the inner tumult that happens when one tries to live with a choice between two options, both of which threaten to tear body and mind to shreds. Musically, this is reflected in the musical materials (body) attempting to devolve into chaos and mayhem, while the musical syntax (mind) is rigidly and strictly trying to constrain and control them.

In a separate interview, Noa Even said that Klunk had performed a marimba work by Netzer during his undergraduate studies at BGSU. “Then we met her at a saxophone conference in 2012. She’s based in Boston and teaches at a few schools, including Harvard. It’s funny because she knew my dad, who sings with a group of Israelis every couple of weeks — Osnat played piano for them. So it’s a strange Boston/Israeli connection.”

Even said that since that meeting, she and Klunk kept the composer in mind as someone they’d want to work with in the future. “Osnat came to Cleveland last summer and worked with us for three days, which was an ideal situation because she wanted Steve and I to find the sounds that we like to create. She basically had a sketch of the piece by the time that she left. It’s nine and a half minutes and full of complex rhythmic changes — Stephen made a click track for us to practice with because it is very complicated getting in and out of the rhythms. But there are also sections that are either quiet and intimate, or chaotic. We think people will like it.”

Jackson began the program with a recitation of Langston Hughes’ poem “Helen Keller” — the first of five poems by Hughes that served as interludes between each piece on the first half. END_OF_DOCUMENT_TOKEN_TO_BE_REPLACED

Pianos with pins and tape on strings, a bass drum and tam tam, crotales, Almglocken, and vibes. Microphones were hooked up all around the instruments. The feed was sent to speakers around the room. Lighting designer Nicholas Houfek hung incandescent globes over the arrangement of instruments from thin black wires stretching across the beams. END_OF_DOCUMENT_TOKEN_TO_BE_REPLACED

From the podium, Elim Chan set an ambitious tone for the evening. The rising star conductor, here in her Cleveland Orchestra debut, has a commanding style, and every twist and turn in Saturday’s performance tracked closely with her baton. END_OF_DOCUMENT_TOKEN_TO_BE_REPLACED