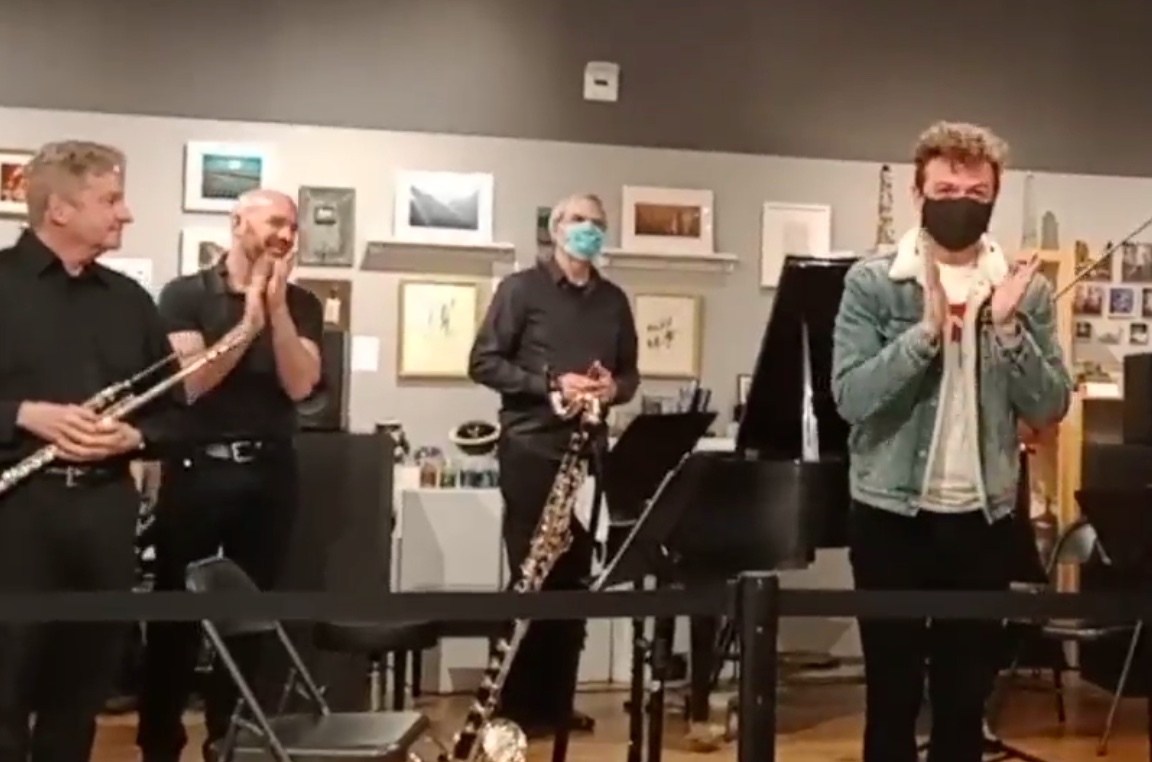 The third iteration of No Exit’s fall program took the ensemble to an intimate venue — the gallery of Heights Arts on Lee Road in Cleveland Heights, where space is at such a premium that percussionist Luke Rinderknecht’s big marimba was nearly marooned offstage, and a few dozen audience members added up to a packed crowd.

That only added to the fun and sense of engagement that’s always embedded in a No Exit concert, and on Saturday evening, October 2, listeners could witness the expertise of the musicians at close hand.

Proceedings got off to a dramatic — and amusing — start with Rinderknecht’s solo performance of Agata Zubel’s Mono-drum (2020). The percussionist began tickling the Gran cassa with brushes, then changed to various drumsticks as the voice of the bass drum gained in intensity. 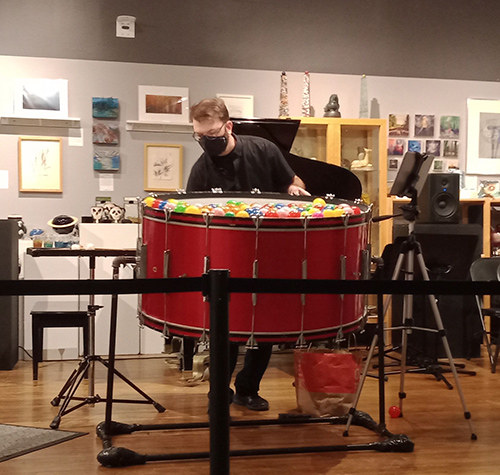 Then he dumped a grocery bag full of multi-colored plastic balls onto the drum head, and proceeded to dislodge them in waves just using vibrations and tilting the drum in its housing. As an unintended consequence, the vibrations knocked a framed piece of artwork on the gallery wall askance — a detail you wish could remain part of the piece. Rinderknecht’s playing was riveting, and the balls became part of the stage set for the rest of the first half. 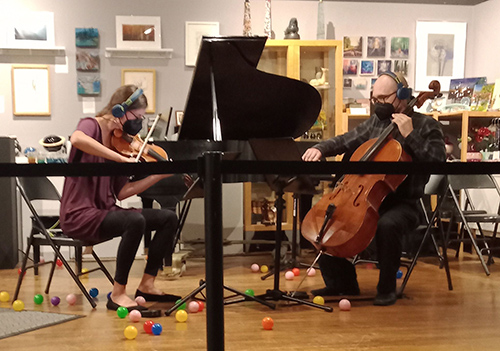 Composer Giuseppi Desiato was on hand to introduce his Transitoria for violin (Cara Tweed), cello (Nick Diodore), and electronics, a short work that layers subtle slides from the strings over what sounds like radio static, but also produces some jarring attacks. It sounded somewhat underdeveloped, even for a piece with its title.

Derrick Balogh was also present to talk about his Lyrical Inventions for Ensemble, which he intended to represent “the experience of standing around a piano with friends or family and sharing a musical moment.” The ensemble’s sharing was based on a two-line score — almost a lead sheet, he said — which left a lot of decisions to the individual players. The result was a four-movement, easy on the ear, folksy creation that definitely sounded like parlor music as it moved through nearly melodic material to unisons, to slow lyrical lines, then to unisons again, ending unsettlingly on an unresolved major 9th.

Artistic director Timothy Beyer’s Amputate III dates back to 2011, and its title foreshadows a fearsome piece of music that, if it doesn’t suggest the experience of having a limb sawed off, at least replicates the kind of feeling you get on a death-defying amusement park ride (this is horrible, but bring it on!) Beyer created the bold and sometimes deafening tape track by recording himself cutting through meat and bone “using antique surgical instruments,” and writes that he intended “to evoke a sense of emotional, psychological, and spiritual amputation” in ruminating on “the experience of profound loss.” 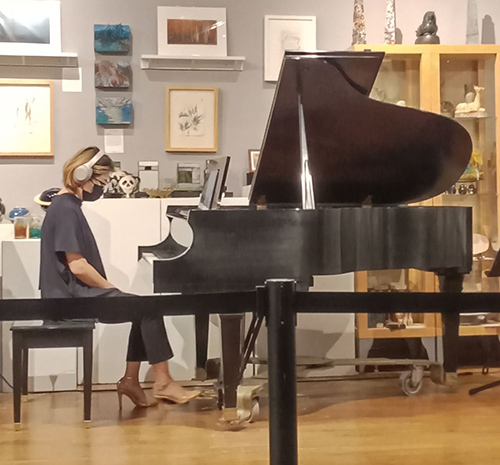 The concert ended with Jiří Trtík’s Forest City, which the Czech composer, who spent four winters studying in Cleveland, came back to hear. Speaking to the audience, his charming introduction invoked the white stillness of a Northeast Ohio winter, under which a lot of unseen activity is going on. 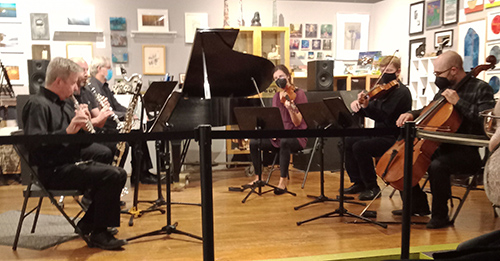 The most developed work on the program, Forest City is full of static, mildly dissonant beauty, crystalline effects, clarinet key clicks, and the occasional broad melody that sounds as though it’s quoting from other pieces, but you’re not sure what. Throughout, pulsing figures both subtle and prominent propel the music, which ends with striking major chords blurred just beyond recognition by added tones. Intriguing to hear for the first time, the piece invites more opportunities to engage with it on deeper levels. Like Cleveland under a blanket of snow, there’s a lot happening just out of sight.

With this work, premiered in 1907, Sibelius offered a bold departure from the explosive emotionalism so prevalent in late-Romantic era music. This symphony was a renewed embrace of Classicism’s purity of form and melody, and one that, oddly enough, left many initial audiences of the day somewhat bewildered. END_OF_DOCUMENT_TOKEN_TO_BE_REPLACED

After eating a Po’boy from The Dawg Bowl Cajun food truck, I caught the first half of Brian Culbertson’s show in The Connor Palace Theatre. END_OF_DOCUMENT_TOKEN_TO_BE_REPLACED