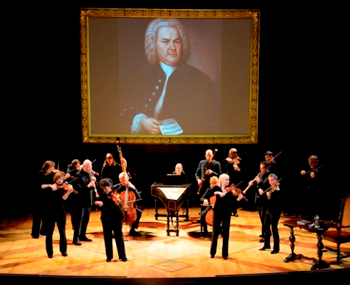 Toronto’s Baroque orchestra Tafelmusik brought its multidisciplinary show “J.S. Bach: The Circle of Creation” to Oberlin’s Artist Recital Series in Finney Chapel on Tuesday, February 28. It’s an impressive celebration of the Thuringian master’s genius in the field of instrumental music, as devised by the orchestra’s bassist Alison Mackay.

The program also looks into the circle of instrument makers and their suppliers who enabled Bach’s music to come to life in performance. Modern versions of those artisans are now plying their trades in time-honored fashion in the service of the historical performance movement.

Bach’s music itself was at the center of the program, brilliantly performed from memory by eleven string players, two oboists, and a bassoonist (the harpsichordist read from a score). The playlist was what one might have heard at Zimmermann’s Coffee House later in Bach’s tenure in Leipzig: single movements from orchestral suites, Brandenburg concertos, and cantatas, along with excerpts from the Goldberg Variations and canons.

Narrator Blair Williams linked the musical selections with a running commentary while colorful projections from the Leipzig Bach Museum provided geographical context. Illustrations of papermaking and string making (metal for harpsichords and gut for string instruments) chronicled the often arduous work that went into creating the components for musical instruments. Tafelmusik explored some of these processes during a fortnight’s residency in Leipzig in the summer of 2014, presumably including the fashioning of strings from sheep intestines. This made for a riveting on-screen episode.

In the course of the narrative, intriguing details about Leipzig life in Bach’s time came to the fore. Who knew that the normally stingy Town Council shelled out for some 700 oil-fueled streetlights on Christmas Eve of 1701 to light the citizenry’s way to coffee houses? Or that Jews weren’t allowed within the city walls except during trade fairs? And that they were constrained to take lodging in a certain street, and made to carry a yellow cloth for identification?

Mackay’s clever arrangements of half a dozen excerpts tailored the music to the forces at hand. The original version of the wedding cantata Weichet nur, betrübte Schatten weaves an elegant oboe line around the soprano soloist, replaced here by the second oboe. Pales’ aria from the hunting cantata Was mir behagt, popularly known as “Sheep may safely graze,” was originally scored for two recorders, mezzo-soprano, and continuo. On Tuesday, oboists John Abberger and Marco Cera fetchingly played the recorder lines while bassoonist Dominic Teresi stepped in for the mezzo-soprano.

Although many of the musical selections were familiar, one not-so-familiar but wonderfully complex Adagio (an arrangement of the alto aria from Cantata BWV 42) was the highlight of the second half of the program. In more vivacious works like the Sinfonia from Cantata BWV 11 that closed the program, Tafelmusik played at lightning-fast tempos with extraordinary clarity. To change things up a bit, violinists spread out into different corners of the hall to create a bit of surround sound in Bach’s d-minor Partita.

Despite all the engaging merits of Tafelmusik’s program, the evening ran long — a tick over two hours including intermission. The whole experience might have benefited from cutting some repeats and distilling the content into a 75-minute, straight-through presentation. As lovely as the music of “Sheep may safely graze” is, there just aren’t enough photogenic wooly creatures to hold the audience’s interest through the Da capo.